Once upon a time, at a public library in San Francisco, a drag queen arrived at story time and read to the children she met there.

The children — no strangers to playing make believe — had fun, and soon the idea of drag queens hosting story time spread to New York.

It was an unconventional idea, both for the normally staid libraries and the drag queens, many of whom were more accustomed to hosting night-life events than M.C.-ing daytime singalongs.

But it quickly caught on.

But as the popularity of drag queen story time has grown, so has the backlash. It has emerged in liberal bastions like Brooklyn and more conservative towns like Cookeville, Tenn., with critics objecting to both the performers and the books they read, which include classic fairy tales and modern parables about inclusion, like “Julián Is a Mermaid” by Jessica Love and “Neither” by Airlie Anderson.

Organizers have been met with sometimes aggressive protests, harassment and death threats.

“I guess the backlash is growing because it is getting more popular,” said Jonathan Hamilt, who co-founded Drag Queen Story Hour, a New York-based nonprofit that has helped organize many of the events. He also did the first New York event in 2016 as his drag alter ego, Ona Louise. “But the love and support for Drag Queen Story Hour has trumped the hate, even though both have grown.” 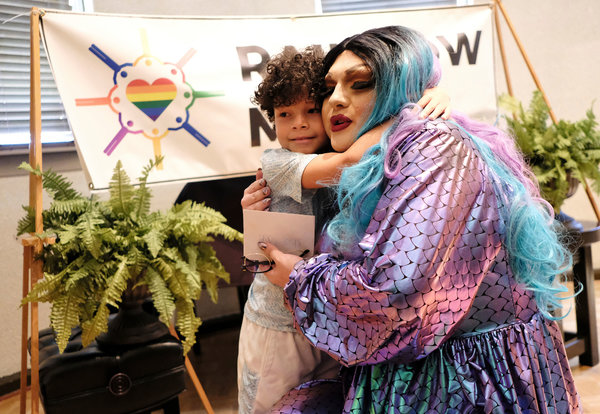 The backlash entered the halls of the Ohio State House last week when Speaker Larry Householder condemned drag queen story time in a letter to the Ohio Library Council. He called the events “a stunningly bizarre breach of the public trust.”

His letter says he respects the First Amendment, and adds “I can also assure you the taxpayers aren’t interested in seeing their hard-earned dollars being used to teach teenage boys how to become drag queens.”

“With such a wide spectrum of information and ideas available, it is not surprising that some programs may not align with everyone’s personal values or perspectives,” it said. “However, under federal law, public libraries do not discriminate nor regulate the content of speech.”

The Drag Queen Story Hour nonprofit has 35 chapters in the United States and five overseas, Mr. Hamilt said. And drag performances for children, unaffiliated with the organization, have become more common across the country in recent years.

“Wherever we go there is a big community who come out — especially in more rural or conservative areas, people come from farther away to support our events because nothing like this has happened there before,” Mr. Hamilt said. “There is a big need for it in areas that aren’t liberal big cities.”

“The statistics of the L.G.B.T. community and how many people might be in it don’t change because of your ZIP code and your population density,” said Ms. Bean, who lives near Sparta, population 5,029. “There are L.G.B.T. people here who need us.”

The chapter’s first event in Cookeville, Tenn., in December was a “low key” affair that included many L.G.B.T. families, she said. But she said the next event in January was “absolutely, completely overwhelmed with both protesters and supporters.”

“We had 150 to 200 protesters outside the little itty-bitty library in Putnam County and we had about 250 supporters,” she said. “The protesters actually came into the library and flooded the room so we couldn’t get many kids or families in.”

Ms. Bean said the event left the library after that and was hosted for a few months at an expensive private venue, whose owners were flooded with negative online reviews and angry emails and phone calls from critics who said the event was organized by “perverts” with sinister motives.

“There is no hidden agenda or meaning behind it,” Ms. Bean said. “We are not trying to breed drag kids.”

Drag Queen Story Hour had to leave that venue, too. It was briefly held at a conference center before organizers decided to go on hiatus. Ms. Bean said they were “hoping against hope that some of the hoopla has died down so we can go back to the library where we belong.”

In Houston, organizers disbanded a drag event unaffiliated with the nonprofit after a series of unnerving events that included death threats, the removal of an armed protester from a reading, and the revelation that a past performer was a registered sex offender. (The organizers said background checks had not been conducted on its earliest performers.)

Edie Pasek, who organizes story hour events in and around Milwaukee, said her readings had been “protested like the dickens,” especially in smaller cities like Oak Creek, Wis., and Zion, Ill. But she said she and the performers tried to stay focused on the point of Drag Queen Story Hour.

“We want to teach the kids acceptance, not bullying, learning to make good choices, how to be nice to other people,” she said. “I have a 6-year-old daughter and whatever I think we need to teach her is what we bring to story hour.”

Ms. Pasek said her group holds about a third of its events in libraries and a third in churches, where dozens of children sometimes show up.

“In the Midwest, we do drag in churches,” she said. They also hold events in private venues, like a popular Milwaukee cat cafe. “Let me tell you, people really love cats and drag.”

But protesters tend to show up wherever they go. Sometimes the protests upset the children, who are usually too young to understand the banner and chants, Ms. Pasek said.

She said her performers had developed “a little spiel” to explain all the ruckus to their young audience.

'Enough is enough': China slams US at Security Council over coronavirus