Home » Americas » Does the militarisation of US police encourage excessive force?

Does the militarisation of US police encourage excessive force?

Groups say ‘equipping police in manner more appropriate for battle may put them in mindset conflict is inevitable’. 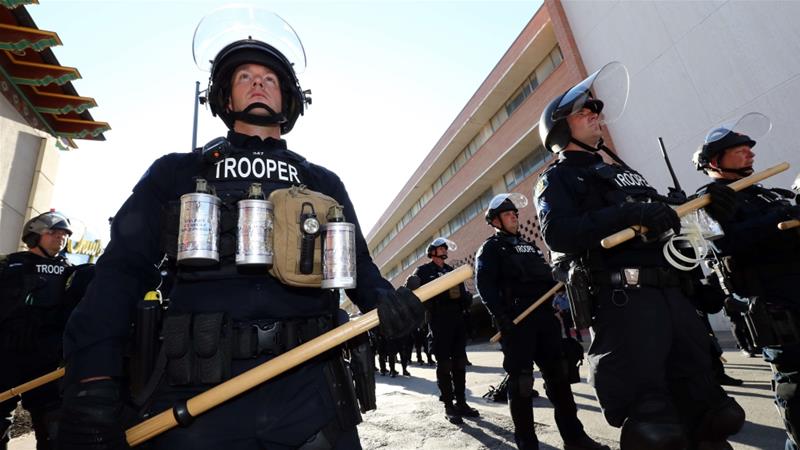 Images and videos of police across the country allegedly beating and shooting demonstrators, members of the media, medics and bystanders with projectiles, tear gas and flashbangs have inflamed tensions after George Floyd, an unarmed Black man, died in police custody in Minneapolis, Minnesota, last week

Many of these scenes feature police officers dressed in full body armour and carrying shields as vehicles that look more like tanks than cruisers flashing red and blue lights roll by.

The US police force is heavily militarised, thanks to the transfer of surplus military goods to law enforcement departments across the US for decades.

The scenes playing out across the US today have renewed worries that the militarisation of police has created a climate among law enforcement that encourages excessive force.

“In city after city, we are witnessing actions that could be considered unnecessary or excessive force,” said Rachel Ward, national director of research at Amnesty International USA.

“Equipping officers in a manner more appropriate for a battlefield may put them in the mindset that confrontation and conflict are inevitable,” Ward said in a statement on Saturday.

Some protesters experience this first-hand. Haley Pilgrim, a member of Resource Generation, a “multiracial membership community” of people aged 18-35 who aim to create a world that “is racially economically just”, was present at demonstrations in Philadelphia, Pennsylvania, on Friday.

Pilgrim told Al Jazeera she saw police using batons on demonstrators and was “whipped” to the ground as she filmed the demonstration.

“Without a doubt, there was more police force. I’ve never seen up close batons being used, multiple times, being used on protesters,” said Haley, who has been active in organising for eight years.

While images of police cars burning were shared widely on social media, Pilgrim said that did not occur until law enforcement began acting forcefully with demonstrators.

“The protesters didn’t come to be violent,” she added. “We had posters and microphones … Cops came with shields and batons”.

Philadelphia police did not respond to Al Jazeera’s request for comment.

The police officers with whom Pilgrim dealt directly were not wearing riot gear, but law enforcement donned the equipment as protests escalated in the city and looting began.

The US has transferred excess military equipment to police forces under the current system since at least 1990. The National Defense Authorization Act of 1990’s section 1208 authorised transfer of military-grade to “federal and state agencies”, according to the law. The equipment was meant to be used in police actions against drug use and sales.

But the National Defense Authorization Act of 1997 saw the expansion of the programme to include “all law enforcement agencies to acquire property for bona fide law enforcement purposes that assist in their arrest and apprehension mission”, though counter-drug operations were still given preference. 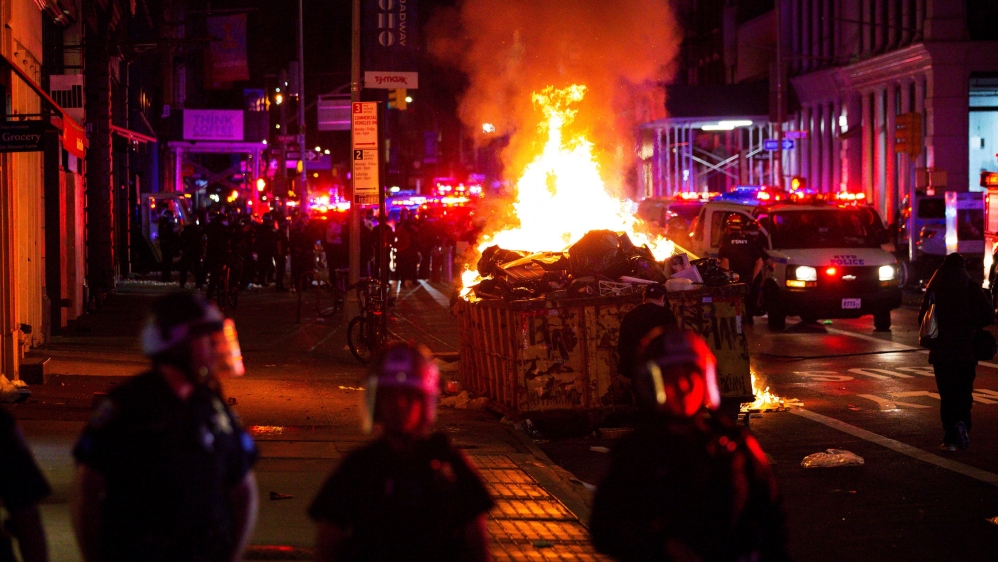 The programme provided these weapons, at times without cost, to roughly 8,000 police departments across the US, according to the programme’s website.

In recent years, Granite City, Illinois, with a population of roughly 30,000 people, received 25 M16 and M14 rifles, an armoured truck and a robot for “explosive ordinance disposal”, according to Forbes.

Former President Barack Obama signed an executive order in 2015 that limited what items could be given to police under the programme. Before that, “even bayonets and grenade launchers” were available, HRW wrote.

While Obama was lauded for this order, an investigation by left-leaning paper In These Times found that it did little to stem the flow of combat gear to police.

President Donald Trump, who has called for governors to handle the protests with more force, meanwhile, has continued to provide military equipment to police forces across the country.

US police forces not only receive weapons from their own military, many also receive training from Israel’s military, which has been accused of grave rights abuses against Palestinians.

Israel’s national police, military and intelligence services have provided training on crowd control, use of force and surveillance to thousands of members of US law enforcement over the years.

This training has occurred in the US, Israel and the occupied Palestinian territories.

This training placed US law enforcement employees “in the hands of military, security and police systems that have racked up documented human rights violations for years”, Amnesty International wrote in 2016, citing alleged extrajudicial killing, surveillance and excessive use of force, among other violations.

While the “structures of policing in the US and Israel are meant to ensure that Black and Palestinian people are never treated as fully human,” Wahbe said, the violent tactics seen today in the US extends beyond the Israel-US exchange programmes to “slave patrols in the Antebellum South, the Black Codes during Reconstruction, the Jim Crow era, the War on Drugs, and the Prison-Industrial Complex”.

Though policing is inherently anti-Black and in Israel, anti-Palestinian, Wahbe claimed, what is happening is not about “who teaches who the strategies of surveillance and violent policing … it’s about recognising the rise and entrenchment of a transnational police force that criminalises and violently suppresses any threat to its hierarchies of power – hierarchies that are predicated on anti-Blackness.”

She concluded: “The structures of law enforcement as we know them must be abolished.”