Weather: Mostly sunny, with a high around 70. 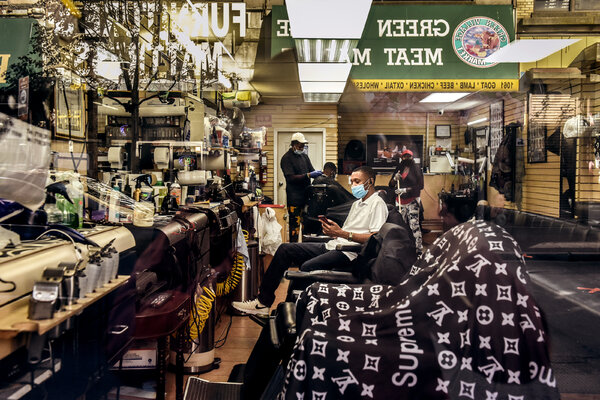 As schools and many businesses reopened across New York City, several neighborhoods began to see worrisome upticks in coronavirus cases. One day last week, the daily rate of positive tests rose to 3.25 percent, the highest it had been in months.

In response, Mayor Bill de Blasio proposed on Sunday to roll back the reopening in nine ZIP codes and suggested restrictions in 11 others where the rate of positive tests was trending upward.

But the proposal needed the approval of Gov. Andrew M. Cuomo, and on Monday, he failed to give it.

The scramble to contain the virus in New York City comes as the number of new daily cases reported across the United States has been slowly rising, and as the status of President Trump’s own battle against Covid-19 has remained unclear.

Here’s what else you should know:

Mr. Cuomo agreed that schools in the hot spots should close, but not nonessential businesses, calling the move “arbitrary and capricious.”

[What it’s like living in nine parts of New York City facing a new lockdown.]

But the governor accelerated the plan to close schools in the affected areas.

Mr. Cuomo chose to close schools on Tuesday instead of Wednesday.

“I’m not going to recommend or allow any New York City family to send their child to a school that I wouldn’t send my child to,” Mr. Cuomo said.

Mr. Cuomo also announced that the state would take over enforcement of mask and social-distancing rules in some areas.

Earlier this year Mr. de Blasio faced accusations that the police department was disproportionately penalizing Black and Hispanic people for social-distancing violations. He reined in police enforcement for social distancing in favor of community-based efforts.

These announcements threatened to deepen tensions between Albany and City Hall.

Mr. Cuomo’s announcement appeared to be the latest episode in his long-running feud with Mr. de Blasio.

Mr. de Blasio held a press event shortly after Mr. Cuomo’s finished, during which he said he intended to proceed.

“Until we hear otherwise,” Mr. de Blasio said, “our plan is to move ahead Wednesday morning with enforcement in those nine ZIP codes.”

The rate of positive virus tests is increasing in neighborhoods with large Orthodox Jewish populations.

Sizable Orthodox Jewish communities reside in many of the hot spots.

Some of those communities have held large public gatherings with few precautions, and the city has also closed yeshivas, private Jewish religious schools, for failing to follow public health regulations.

Mr. Cuomo said on Monday that he would not tolerate religious groups’ breaking the rules.

“This cannot happen again,” Mr. Cuomo said. “If you do not agree to enforce the rules, then we’ll close the institutions down.”

N.Y. City Council Votes to Expel One of Its Own for 1st Time in Memory

The New Museum Is World Class, but Many Find It a Tough Place to Work

Police officers responding to a shots-fired call in the Bronx struck and critically injured a woman with their car. [Daily News]

And finally: Keeping the Cyclone ready for when crowds return

Coney Island is synonymous with summer in New York. Yet its amusement parks — including Luna and Dino’s Wonder Wheel — have sat empty for almost a year.

Since the season ended in October last year, Coney Island’s amusement parks have remained closed even as similar venues in the region have reopened. More than a thousand seasonal and full time workers are out of a job.