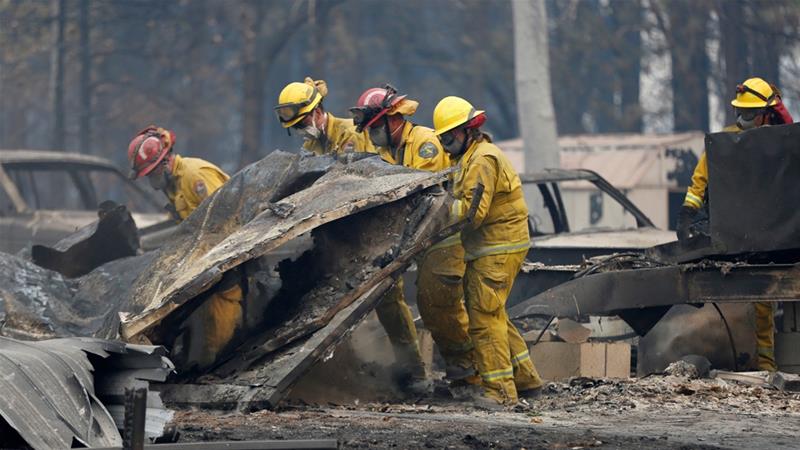 The death toll from the most destructive fire in California’s history has risen to 48 after six more bodies were recovered from homes in Paradise, while relatives and friends of the missing are desperate for information.

The total count of the victims of the blaze, dubbed Camp Fire, in the state amounted to 50, as two bodies were recovered hundreds of kilometres to the south in the scorching path of another fire, named Woolsey, near Malibu.

“One of the hardest parts of this particular job is to provide you with an update on the recovery of human remains,” Butte County Sheriff Kory Honea told reporters on Tuesday.

Honea said that 100 National Guard troops would join the efforts of forensic teams and sniffer dogs, as they continue the search through incinerated town of Paradise. 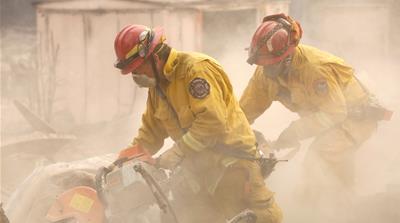 “We’re finding remains in various states,” he told reporters. “People have been badly burned. Some of them, I assume, have been consumed.”

He has reported that 228 were still missing but they are hoping to produce a list of missing persons soon and ask the public’s help to determine if it accurate.

The winds are expected to drop in the next 24 hours while “more favourable conditions” and “potential rain” in the middle of next week, have been forecasted by the meteorologist in the “Camp Fire” impacted area.

“The air quality will be poor” especially in the mornings, warned Aviva Braun, a National Weather Service meteorologist, but it will get better in the afternoons.

The blaze has now been 35 percent contained, according to officials after it destroyed more than 54,000 hectares, incinerating more than 8,800 structures, 7,600 of them homes.

Around 52,000 people were evacuated from the area and more than 1,000 are at evacuees’ shelters.

Steve Kaufmann, spokesperson for CalFire said that 5,615 personnel continued to fight the blaze on Tuesday.

The latest weather forecast for California said that the conditions were improving, promising strong winds that would progressively weaken on Wednesday and Thursday, but some mountains regions would remain under critical fire risk.

“The vegetation is like tinder wood, ignited by the smallest spark. The forecast isn’t promising, with no rain on the horizon and the air expected to stay very dry, but at least the winds are finally relenting. On Wednesday the winds will still be blustery, but not quite as strong.

“Without any rain and with the persistence of dry air there are likely to be more fires, but without the strong winds the flames will not spread as quickly,” Gaulter said. 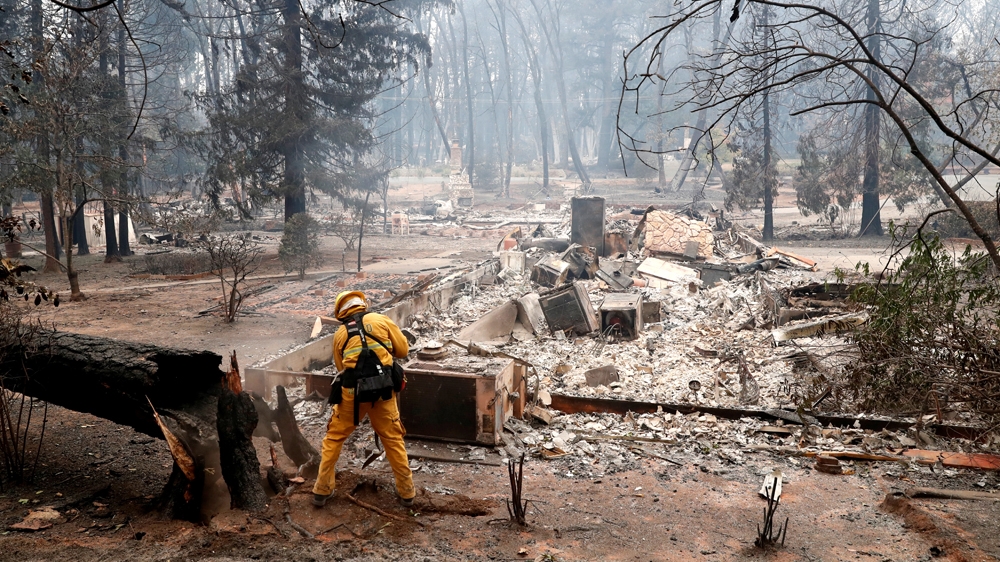 The Ventura fire Captain said that “Woolsey Fire” in the south which has burnt more than 39,000 hectares and destroyed at least 435 structures, has been 40 percent contained but “there are numerous hotspots”.

Despite the gusty winds, low visibility and rough terrain it was a “successful day”, Captain Brian McGrath told reporters in a briefing.

“We’re starting to get a handle on this fire,” he said.

“I’m not feeling nearly the amount of wind and it’s a little bit cooler this morning,” he said on Tuesday.

Some residents were allowed to return to affected neighbourhoods on Tuesday, including in parts of Malibu.

Tens of thousands are still under evacuation orders.

Actor Gerard Butler posted a photo on Instagram in front of his “half-gone” Malibu home encouraging people to support the “brave men and women” of the firefighting units.

“Heartbreaking time across California. Inspired as ever by the courage, spirit and sacrifice of firefighters. Thank you,” he wrote.

Despair in the north

A message board in one of the 1,385 evacuees’ shelters is filled with photos of the missing and pleas for information about relatives and friends, according to the Associate Press news agency.

“I hope you are okay,” reads one of the many notes on the board, while another says “if seen, please have him call” next to a picture of a missing man.

Butte County Sheriff Honea said that some remains may not be found before residents start returning to their intact homes.

“We want to be able to cover as much ground as quickly as we possibly can,” he said.

“This is a very difficult task.”

Taylor, a 72-year-old Vietnam veteran who walks with a cane said that the flames were at the back of his house when he received a call to evacuate immediately, Associate Press reported.

He sprung into actions, rushing to leave with nothing but the clothes he was wearing and he tried to convince a neighbour to get in his car but the neighbour declined.

Almost a week later, he still didn’t know what happened to him.

Greg Gibson was at the message board on Tuesday, also trying to locate his neighbours, according to the Associate Press.

“It happened so fast. It would have been such an easy decision to stay, but it was the wrong choice,” Gibson said from the Neighborhood Church in Chico, California.

On Sunday, he had told reporters that with the level of destruction, “Camp Fire” brought upon the county, “it’s very difficult to determine whether or not there may be human remains there.”

According to officials, the forensic units are using portable DNA identification devices which can produce results in a couple of hours, rather than days or weeks.

Frank DePaolo, a deputy commissioner of the New York City medical examiners’ office said that “in many circumstances, without rapid DNA technology, it’s just such a lengthy process.”

Officials are advising “extreme caution” when people return to a recently burnt area.

The indications of P1 and P2, marked on trees, mean that they are hazardous.

Furthermore, the Butte County sheriff’s office said there have been reports of more than 200 suspicious incidents, 18 of them linked to looting.

Two men were arrested on Monday for allegedly looting a residence within an evacuated area and being in possession of a gun.

US Interior Secretary Ryan Zinke and California Governor Jerry Brown were scheduled on Wednesday to pay a visit to the disaster areas.

Zinke talked of “gross mismanagement of forests” due to “environmental terrorist groups” which are forcing strict harvest restrictions when he toured California’s earlier fire incidents in August.

The origins of both the Camp and Woolsey fires were listed as under investigation. 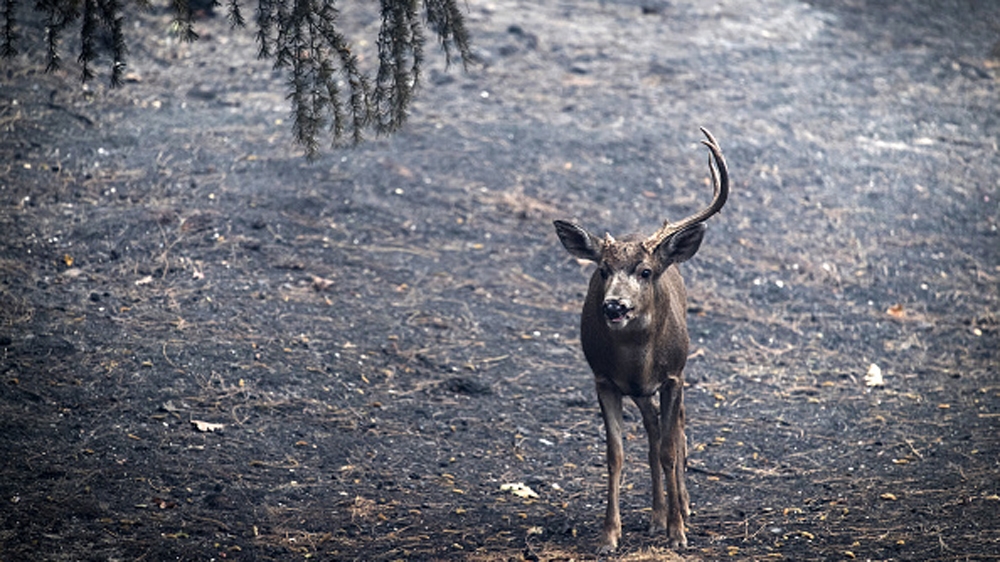 A deer with a broken antler stands during the Camp Fire in Paradise, California [David Paul Morris/Getty Images]