If you’re among the hundreds of thousands of Californians ushering in the Year of the Pig this week, happy New Year!

East Asian communities around the state are celebrating, with parades, festivals and family gatherings at home. (Here’s a list of events in Southern California, and one for the Bay Area.)

It has also been interesting to watch in recent years how businesses have worked to scoop up some of the spending around this major global holiday.

Disneyland, which draws tourists from around the world, unsurprisingly, goes big. But one story about Lunar New Year at South Coast Plaza, the luxury retail palace in Costa Mesa, has stuck with me since the days I covered Orange County.

Back in 2013, American marketers had just started to turn their eyes toward exploding wealth in China. South Coast Plaza, however, had been courting shoppers from China for years.

And although China has continued to ascend, a lot has changed since then. So last week I checked back in with Yong Chen, a history professor at U.C. Irvine who has focused on Chinese and American cultural relations, about shopping for the Lunar New Year.

He said that while Lunar New Year was still one of the biggest travel and shopping holidays in China, there was no denying that strained relations between the world’s two biggest economies had put a damper on Chinese tourism — and spending — in the United States.

Dr. Chen said that in the last few years the Chinese government had cracked down on things like wire transfer limits — which he said had long existed but were infrequently enforced — and on travel for the specific purpose of buying luxury goods to resell.

The resold goods amount to “a multibillion-dollar market,” he said. “Even though millions of people come to the U.S. and to Europe every year, still more people cannot afford to come on a regular basis — so if they need a Gucci bag, it’s a lot more expensive in China.”

Still, Debra Gunn Downing, South Coast Plaza’s spokeswoman, wrote in an email that she was optimistic. The number of stores within the mall offering New Year deals or products has more than doubled in the last few years, she said.

“We anticipate that visitor traffic to South Coast Plaza through the month of February will continue to be robust,” she said. “Especially because of the trifecta of Lunar New Year, Valentine’s Day and Presidents’ Day weekend.”

(A note: We often link to content on sites that limit access for nonsubscribers. We appreciate your reading Times stories, but we’d also encourage you to support local news if you can.) 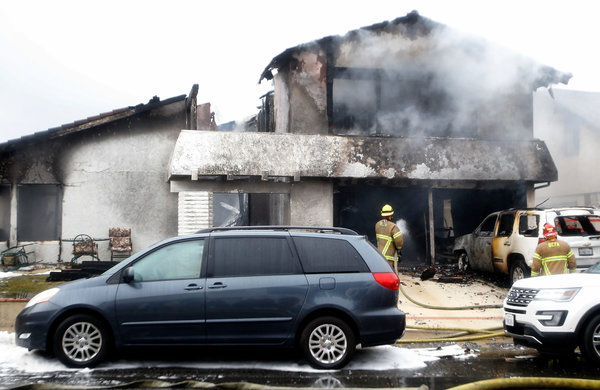 • Four people in a Yorba Linda home and the pilot of a small plane died on Sunday when the aircraft crashed into the house, injuring two others and spraying debris across several blocks. [The New York Times]

• When Facebook employees woke up on Wednesday, they couldn’t check their work calendars, or find their co-workers on an internal map. They couldn’t check what the cafeteria was serving that day. It was all because of what was essentially a power move by Apple. It was a stark reminder of where power lies in the tech world. [The New York Times]

• Still, slumping demand for Apple products in China is one warning sign that trouble could be ahead for the broader tech industry. [The New York Times]

• The Patriots beat the Rams to win their sixth Super Bowl. But the game, the lowest scoring ever, was b-o-r-i-n-g. [The New York Times]

• What unites Democratic presidential hopefuls? They’re sorry for that thing they said or did before they were running. Senator Kamala Harris, for her part, has said she regrets some of the positions her office took when she was state prosecutor. [The New York Times]

• Teachers in the Central Unified School District in Fresno took a step toward striking last week. The protest follows the teachers’ strike in Los Angeles, where educators pushed for more support and better pay. [The Fresno Bee]

• The town of Arbuckle is sinking, new data shows. And parts of Yolo County could soon have the same problem. [The Woodland Daily Democrat]

• “We were interested in Diana as a character who starts with one dream and actually gets it, and then has to find a new dream.” A musical about the marriage of Prince Charles and Lady Diana Spencer is set to be staged at the La Jolla Playhouse, a major Broadway feeder. [The New York Times]

• Meet the (adorable) burrowing owls of the Coachella Valley. [The Desert Sun]

Above, I mentioned the variety of ways people are celebrating Lunar New Year across the state. Tejal Rao, our California food critic, sent this mouthwatering dispatch from one celebration:

Last month, I went to a sunny green field in West Compton, to report a story with the chef Diep Tran. She had organized a party for about 100 women for Tet, or Vietnamese New Year. Side by side, everyone came together to shape beautiful palm-size banh chung — traditional rice cakes filled with pork cured in fish sauce, shallots and mung beans, all encased in banana leaves — then cooked them collectively in pressure cookers on portable stoves.

The crowd was an intergenerational mix of women, many of them with roots in Vietnam, South Korea, China and Taiwan, and many of them making banh chung for the very first time.

You can read more about the day here.