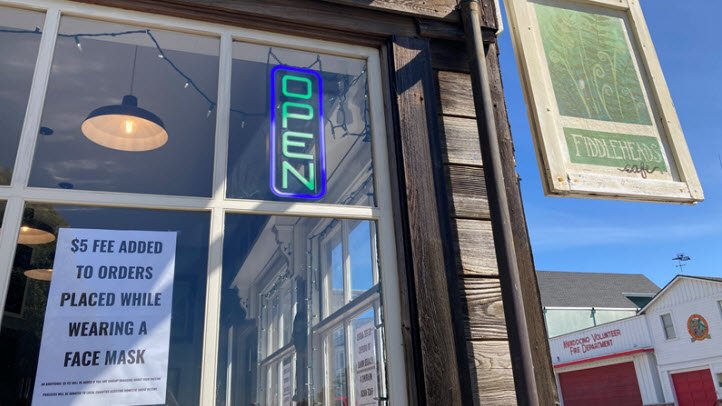 A cafe in northern California is charging customers $5 if they wear a mask to the establishment. Fiddleheads Cafe in Mendocino put up a sign announcing the fee for customers who wear face coverings while placing their orders.

The owner, Chris Castleman, 34, put the sign up on the window last weekend.

‘I don’t think $5 to charity is too much to ask from mask wearing customers who claim to care so much about the community they live in,’ Castleman told NBC News on Friday.

Money collected from the cover charge of sorts will go to Project Sanctuary, an organization combatting domestic abuse, for two weeks. Then another nonprofit will get funds.

‘It’s about time that the proponents of these ineffective government measures start paying for the collateral damage they have collectively caused,’ the owner said.

Fiddleheads Cafe in March put up a sign stating that customers who threw their face masks in the trash would get 50% off their orders.

The restaurant also planned to charge an additional $5 fee to those “caught bragging” about being vaccinated, according to a couple of the posted signs.

Castleman told NBC News that he doesn’t ‘force anyone to pay’.

‘I give them the freedom of choice, which seems to be a foreign concept in these parts of the country,’ he said.

Castleman closed the cafe in June 2020 after local officials said face masks were not optional during the pandemic.

‘The government shut everything down,’ Castleman said. ‘Everyone wearing a mask is complicit.’