Home » Americas » Boy, 5, struck and killed 'after mom's boyfriend threw him out of car at night'

Boy, 5, struck and killed 'after mom's boyfriend threw him out of car at night'

A five year-old boy was struck and killed after his mother’s boyfriend stopped their car and made him get out to punish him for misbehaving, investigators say. Austin Birdseye died in Russell County, Alabama, on Sunday night after his mother’s partner Bryan Starr, 35, pulled their car over by a church and ordered Austin out.

The youngster then wandered onto the nearby Highway 165, where he was struck by a passing vehicle. Austin was rushed to Piedmont Columbus Regional Hospital, where he later died. Starr said he stopped the car because Austin was ‘being unruly’ and claims to have lost sight of the boy in the dark and rainy conditions.

It is unclear how long Austin had been out of the car for before he was hit, with Russell County Sheriff’s Office now combing local surveillance cameras to try and confirm a timeline. Austin’s mother Christina was not in the car at the time of the incident, which happened a few miles away from the home she shares with Starr.

Russell County Sheriff Heath Taylor told WRBL: ‘It’s just horrific. I can’t imagine the mother’s grief that she is going through. It’s just tough. What do you say to that? What is your thought process when you tell a five-year-old to get out of the car on a rainy night because they were loud in the car? It’s just heartbreaking.’

Sheriff Taylor said no charges would be brought against the unidentified driver who struck Austin. Starr, a US Army soldier stationed at Fort Benning who served one tour of duty to Iraq, has been charged with reckless murder.

A GoFundMe page set up to pay for Austin’s funeral said: ‘Austin was always the center of any impromptu living room dance party, the wonderful little boy who would chat about almost anything and with anyone in the grocery store, the one who knew all the words to every song as he sung them at the top of his lungs while in the car.

‘He was always loving and never let any opportunity pass him by to enjoy fun.’ 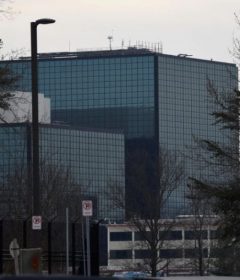