WASHINGTON — Joseph R. Biden Jr. has established a steady lead over President Trump in Arizona, a traditionally Republican but fast-changing state that is tilting increasingly Democratic, according to a new New York Times-Siena College poll.

Mr. Biden leads Mr. Trump 49 percent to 41 percent in Arizona, with just 6 percent of likely voters saying they were undecided, according to the survey, which was taken before and after the president announced that he had tested positive for the virus that causes Covid-19 but after his caustic debate performance last week. The poll has a margin of error of 4.2 percentage points.

The results are essentially unchanged from a Times-Siena poll of the state last month, which found Mr. Biden leading 49 percent to 40 percent. The poll illustrates the depth of Mr. Trump’s difficulties in Arizona — an incumbent Republican president trailing by a significant margin a month before an election in which most voters have made up their minds.

With Arizona beginning early voting and sending out mail ballots this week, Mr. Trump is running out of time to improve his standing in a state that last supported a Democrat for president in 1996.

Mr. Biden is being propelled by women, younger voters and Hispanic people, a coalition of the ascendant constituencies reshaping the politics of a state that Mr. Trump carried by about three and a half points in 2016.

Mr. Biden is winning women by 18 points and trailing Mr. Trump by only two points among men. Among likely Hispanic voters, who are expected to make up about 20 percent of Arizona’s electorate, Mr. Biden is overwhelming the president, capturing 65 percent to Mr. Trump’s 27 percent.

In a sign of a brewing suburban backlash against the president, Mr. Biden’s lead in Maricopa County, the Phoenix-anchored population hub of the state, matches his statewide advantage. He’s leading by nine points in the county, which accounts for over 60 percent of the state’s population. It’s highly difficult to win Arizona without winning Maricopa, which Mr. Trump captured by three points in 2016.

The president’s standing with female voters and independents in the state has plunged since his victory four years ago, and, significantly, there appears to be far less interest in third-party candidates this year.

In 2016, over 7 percent of voters cast a ballot for somebody besides Mr. Trump and Hillary Clinton. This time, only 3 percent of likely voters said they planned to support the Libertarian Party nominee and just 1 percent said “somebody else” in the survey. Those third-party votes were pivotal to Mr. Trump, who only garnered 48 percent of the vote in Arizona.

The G.O.P.’s challenge in Arizona this year runs beyond the presidential race. The retired astronaut Mark Kelly, a Democrat, is leading Senator Martha McSally, a Republican, 50 percent to 39 percent in the Times-Siena poll, a slightly larger advantage than in last month’s survey. Mr. Kelly was winning 50 percent to 42 percent in September.

Both Democrats are benefiting from the alienation some more moderate Arizona Republicans feel toward the hard-line, Trump-led party. 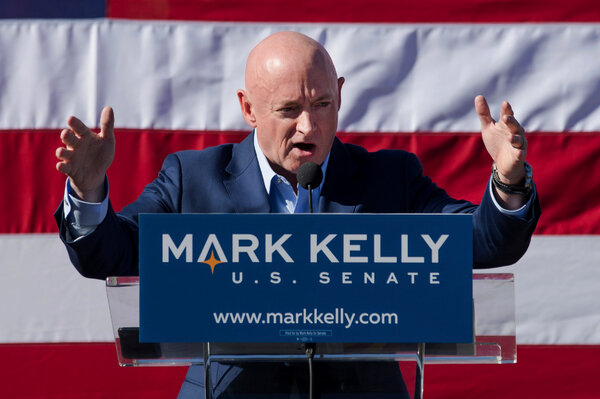 Long-simmering divisions between conservative and center-right Arizona Republicans have boiled over this year, with Jeff Flake, the former senator, and Cindy McCain, the widow of former Senator John McCain, both endorsing Mr. Biden. At the same time, a far-right Republican who challenged Mr. McCain in his last election, Kelli Ward, has taken over the state’s Republican Party.

After Ms. McSally was defeated by Senator Kyrsten Sinema in 2018, she was appointed to the seat held by Mr. McCain. But Mr. Kelly has far out-fund-raised Ms. McSally, and Mrs. McCain has pointedly declined to take sides.

Mr. Trump’s relatively narrow margin of victory in Arizona four years ago made clear the state was undergoing a political metamorphosis and Ms. Sinema’s victory there in 2018 left little doubt it would be hotly contested this year.

But even the most optimistic Arizona Democrat may not have guessed Mr. Biden would be this strongly positioned going into the final weeks of the race. As in other states with a mix of suburban and nonwhite voters, though, it is antipathy toward Mr. Trump that’s driving the race in Arizona. Forty-eight percent of likely voters say they strongly disapprove of Mr. Trump’s job performance, with over half of all female voters saying as much.

Fifty-two percent of Arizonans said they believed Mr. Biden would do a better job unifying the country while 37 percent of the state’s likely voters said they thought Mr. Trump could do so more effectively.

As Mr. Trump remains at Walter Reed Medical Center after he contracted the coronavirus, 54 percent of Arizonans said they believe Mr. Biden would do a better job handling the crisis while 40 percent of the state’s likely voters said they preferred Mr. Trump.

Mr. Trump is more competitive on the question of whom voters prefer on the economy and issues of law and order. But Arizonans said they trusted Mr. Biden more on picking a Supreme Court justice.

However, more voters supported than opposed the nomination of Judge Amy Coney Barrett, whom Mr. Trump appointed to the high court late last month: 42 percent of Arizonans said they supported Ms. Barrett, 37 percent opposed her and 21 percent said they were undecided.

Here are the crosstabs for the poll.