For years, screens have replaced notebooks, keyboards have subbed in for pens and digital life has revolved around the printed word.

But at a small school in Maine, cursive handwriting thrives, with two students recognized in a national contest last week for their skills crossing T’s and dotting I’s with precise and legible shape, size, spacing and slant.

The students, from the town of Woodland, won awards in the Zaner-Bloser National Handwriting Contest, which is open to students from public and private schools in kindergarten through the eighth grade. The students learned how to properly loop their L’s at Woodland Consolidated School, which has a history of winning awards in the contest.

Allison Grace St. Peter won the national award among third graders, and Christian Vargas, who is in seventh grade, won the cursive Nicholas Maxim Award for special-needs children. With their victories, the Woodland school became the first school to have both a grand national champion and a Maxim winner, according to contest organizers.

Although cursive handwriting is not as widely seen or as prominent as decades past, it has made a comeback in some classrooms. After Common Core standards no longer required that cursive be taught in public elementary schools in 2010, some administrators — including in districts in Texas, Ohio and Illinois — reintroduced a cursive curriculum in elementary schools.

At Woodland Consolidated School, where fewer than 200 children attend, students begin learning how to write in cursive as early as the first grade, said Carrie St. Peter, Allison’s mother and a teacher at Woodland.

Sasha Morrissette, Christian’s mother, said that her son, who has autism, enjoyed creating character art, and that his artistic skills helped to improve his handwriting skills.

“He just has the ability to replicate things, like his memory is incredible, and I think that helps with this,” Ms. Morrissette said. “He was able to look at the example and just kind of picture it in his head, and he was able to transform it into a nice piece of writing.”

The national award for Christian could serve as an inspiration to parents who have children with autism, Ms. Morrissette said, adding that some have reached out to her since Christian won his award.

“It kind of gives them hope that our kids can be successful,” Ms. Morrissette said. “You don’t have to have a negative label. Autism doesn’t have to be negative.”

Alexandra Lord, Christian’s teacher for the past five years, said she had made it a rule not to allow technology in her classroom for several reasons, including to give students a break from screens and to practice their handwriting. 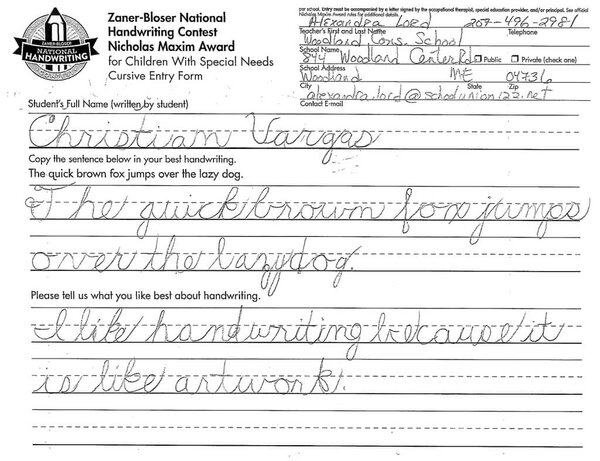 “Screen time isn’t always the most beneficial activity they can do,” Ms. Lord said. “They have to use a pen and paper, or pencil and paper, because I think that I’m trying to stress that we need to be connected to hand-eye coordination and fine-motor coordination.”

Efforts to keep cursive alive like those at Woodland Consolidated School should be commended, said Anne Trubek, the author of “The History and Uncertain Future of Handwriting.” Still, she still thinks its disappearance is inevitable.

“My take is that it’s going away,” Ms. Trubek said. “I think that there’s nothing wrong with learning cursive and doing it well. I don’t think it’s going to be much of a practical application.”

Similar to the end of a lowercase cursive Z, Ms. Trubek said, cursive’s fade will be gradual.

Cursive would linger like “the way there are still typewriters,” she said. “I think I’m just like most Americans where cursive is a much, much smaller part of their lives than it was 20 years ago — for those who are old enough to remember that — and it’s continuing, with each passing day, to become a smaller part of their daily lives.”

At Woodland Consolidated School, there has been a longstanding effort to maintain the craft.

“I feel that our students across our nation are losing the ability to sign their name,” Ms. Lord said. “I always tell my students: ‘You should be proud of your name. You should be able to write it as beautifully as you can because it represents your spirit, and you, and what you can accomplish.’”

To enter the Zaner-Bloser National Handwriting Contest, whose organizers say attracts about 80,000 participants every year, all students must write two sentences. One that says what they like about handwriting, and one that includes every letter of the alphabet: “The quick brown fox jumps over the lazy dog.”

The contest, which has run for 30 years, is organized by Zaner-Bloser, a company that produces educational materials and traces its roots to an Ohio college of penmanship founded in 1888. A panel of outside judges, including current and former educators, evaluates the submissions, and two occupational therapists select the Nicholas Maxim winners.

The winning students take home an engraved trophy, a $500 check and a $1,000 voucher for their schools. (Teachers get a certificate.)

Allison and Christian were not the first students from Woodland Consolidated School to be recognized for their cursive skills. In 2011, a seventh grader at the school won the national prize for his grade, according to The Bangor Daily News. And in 2017, another seventh grader was a semifinalist in the handwriting contest, according to The County, a hub for Maine news outlets.

“Everybody loves to teach the handwriting course,” Ms. St. Peter said. “It’s important that they can read historical documents that are in cursive, and they can sign their signature when they’re asked to sign forms.”

Ms. Lord said Christian initially didn’t want to participate in the contest, and at one point he crinkled up his paper and threw it away.

“He’s very self-directed, so I had to coerce him into trying to do it,” Ms. Lord said. “He did give me a very, very hard time.”

Nevertheless, she insisted that he try it again. She has taken immense pride in seeing him win the national award, she said.

“That’s the best part of this whole story is that anything is possible with the right support,” Ms. Lord said. “I think that is a great lesson for all of us, no matter what we’re trying to do.”