As promised, Trump slashes aid to Central America over migrants

Critics of the plan argue it is cruel to cut off aid to governments grappling with hunger and violence. 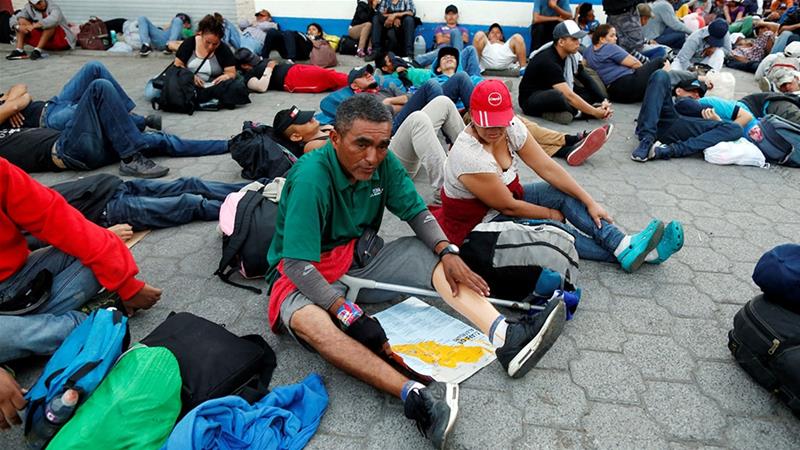 US President Donald Trump’s administration announced on Monday plans to permanently divert hundreds of millions of dollars in aid to El Salvador, Guatemala and Honduras, after Trump blasted the three countries because thousands of their citizens had sought asylum at the US border with Mexico.

All of the money for those years has not yet been spent.

The plan was likely to run into stiff opposition in Congress. Many politicians, including some of Trump’s fellow Republicans as well as Democrats, have chafed against the president’s repeated decisions to disregard spending bills passed by Congress, some of which he has signed into law himself.

The Trump administration said in March it would cut aid to El Salvador, Guatemala and Honduras after Trump expressed unhappiness with the three countries’ immigration policies.

Politicians who opposed the plan said it was cruel to cut off aid to countries grappling with hunger and crime, and the move would be counterproductive because it is more likely increase the number of migrants than decrease it.

No funds will be provided until the administration is satisfied the countries are reducing the number of migrants reaching the US border, said State Department spokeswoman Morgan Ortagus.

“This is consistent with the president’s direction and with the recognition that it is critical that there be sufficient political will in these countries to address the problem at its source,” she said.

Instead, Lopez Obrador said the government will run shelters and victim care directly.

“With the system of intermediation, most of the money stayed in the hands of intermediaries,” he said during his morning news conference. “Now, the government will do it directly.”

The move comes as Mexico steps up measures to stem the flow of mostly Central American migrants and asylum seekers to the US-Mexico border as part of a deal with the United States announced earlier this month. The deal came after President Trump threated escalating tariffs on Mexican goods if Mexico did not do more to address irregular immigration.

Many of those trekking north over the last year have told Al Jazeera they are fleeing violence, extreme poverty and unemployment.

Mexico is also continuing to roll out the deployment of some 6,000 National Guard members to the southern border.

Foreign Affairs Secretary Marcelo Ebrard said on Monday that the deployment would be completed this week.

Ebrard said the National Guard will be targeting human smugglers, adding that, during this past weekend, authorities stopped trucks carrying hundreds of migrants and asylum seekers.

Each of the migrants was paying $3,500 to be smuggled to the US and some paid $5,000 to be entitled to a second attempt if caught, Ebrard said.

He estimated the entire value of the truck caravan’s human cargo at more than $3.5m (69 million pesos) and said the smugglers were going to pay roughly $500,000 to $800,000 in “commissions” to ensure the migrants’ free passage.

Bribes are traditionally paid along the route to authorities, but also to organised crime groups that control territory, especially at Mexico’s northern border with the US and charge smugglers for each migrant they cross.

Ebrard said Mexico was meeting weekly with governments from Central America’s Northern Triangle – Guatemala, Honduras, El Salvador – to exchange information about smuggling rings. But he said he also expected cooperation from the US government.

“The United States has to assume its responsibility in this, too,” he said. “The key part is who do they pay there (in the US)? And the question is these trailers get to the border and what happens?”