ASHLAND, Ore. — Francisco Javier Torres came to Oregon’s Rogue Valley to plant trees and fight wildfires. When his children were young, he began restoring old mobile homes and renting them to the seasonal workers who pick pears, grapes and hemp. In the mobile home community of Coleman Creek Estates, just north of Ashland in the town of Phoenix, there were 14 trailers that Mr. Torres had rescued from the scrap heap and transformed into a rare type of affordable housing for immigrants.

The Almeda Fire razed them all when it burned through the valley this month. It also claimed Mr. Torres’s house, a two-bedroom, two-bath trailer that he had recently adorned with new floors. He lost the counters he had bought to install in the kitchen, a collection of tools and ladders and chain saws, his new truck, pictures of his children and keepsakes he had carried over the border from Mexico 30 years ago. But his great concern is for his neighbors.

“My entire life’s work all gone, ash,” Mr. Torres, 54, said. “My business was doing good. I always have more people calling me who want to rent a place than I have to offer. Now I’m just worried about what will happen with the 14 residents who stayed at Coleman Creek. I have nothing to offer them right now.”

The fire in early September ripped through two bedroom communities of the valley, Phoenix and Talent, a short drive north on Interstate 5 from the California border, part of a series of fires that have ravaged California and the Pacific Northwest since mid-August. Two large new fires were burning in Northern California this week, killing at least three people and forcing thousands of people to evacuate.

The Southern Oregon fire, one of the worst in a devastating fire season, destroyed more than 2,000 homes, including large tracts of the mobile home parks and apartment buildings that sheltered and sustained a large community of immigrant farmworkers, house cleaners, carpenters and cooks who had slowly been building stable new lives for themselves and their children.

For them and others, it destroyed much of the affordable housing stock in a region where vacancy rates were already low and rent was a heavy strain on workers’ incomes. In the school district that serves Phoenix and Talent, nearly half the students have lost their homes. 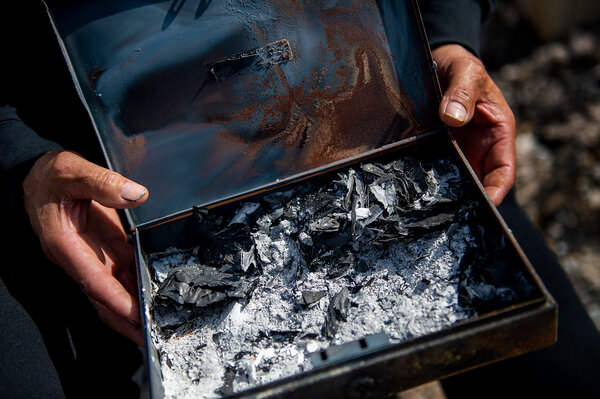 Many immigrant workers had already been hurt by the coronavirus pandemic and the ensuing recession this year. In the spring, some large employers closed down, at least temporarily, sometimes without advance notice to their workers. Some who lost paychecks did not qualify for emergency federal stimulus measures because they or their spouse are not legal residents of the United States. When the fires hit, some families did not just lose their homes — they also lost their life savings, often kept at home in cash by people who do not trust banks.

Oregon’s immigrant population has also contracted an outsize number of infections from the virus, a specter that hangs over the recovery efforts here.

“Covid hit the valley hard,” said Erica Alexia, the 28-year-old daughter of Mexican immigrants in Phoenix, who has several uncles and an aunt whose homes burned down but whose family has had trouble pulling together in all the normal ways because of the pandemic. “It’s hard because people want to be together, to comfort, to mourn, to heal.”

In a larger sense, though, the fire has revealed the closeness of the tightly knit community, to a degree that many of them say they have never seen. Immigrants and native-born residents alike whose homes were spared by the flames have opened their couches and floors to displaced families. Donations of clothing, food and other essentials have poured into relief centers. A largely white group of restaurateurs have begun an ambitious effort to feed fire victims daily meals for months to come.

“You just really see your community light up for you,” said Estefania Ortiz, 17, a high school senior who is Ms. Alexia’s cousin. “I keep telling my teachers — it’s a small community with a big heart.”

Migrant workers have traveled to the Rogue Valley for decades, to power the agriculture and forestry industries here, starting with the Bracero program of the 1940s, which provided Mexican workers for American farms. Some workers began settling in the region permanently in the 1970s, and others have followed. Today, about 14 percent of Jackson County — which includes Ashland, Phoenix and Talent — is Hispanic, according to census figures. Nearly one in 10 residents of Phoenix was born outside the United States.

The immigrants here today work in pear orchards, vineyards, restaurants, cleaning services and at major regional employers like Harry & David, a retailer famed for its fruit baskets. They work hard: Many returned to their jobs almost immediately after the fires — for some, it was the following day — even after losing their houses and their possessions.

Children of immigrants here say their parents have stressed education, particularly college, as a path to a better life. The high school that serves Phoenix and Talent made a successful push in recent years to boost graduation rates, said Cesar Flores, a former counselor at the school who is the son of immigrants from Mexico.

Ms. Ortiz has returned to her virtual classes for her senior year at Phoenix High School, but the fires have complicated her studies. Her family lost its home. So did her great-grandmother and an aunt and an uncle. Her father has returned to work at Harry & David, and Ms. Ortiz and her family are staying in a newly constructed home owned by a woman who used to employ her father. It is not quite completed, and it lacks internet access, so Ms. Ortiz must use her phone to connect to classes, sometimes walking downhill to her aunt’s R.V. to get better reception.

In the fires, she lost her quinceañera dress, childhood pictures and nearly all of her clothes. “It definitely has been stressful, and it has been sad,” Ms. Ortiz said. “I didn’t just lose my house. The town that I grew up in, the only town I’ve known — to see it in ashes is just heartbreaking. It was my home. I felt safe there. I belonged there.”

Now, she said, her family may have to move elsewhere in the valley. “There are no homes in Phoenix or Talent, so there’s no going back.”

Residents have expressed concern that the valley, which has endured a housing supply crunch for years, might neglect affordable housing in its rebuilding efforts — replacing mobile homes with high-end subdivisions.

A more immediate worry is food. Mr. Flores, who is now working as a high school counselor in nearby Medford, starts every conversation — with fire victims and community volunteers alike — with the same question: When was the last time you ate? A group of restaurant owners and other food service professionals in wealthy Ashland is trying to organize an $8 million relief effort to feed about 2,000 fire refugees three meals a day for several months.

“We’re going to need to meet people’s immediate and long-term food needs with the kind of food that heals and revitalizes a community,” said Adam Danforth, a butcher and author who moved to Ashland from Brooklyn several years ago, and who is helping to lead the effort.

Hundreds of displaced residents have started GoFundMe efforts to pay their bills. Ms. Alexia and her friend Niria Alicia, Mr. Torres’s daughter, have organized a wide-ranging fund-raising drive to help families survive while they return to work and search for new homes. As of Tuesday, it had raised about $69,000, far exceeding their initial goal.

“A lot of things burned down,” Ms. Alicia said. “But who gets to recover and who doesn’t? That’s the question.”

Mr. Torres will need time to rebuild his mobile-home refurbishing business, which was finally surging before the fires because he had paid off the debt he had incurred. In an email interview translated by his daughter, he said he had already returned to working on the few homes he owns that did not burn, after buying some new tools.

“I’m building a little room adjacent to one of them,” he said, “so I can sleep in it at least.”

Mr. Flores said many of his students had been struggling with sleep even before the fires, in a year of fear and disruption. One of them, he said, had called him this year and asked, “Do you think the world is ending, Mr. Flores?”

He said he had been awed by the work of the relief organizations in his community after the fires. He fought back tears while describing his good fortune in not losing his house, and the need that he and others feel to help those who lost theirs. He also recalled what he told that insomniac student early on in the pandemic.

US election 2020: Final debate is focused, respectful, but unlikely to change anyone’s mind

Donald Trump Defends Putting Children In Cages At Border: ‘They Are So Well Taken Care Of’