Home » Americas » Americans Cast Their Ballots. The World Had Questions.

Americans Cast Their Ballots. The World Had Questions.

Now that the midterm elections in the United States are history, Sarah Lyall has written the final installment of Abroad in America, a weekly look at American politics for non-Americans. You may remember Sarah’s often witty and insightful work as a correspondent for The Times in Britain. These days she’s a writer at large, based in New York. 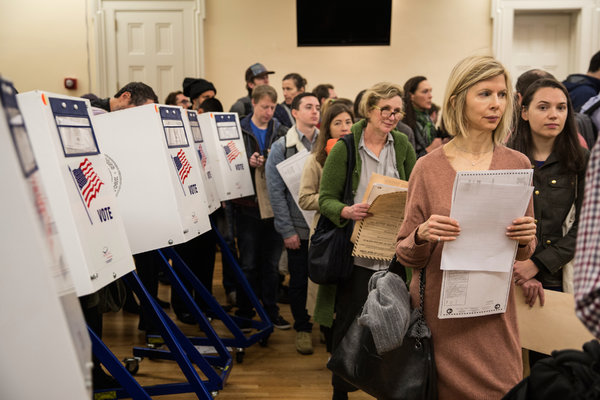 [Read: Abroad in America: A Mixed-Results Election That Left Everyone Happy — Because It’s Over]

Writing the weekly dispatches, Sarah told me, was a learning experience for her, as she’s never been a political reporter. We spoke this week about her campaign experiences and what she learned from Abroad in America subscribers, including readers in Canada. Our interview was edited for clarity and space.

What surprised you about the election?

Well it wasn’t surprising so much as really, deeply dispiriting, how divided people are, and how heated the rhetoric is. People were awful, the rhetoric was awful at times. And it was hard to actually see it in person.

I have always hoped that if you’re sort of a vaguely nice person, you can have legitimate conversations with people who disagree with you. And in many cases in this country, that doesn’t seem to be happening.

Many people outside the United States have a sense that democracy is broken there. Are they right?

You can look at it very roughly in the United States as, the people in power think things are going fine, and the people not in power are deeply alarmed at what appear to be threats to our basic values as Americans.

I would say, though, that you know, none of the institutions that make up this country have fallen. No one has seized power in a military coup. Things seem to be happening that are very alarming but the system, so far, still stands.

Republicans who are running the White House would say, and do say, that the issue people have isn’t so much that democracy is failing, but that they are angry that democracy has worked out in a way that they’re not happy with.

But a lot of people’s issues are questions of values: civility, discourse, rule of law. All those sorts of things that we care so much about seem to be severely tested by the rhetoric and behavior of the White House.

[Want the Canada Letter in your inbox every week? Subscribe here.]

Was there any pattern to the questions non-American readers sent you?

The questions ranged from very basic philosophical questions to “What the hell is going on over there?” to wonderfully specific ones.

People from abroad look at our system and they believe that we’re in a permanent state of campaigning, which was vaguely true.

There are all sorts of mechanisms that people don’t understand, and there’s no reason they really should. Some readers didn’t even know what the word gubernatorial means. [It describes governor races.]

What experience from the midterms will you remember five years from now?

I went to a Trump rally, and that was a pretty vivid experience. There were maybe eight or nine thousand people in this big arena in Erie, Pennsylvania. And the press was penned into this thing in the middle, which is normal at these rallies.

The whole thing was weird. People weren’t in any way mean, except when they were jeering and shouting as if we were people in a cage. But afterward, everybody was super nice.

Some of the nice ladies I talked to felt sorry for me because I work for a place that was so full of lies and fake news. And every time I tried to say, well, we actually work really hard, and we try really hard, they just looked sad.

And some final news on the midterms: Earlier this week I looked into the trade implications for Canada of the Democrats again controlling the House of Representatives.

A reminder that we’re holding our first Times subscriber event in Vancouver on Nov. 15. Dan Bilefsky, my colleague in Montreal, will be joined by Thomas Fuller, The Times’s San Francisco bureau chief, along with guests from within the industry to discuss the effects of marijuana legalization on Canada’s economy and culture. Canada Letter readers can use the promo code CANADALETTER to get a $5 ticket discount. Get your tickets and find out all the details here.

Earlier this week Susanne Craig, a proud daughter of Calgary, was in Toronto at a Canadian Journalism Foundation event to discuss her investigation that showed President Trump owes his wealth to his father, as well as his family’s dubious tax avoidance measures. You can watch a video of the conversation here.

Our colleagues in the Opinion section have produced a video laying out the history of the creation of fake news or, as the K.G.B. used to call it, “active measures.” Aside from looking into the past actions of American and Soviet spy agencies, the documentary also examines current disinformation and how governments should respond to it in the future. If your television service includes B.B.C. World News, you’ll be able to watch “Operation Infektion” this weekend. This page offers showtimes by country and region.

—Dan Bilefsky met up with Ross Rebagliati for an engaging profile of the former gold medalist turned pot entrepreneur: “His gold front tooth, adorned with half a cannabis leaf, glinted as he smiled, momentarily giving him the air of a comic book villain. But Mr. Rebagliati, a soft-spoken former Canadian Olympian, appears far too gentle — and too stoned — to do harm in the world.”

—The 900 passengers of the steamship St. Louis were mostly Jews fleeing Nazi Germany. And more than 250 of them were ultimately killed after being turned away by Canada and other countries. Prime Minister Justin Trudeau has apologized for the dark moment in Canada’s past.

—Shaun Pett reviewed Quetzal, a new fine-dining Mexican restaurant in Toronto’s Little Italy neighborhood, and found that its chefs “are careful of the authenticity trap.”

—Tony Clement, the former Conservative cabinet minister and current member of Parliament, used social media to build his political profile. Now it’s the cause of his political downfall.

A native of Windsor, Ontario, Ian Austen was educated in Toronto, lives in Ottawa and has reported about Canada for The New York Times for the past 15 years. Follow him on Twitter at @ianrausten.

We’d love your feedback on this newsletter. Please email your thoughts and suggestions to [email protected] And if you haven’t done so, please subscribe to the email newsletter version.