PARADISE, Calif. — It is a measure of how frequent and deadly wildfires have become in California that identifying badly burned remains has become an area of expertise. Once again cadaver dogs have been summoned, forensic dental experts will follow and coroners and anthropologists are using their experience from previous wildfires to locate the victims.

One search team on Tuesday toured the foundation of a flattened home in this singed stretch of Paradise, Calif. Carefully they circled the charred bathtub, the melted kitchen floor, the skeletal playground — poking everywhere with long metal poles.

In white hazmat suits and red hard hats, the group of specialists was searching for two things no one wants to find: bodies and bones.

“Checked the bathroom,” Tess Koleczek said. “That’s where I would probably go, to the bathroom, with the water running as long as I could.”

Scanning the sunken ground, she poked at the debris. “The problem is,” she said, “how do you tell a bone from a rock at a certain point?”

At least 42 people were killed in the Camp Fire, the deadliest wildfire in California history, and many more are missing.

“We don’t want to be good at this, but it’s an unfortunate reality of what has gone on in Northern California,” said Sgt. Ray Kelly, a spokesman for the Alameda County Sheriff’s Office, which has a search team working in Paradise.

Authorities warned it could be a long process.

“We’ve done this before,” said Jason Finney, 42, a captain with the Butte County Fire Department, after he pulled onto one fire-ravaged street on Tuesday. The difference this time, he said, was the scale. “But not with this many people, in this large an area, with so many structures and so many vehicles.”

Under mandatory evacuation since the fire, Paradise is now emptied of its residents. Emergency vehicles and trucks from the electric utility drove through the smokey haze still hanging over the town. Black hearses traveled to and from the main hospital, their hazard lights flashing. It’s just one of the places where two major fires have ravaged entire communities up and down the state.

The Camp Fire, which still burns in the hills and gullies around Paradise, is only 30 percent contained. In Southern California, firefighters continued to battle the Woolsey Fire, which is threatening 57,000 buildings west of Los Angeles and has already destroyed hundreds of houses in Malibu and surrounding areas. Tens of thousands of residents have evacuated their homes. 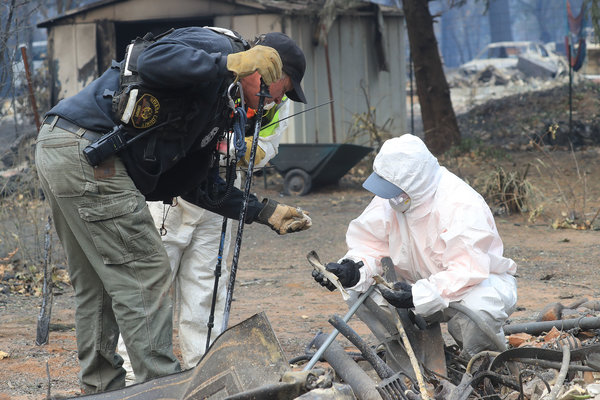 Experts fear that many of the remains they are seeking will be burned beyond recognition and perhaps beyond identification, known in the jargon of specialists as cremains.

Drawing on their experience during the deadly wildfires last year in the wine country of Sonoma, Napa and Mendocino Counties, search teams will be using cadaver dogs.

“There’s really no technology that is available other than the dog’s nose to identify areas where these remains might be,” Sergeant Kelly said.

In many of the destroyed homes in Paradise the chimney is the only structure left standing. With or without dogs, finding remains is a low-tech process, experts say.

“As advanced as we are, we are literally down to buckets and shovels,” Sergeant Kelly said.

Around 15 search-and-rescue teams met in the parking lot of the local bowling alley Tuesday morning to begin their grim task, fanning out across the region, said Sgt. Steve Collins of the Butte County Sheriff’s Department.

The search teams include many volunteers and each team was assigned an anthropologist with the expertise to distinguish human from animal remains.

Teams were also accompanied by Cal Fire firefighters who were called on to help with specific tasks: removing heavy debris, entering particularly dangerous areas, or using thermal imaging technology to determine if a home was still too hot to enter.

Among the specialists called on to assist in the identification of victims is Jim Wood, an expert in forensic odontology, the use of dental records to match teeth found in the ashes.

Mr. Wood, who is also a representative in the California State Assembly, says dental records were crucial in identifying the victims of the wine country fires last year. Officials are checking dental clinics in Paradise, he said, to see how many records survived the fires.

“The trick is getting the records,” he said.

“In some of the identifications last year I only had two or three teeth,” Mr. Wood said. “They are extremely fragile and that becomes another part of the challenge.”

DNA may also play an important role, he said. The Butte County sheriff, Kory L. Honea, announced at the beginning of the week that the county had requested advanced DNA machinery to help identify remains.

“The technology for DNA has really come a long way,” Mr. Wood said. “We are able to get DNA profiles from remains that five years ago we couldn’t.”

Once a body was identified, the search team calls a coroner’s team. On Tuesday, the county was working with 13 teams from around the region. Those teams remove the bodies, which are sent to Sacramento County, where experts will try to identify them.

On Tuesday, Ms. Koleczek and other members of the team, called A-4, continued to make their way through a home left with little but a hollowed-out trampoline.

Across the street, a sign was tacked to a tree. “Slow down!” it read.

Team A-4, like others across the region, wore white booties over their boots and white masks over their faces, trying to keep the ash from their nostrils and lungs.

Search teams are also warned to be aware of septic tanks. Earlier this week the earth gave way under a search worker, his leg falling through the septic lid.

John Sutter, the group’s leader, had told the team to pay attention to anything that looked like a pot. An apparent pot he said, was sometimes a skull.

Ms. Koleczek pulled a twisted object from the earth. Bone? She wondered. Mr. Sutter came over.

Many of those combing for remains were retired search-and-rescue workers — about the same age as the missing people they sought. At 3 p.m. Ken Sanders, 75, had just finished combing ten homes in Ridgewood Mobile Home Park, a retirement community on the east side of Paradise.

He stood outside his van in his white safety suit, rested his search pole against the vehicle, and said he was a volunteer from Calaveras County.

“The motto of search and rescue is: That others may live,” he said.

“We serve so that others may live,” he went on. “Families need closure.”

As the U.S. votes, a frazzled world holds its breath.