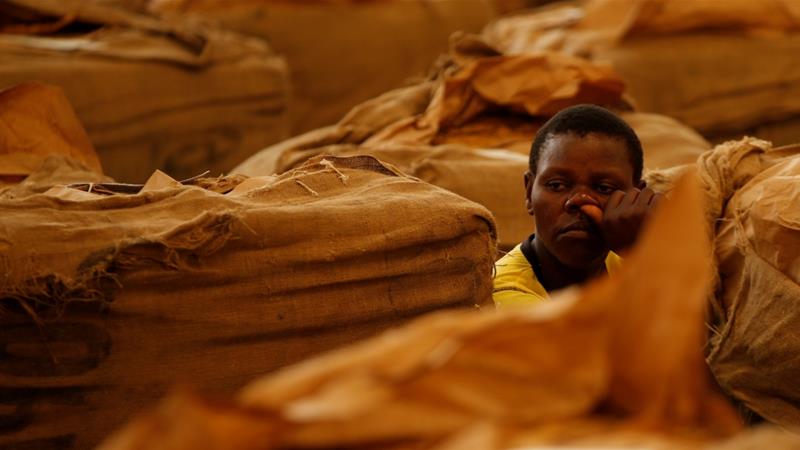 Malpractice in Zimbabwe’s tobacco growing industry is rampant, an international human rights organisation has reported after an investigation.

In a report launched in the Zimbabwean capital, Harare, on Thursday, Human Rights Watch said cases of child labour, worker exploitation and low pay are rife on the farms around the Southern African country.

The report, titled A Bitter Harvest: Child Labour and Human Rights Abuses on Tobacco Farms in Zimbabwe, documents how children work in hazardous conditions, performing tasks that threaten their health and safety or interfere with their education.

“Companies sourcing tobacco from Zimbabwe should ensure that they are not buying a crop produced by child workers sacrificing their health and education.”

At one of the biggest auction floors on the outskirts of Harare, Al Jazeera witnessed how teenage boys and girls were accompanying their parents, having to sleep at the floor premises after travelling overnight to sell their tobacco.

Because they cannot afford to outsource labour, many rural families depend on the produce of tobacco, including underage children, who are forced to miss school or drop out altogether.

Child labour and other human rights abuses on tobacco farms in Zimbabwe are likely to tarnish the $900m tobacco industry’s contributions to the country’s economic growth and improved livelihoods.

Human Rights Watch conducted research in the four provinces responsible for nearly all of Zimbabwe’s tobacco production. The report is based on interviews with 125 small-scale tobacco farmers and hired workers, including children or former child workers, in late 2016 and early 2017.

The rights group discovered that the government and companies have generally not provided workers with enough information, training, and equipment to protect themselves from nicotine poisoning and pesticide exposure.

Human Rights Watch found similar conditions on tobacco farms in research in other countries, including the United States. But where governments have enacted strong laws against child labour, and provided extensive information on how to provide protection, such as in Brazil, there has been some progress in keeping children out of the fields and protecting workers.

Some of the world’s largest multinational tobacco purchase tobacco grown in Zimbabwe, either directly or at auction, including British American Tobacco, Japan Tobacco Group, and Imperial Brands.

Under human rights norms, companies buying tobacco from Zimbabwe have a responsibility to ensure that their business operations do not contribute to child labour and other human rights abuses.

“Most of the multinational companies involved have policies prohibiting their suppliers from using child labour and engaging in other human rights abuses, but Human Rights Watch’s findings suggest there are serious gaps in carrying out and monitoring these policies in Zimbabwe.

“Tobacco companies should explicitly prohibit direct contact by children with tobacco in any form, conduct regular and rigorous human rights monitoring in the supply chain, and report transparently on their findings,” Human Rights Watch said.

One of the most serious health risks in tobacco farming is acute nicotine poisoning, or Green Tobacco Sickness, caused by absorbing nicotine through the skin from tobacco plants.

The 14 child workers interviewed, and most of the adults, said they had experienced at least one symptom consistent with acute nicotine poisoning; nausea, vomiting, headaches, or dizziness while handling tobacco.

Zimbabwe is the world’s sixth-largest tobacco producer. The crop earns the country hundreds of millions in foreign currencies.

Dewa Mavhinga, a Zimbabwean citizen who is Human Rights Watch’s Southern Africa director, told Al Jazeera on Thursday that his organisation has met with the country’s justice minister to present the plight of the workers.

“He expressed deep concern,” Mavhinga said. “It’s something government says it will definitely look into.”

Government officials were not able to comment, saying they needed to look at the report first.

But Isheanesu Moyo, a spokesman for the Tobacco Industry and Marketing Board in Zimbabwe, said the regulatory board was “deeply disturbed” about the revelations contained in the report, although he questioned the gravity of the malpractice.

“We are concerned of course,” Moyo told Al Jazeera. “We are deeply disturbed with the reports of rampant abuses on the farms, and child labour. The only issue we have with the report is that of 125 000 tobacco growers in the country, only 125 cases were studied, so it (HRW report) might not be a national reflection of what really is transpiring across the country.

“But all the same, the issues raised a very pertinent. No child should be subjected to child labour or any abuse of any kind. We will definitely give it an ear and try to see to it that no such cases happen in our tobacco fields.”

Lesotho PM to be charged with murdering his wife