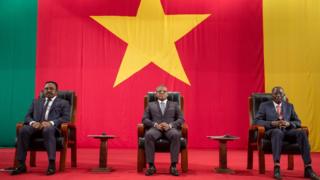 Life in Cameroon’s two English-speaking provinces has been been brought to a standstill by three years of conflict, which has cost about 3,000 lives and forced 500,000 from their homes.

The dispute had been simmering for decades, but boiled over in 2016, when teachers and lawyers started to protest against the use of French in schools and courts.

The government in the majority French-speaking country responded with lethal force, provoking rebels to declare independence for the region they call “Ambazonia”, which in turn led to an even stronger military crackdown.

In an attempt to end the crisis, President Paul Biya called for talks, dubbed the National Dialogue, this week.

Some were encouraged by this, but others dismissed it as a sham. So what has it achieved?

The National Dialogue made a series of proposals:

Why do these proposals matter?

A return to the name United Republic of Cameroon is significant as it would go some way towards recognising the different histories of the different parts of the country.

At independence, the Southern Cameroons (colonised by Britain) voted in a UN-organised plebiscite to be united with the Republic of Cameroon (formerly colonised by France).

“It is the abolition of this federal structure that lies at the core of the Anglophone problem,” opposition leader John Fru Ndi told the BBC.

In 1984, President Paul Biya worsened the situation by scrapping the word “united” from the name of the country, and it became known simply as the Republic of Cameroon, which was the same name given at independence to the part of Cameroon colonised by France.

“What that meant was that the Anglophone entity had been annexed,” Mr Fru Ndi said.

What difference would they make?

A return to the United Republic of Cameroon has been welcomed, although Mr Fru Ndi would have preferred a return to a federal system of government.

The prospect of electing local governors has also been welcomed by many. Jean Emmanuel Pondi, a professor of political science, told the BBC that “for Anglophones, it is a return to normalcy”.

He said that locally elected officials would mean decisions being taken closer to the people.

“It used to be an administration of proximity where things are done by the people, for the people, and in the right moment,” Prof Pondi said.

“The problem with the centralisation of power is precisely that things are done miles and miles away, by people who have no idea of the consequences of the decisions they are taking.”

He said giving more autonomy to the regions would also “accelerate their dimension of good governance, because you have to be accountable immediately, or else, you are not elected”.

The proposals will be forwarded to President Biya, with the expectation that he will order them to be implemented.

What has the reaction been?

Opinion has been sharply divided.

Backers like Elvis Ngolle Ngolle, a senior figure with the ruling party, thinks that it is a “decisive step in the right direction”.

“It will enhance participatory development across the country,” he told the BBC.

“We believe that these proposals will calm down minds and restore peace.”

But Akere Muna, a political leader and former Cameroon representative of Transparency International, walked out of the talks in protest over what he said were attempts to stifle debate.

“Speakers were pre-arranged. You couldn’t even ask a question. It was stage-managed. So they were actually looking for spectators, not participants,” Mr Muna told the BBC.

Noting that the debate in the two English-speaking regions was about “secession and separation,” he questioned why there was no commission to examine those alternatives.

“So, I thought that the prescription had nothing to do with the illness,” he said.

On Thursday, in what appeared ot be a goodwill gesture President Biya ordered all charges dropped against more than 300 people detained in connection with the Anglophone crisis.

But the decision failed to appease critics who say thousands more are locked up on trumped-up charges.

What do the separatists say?

They have pledged to keep fighting until “Ambazonia is freed”.

Ivo Tapang, a spokesman for 13 armed groups called the Contender Forces of Ambazonia, has made it clear that the concessions made so far are not enough to deter them from their fight for freedom.

“We will not accept an olive branch from someone whose troops are still in our territory,” he said. “We will intensify our struggle with guns and bullets.”