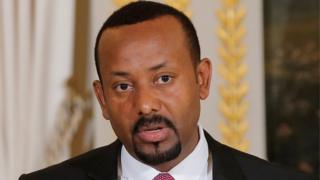 Ethiopia’s former deputy intelligence chief has been arrested amid investigations into corruption and human rights abuses committed by the security forces.

Yared Zerihun, the former deputy head of the national security agency, is one of more than 60 intelligence and military figures arrested since Monday.

Mr Yared has not yet commented on the allegations.

The move has been widely welcomed by human rights groups.

Ethiopia’s Prime Minister Abiy Ahmed promised a strong line on corruption and human rights abuses when he came to power in April this year and has passed a string of reforms, including ending a two-decade conflict with neighbouring Eritrea.

Why has he been arrested?

It is not clear and he has not yet been charged.

However, attorney general Berhanu Tsegaye has accused “the senior leadership of the national security agency” of involvement in a grenade attack at a rally attended by the prime minister in June, in which two people were killed.

However, he declined to name a suspect.

Who else has been arrested?

So far this week, 27 people have been detained over alleged crimes committed at the Metals and Engineering Corporation (Metec), Ethiopia’s military-run conglomerate – including its former head, who was arrested as he tried to flee the country.

According to state-affiliated television Fana Broadcasting, police have also arrested the head of the security division at state-owned Ethio Telecom network.

On Monday, the attorney general announced that a five-month investigation into Metec had uncovered vast corruption.

Ethiopian state media then broadcast a documentary alleging that the conglomerate had been involved in illegal arms smuggling, including to Somalia.

In August, Metec’s contract to build a major new dam on the River Nile was revoked and handed to foreign companies.

Last month, a group of several hundred soldiers, some armed, went to see the prime minister – reportedly to demand a pay rise.

The situation was defused, with pictures released showing him doing press ups with some of them.

However, he later suggested that some had been trying to kill him.

Ethiopia watches in disbelief – and cheers

A year ago, many Ethiopians would not have dared to imagine the spectacle they are being treated to right now, as the government intensifies the crackdown on corrupt officials and people it alleges have carried out gross human rights violations.

The country has watched in disbelief – and then cheered as former high-ranking and powerful military and intelligence officials have been arrested on live television, handcuffed while surrounded by heavily armed security personnel and bundled into police vehicles. Times have indeed changed.

The corruption scandals now facing the Metals and Engineering Company have not been a secret in the country – they have been whispered in homes, pubs and coffee places.

Other officials have already appeared in court facing charges that include the torture, rape and sodomy of arrested individuals. These are again claims very familiar to thousands of Ethiopians, who over the years have been arbitrarily arrested and detained.

Since coming into office in April, Prime Minister Abiy has endeared himself to the public, but by taking on the powerful military elite this week he has won over even some of his doubters who thought he didn’t have it in him.