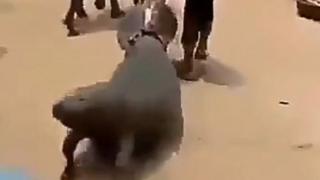 Nigeria’s environment ministry has launched an investigation after a video emerged of an endangered manatee, also known as a sea cow, being dragged along a dusty road by a group of young men.

It is not clear when the footage was filmed.

The animal has been tied in ropes and can be seen trying to get away.

Ms Ikeazor said the incident took place in the oil-rich Niger Delta region, and called for an awareness campaign “to educate our people to protect the manatee”.

My attention has been drawn to a very distressing & distasteful video of a captured manatee in the Niger Delta Region being dragged on bare ground to a cruel fate by some ill informed/uninformed youth. I strongly condemn this act …. pic.twitter.com/08yPCUf35o

Manatees are large marine mammals which are mostly herbivorous.

It is illegal to hunt them in Nigeria, but they are still killed for their meat, oil, and organs which are used in traditional medicine, AFP news agency reports.

Many people in the Niger Delta are poor, despite the region’s oil wealth.

Pressure group the Blue Planet Society, which campaigns to preserve ocean life, said it was shocking that a “supposedly protected West African manatee can be abused in such a public way”.

There are about 10,000 manatees along the coast of West Africa, AFP reports, but their numbers are in steep decline.