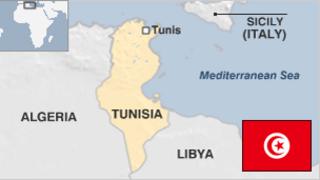 Home of the ancient city of Carthage, Tunisia was once an important player in the Mediterranean, thanks to its location in the centre of North Africa, close to vital shipping routes.

The Romans, Arabs, Ottoman Turks and French realised its strategic significance, making it a hub for control over the region.

French colonial rule ended in 1956, and Tunisia was led for three decades by Habib Bourguiba, who advanced secular ideas, foremost of which was the emancipation of women.

Tunisia is more prosperous than its neighbours. Agriculture employs a large part of the workforce and tourism is a key sector.

Mass protests unseated President Ben Ali in 2011 – the first of a series of popular uprisings to sweep the region.

The country’s transition has been relatively peaceful, but secular Tunisians, especially women, are worried about the growing influence of ultra-conservative Islamists. And there is a mounting challenge posed by Islamist militants who claimed responsibility for attacks in 2015 in which 60 people were killed, most of them foreigners.

He was a long-serving speaker of parliament under Mr Ben Ali’s rule, and critics believe his rise to power marks the return of the ousted political establishment.

He has warned of tough economic reforms, including a possible programme of austerity, to satisfy international lenders and boost economic growth and boost job creation.

But as the former French colony’s youngest ever prime minister, many of Mr Chahed’s critics have questioned whether he has the political clout to overcome the trade union opposition, strikes and party infighting that have dogged past governments.

The Tunisian media now enjoy greater freedom than before the 2011 popular revolt.

Social media played a key role in the uprising.

Some key dates in Tunisia’s history:

Circa 1100 BC – Phoenicians settle the north African coast. The city of Carthage, near the site of present-day Tunis, becomes a naval power.

909 – Berbers wrest the region from the Arabs.

1600s – Tunisia becomes part of the Turkish Ottoman empire, but has a high degree of autonomy.