Home » Africa » Trekking 10,000km across Africa for a football match

Trekking 10,000km across Africa for a football match 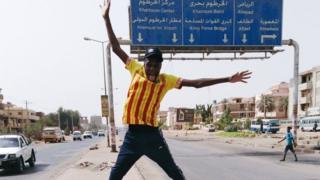 A Zimbabwean nurse travelled from Cape Town to Cairo by road enduring visa delays, internet blackouts and revolutionary protests all for the love of football.

Alvin “Aluvah” Zhakata had intended to make it to Egypt for the opening match of the Africa Cup of Nations on 21 June, when Zimbabwe’s Warriors took on the hosts.

But he missed the match because his epic journey took much longer than expected.

Yet thanks to those following his adventures on Twitter, he has now become a celebrity – and the African football boss has presented him with a ticket to this Friday’s final between Algeria and Senegal.

‘Africa is not friendly to Africans’

When the 32-year-old arrived in the Egyptian capital last week, completing his 44-day 10,000km (6,200-mile) trip, he said it was well worth it despite some nerve-wracking experiences.

And he says he has learnt a lot about himself and Africa.

“I used to think I was not patient – but my patience was stretched to the maximum – I’ve got a bigger patience threshold than I thought,” he told the BBC.

His other more sobering discovery was that “Africa is not friendly to Africans” – in terms of visas and borders.

Most people visiting from Europe or the US were treated better, he said. 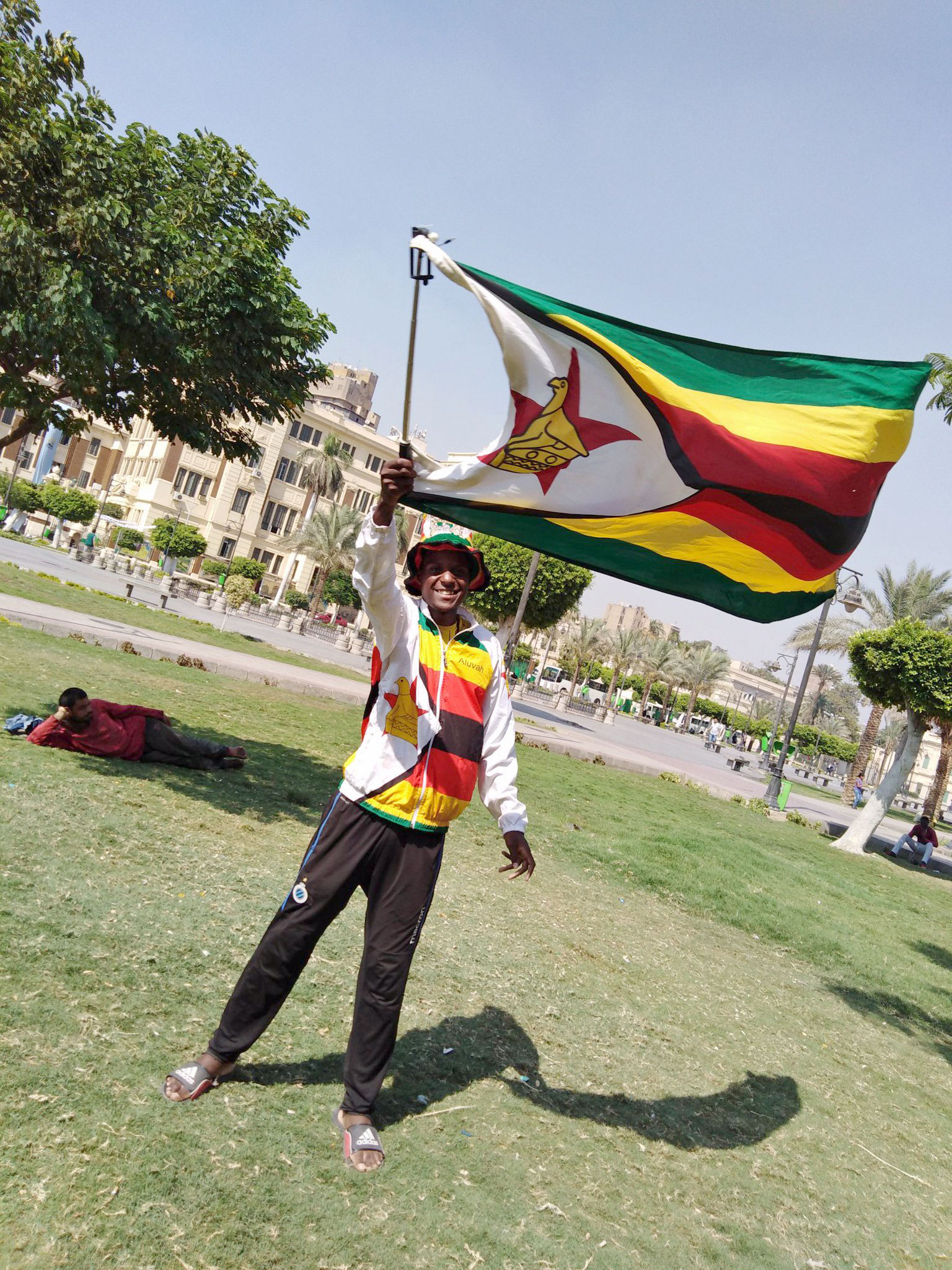 “And some of the visa fees for African countries, they are actually more expensive than visa fees when you want to go to Europe – and the waiting period takes too long.

“I believe we need a borderless Africa.”

The journey began on 27 May on a route passing through South Africa, Zimbabwe, Zambia, Tanzania, Kenya, Ethiopia, Sudan and Egypt.

‘We wanted to make history’

He started off with his friend Botha Msila, a South African football fan, who lives near Cape Town, and they hitched lifts or caught buses.

“We wanted to make history as the first people to make it from Cape to Cairo by road for a sports tournament,” Zhakata said. 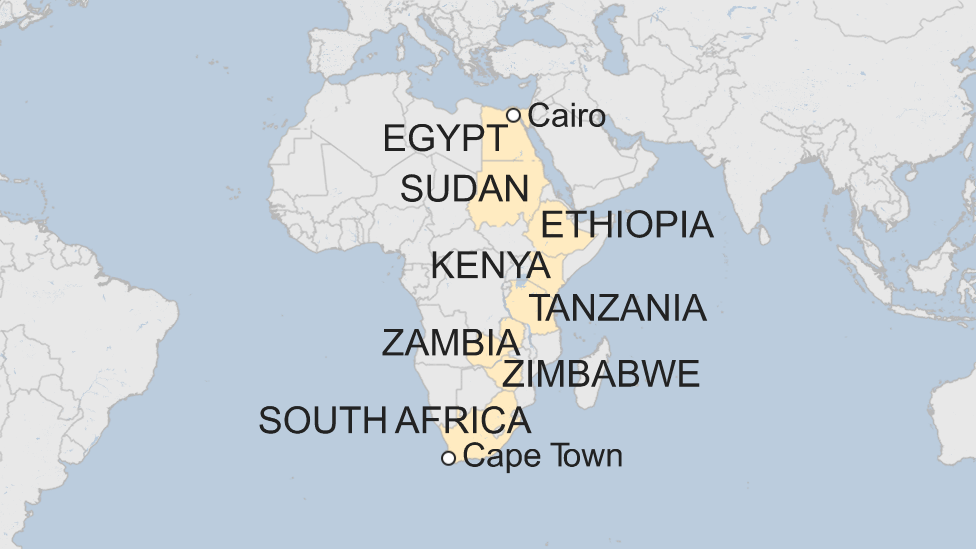 The locum nurse, who lives in Zimbabwe’s capital, Harare, had kept in touch with Msila since meeting him at the Cosafa Cup final in South Africa’s Sun City two years ago.

He had told him about how he had made a solo road trip in 2016 from Harare to Kigali to support the Warriors at the African Nations Championship in Rwanda.

They then cooked up their plan and raised funds for the journey from well-wishers following the hashtag #CapeToCairo to see their progress across the continent.

But the two friends were separated when Msila turned back at the Kenya-Ethiopian border as he could not get a visa.

Ethiopia only allows online visa applications for travellers by road.

While they had the fee in cash, they needed help to get the funds electronically into their account. But then their application was further delayed by five days.

“Unfortunately their system was down because there was a national internet shutdown to avoid exam cheating,” explained Zhakata.

“I was so dejected that I couldn’t finish my food and my beer.” 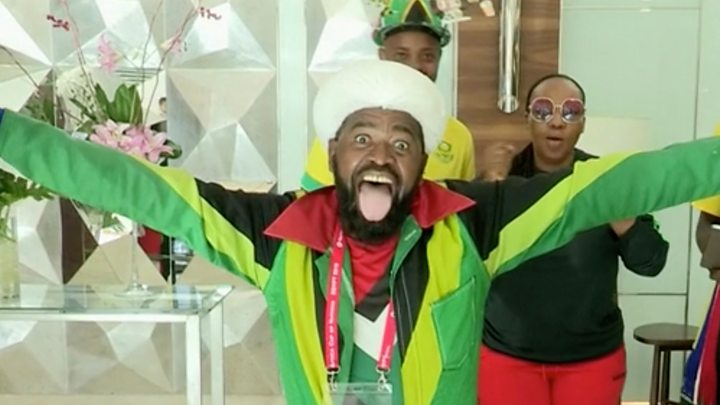 Msila, known for his travels across South Africa and beyond to support the Bafana Bafana and his local club Bloemfontein Celtic, was so distraught he threw in the towel, returning to Kenya’s capital, Nairobi.

A South African broadcaster came to his rescue paying for a flight for him from Nairobi to Cairo.

But Zhakata was determined to stick to his guns.

And that is exactly what he walked into in Sudan where the security forces were out in force as protesters took to the streets of the capital, Khartoum, on 30 June demanding an end to military rule.

The country has been hit by turmoil since the military ousted President Omar al-Bashir in April, but Zhakata hadn’t a clue what was going on.

He walked directly into the path of the protest as he was making his way to the Egyptian Consulate in Khartoum.

“I could tell that something was happening, but I couldn’t tell what,” said Zhakata.

“I saw graffiti on the walls written in Arabic, with the number 30, but I couldn’t understand it. There were soldiers everywhere and people told me it’s not safe.”

He was detained by police briefly and then released in what he calls a “shaking moment”.

People who were following his journey on social media then became extremely concerned as there was no news from Zhakata for more than a week.

The internet had been shut down in the country since a crackdown on pro-democracy activists on 3 June.

“I did find a place where I could go online for $30 (£24) for an hour. I saw all of these messages on social media with people being worried about me.”

His wry observations about life on the continent have been a subject of debate.

He posted one video as heavy rain turned the streets of Ethiopia’s capital into rivers, saying, “You hear that? These ain’t gunshots. It’s giant hail the size of tennis balls.”

“Everyone who helped us asked for a tip. Even police officers.”

In central Tanzania he observed that children of school-going age were working as vendors on the highway “selling farm produce, grapes, honey and fish. It seems education is not a priority in this part of the world”.

Besides the visa headaches, language was the most difficult barrier. In Tanzania he said most people were unwilling to communicate in English, and they were “even told to learn Swahili at school”.

In Ethiopia when he was ordered off a bus at 18:00 local time because of a transport curfew he tried to find a bar to watch the Warriors’ match that night – but ended up, after many crossed wires and an expensive taxi ride, at a shop selling sports equipment. 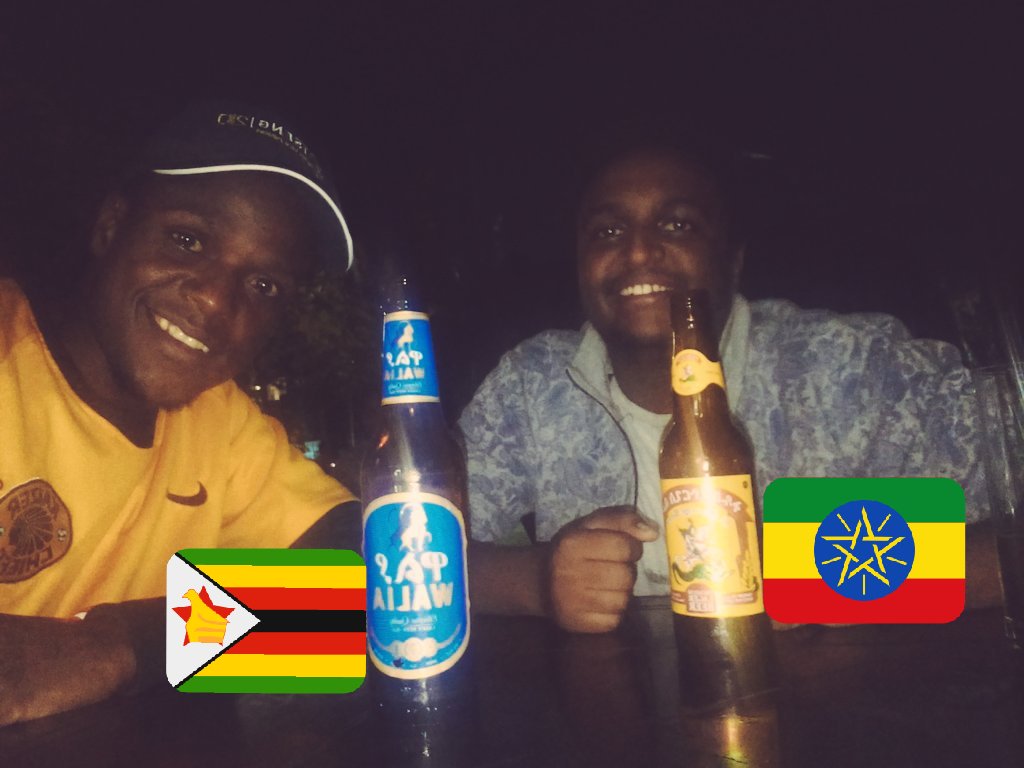 But he was welcomed in some towns by people who were following his journey online – like Firew Asrat in Hawassa in Ethiopoia, who gave him football shirts and shared a beer with him. He tweeted: “This #Tweethiopian is the walking embodiment of the mantra #AfricaUnite.”

He says he tasted the best beer of his trip in mainly Muslim Egypt – a Stella – perhaps out of relief that his exploits were over. The best food – of roasted meat and maize meal – was in Zambia.

His one disappointment has been the performance of the Warriors, who crashed out in the first round – amidst rows over pay.

But he says his achievement – which has become one of the biggest stories of this Africa Cup of Nations tournament – shows it pays to “dare to dream”.

“If you have a passion for something, go for it. Pursue it until you get it. It may be delayed, but delay is not denial – be patient and be strong, because the harder the battle, the sweeter the victory,” he says.

Where toilets have become a constitutional right