Africa’s hardest-hit country to permit sale of alcohol and tobacco as well as reopening of restaurants and taverns. 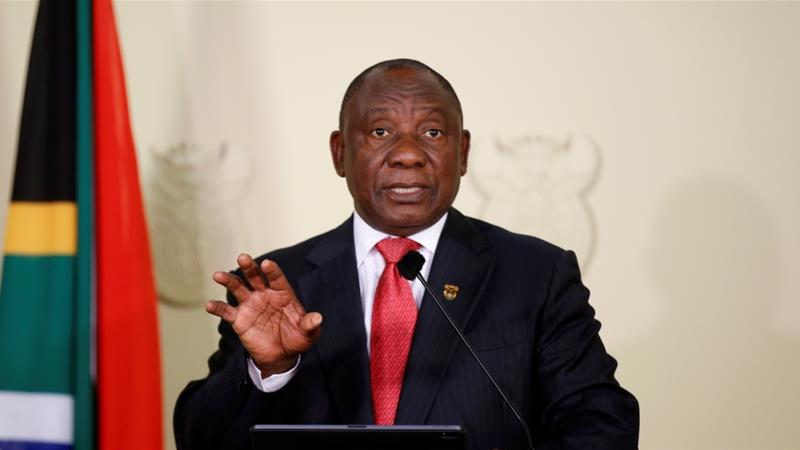 South African President Cyril Ramaphosa has announced that stringent coronavirus regulations would be eased as of Monday as the country’s infection rate falls.

In a televised address on Saturday, Ramaphosa said the government would end a ban on alcohol and tobacco sales, allow restaurants and taverns to return to normal business – subject to strict hygiene regulations – and remove the ban on travel between provinces.

“All indications are that South Africa has reached the peak and moved beyond the inflection point of the curve,” Ramaphosa said, adding that the cabinet had decided to move to lower, “level two” restrictions from midnight on Monday.

“The move to level two means that we can remove nearly all of the restrictions on the resumption of economic activity across most industries,” he said.

South Africa imposed in March one of the strictest lockdowns in the world as part of efforts to stem the spread of coronavirus. Alcohol sales were prohibited to ease pressure on hospitals, allowing doctors in emergency wards to focus on COVID-19 rather than road accidents and other booze-related injuries.

Tobacco products were restricted because of the health impacts of smoking as well as the risk of contamination between people sharing cigarettes.

South Africa still has the fifth-highest number of confirmed coronavirus cases in the world and the most on the African continent, with 583,653 infections and some 11,550 related deaths registered to date. More than 460,000 people have recovered.

The coronavirus pandemic has battered an economy already in recession and pushed millions of South Africans deeper into extreme poverty.

This, as well as a rise in recoveries, were “significantly reducing the pressure on our health facilities”, but he cautioned that cases could surge if people fail to maintain vigilance. Restrictions on international travel remained in place, he said.

The lifting of restrictions on alcohol will be a relief to the battered hospitality and drinks industries, some of which have been pushed close to bankruptcy and shed thousands of jobs.

“The further easing of restrictions presents us with the greatest opportunity since the start of the pandemic to breathe life into our struggling economy,” Ramaphosa said.

The announcement came almost two weeks after South Africa’s anti-corruption watchdog said it was investigating irregularities in government tenders during the coronavirus crisis.

It came after several media reports alleged that politically connected individuals have benefitted from government contracts for goods and services mobilised to contain the spread of COVID-19. Ramaphosa has previously promised swift action against anyone found guilty of corruption.

South Africa has been lauded by the World Health Organization for its efforts to curb the spread of the pandemic through medical interventions, disease monitoring and movement restrictions.