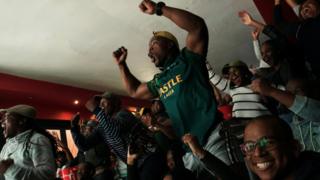 Across South Africa, they’ve been blowing their vuvuzelas, hugging, crying, grinning until it hurts, honking their car horns, pouring and throwing and spraying beer in all directions.

They are celebrating a comprehensive victory that seems all the sweeter for being set against a backdrop of economic hardship, rising inequality, populist race-baiting, staggering official corruption and serious concerns about this young, boisterous nation’s future.

“We can achieve anything if we work together as one,” said Siya Kolisi, South Africa’s now iconic black captain after the match in Japan.

And in bars, homes, halls, and giant open-air public viewing areas, his words seemed – at least for a moment – to ring true.

“I’m so happy!” screamed a black schoolgirl jumping for joy with her friends at a sports centre in a suburb of Johannesburg.

“We’ve gone through so much as a country and this is something positive we can celebrate as a country,” said a woman watching at a luxury resort outside the city.

“I feel this win will reunite us as a country. We’ve been segregated, with so much going on. So this win means so much,” said her friend.

South Africa has always cherished its reputation for pulling off miracles. After all, this was the nation that steered itself away from civil war and plotted a negotiated path out of racial apartheid towards democracy.

A year later, in 1995, a smiling Nelson Mandela watched the national team win its first Rugby World Cup and used that moment to build on his dream of a “rainbow nation”.

But the 1995 team had just one black player and many black South Africans struggled to share the enthusiasm of Mandela, and of their white compatriots so soon after the end of apartheid.

Today’s squad has twelve black players and has become a truly national team. 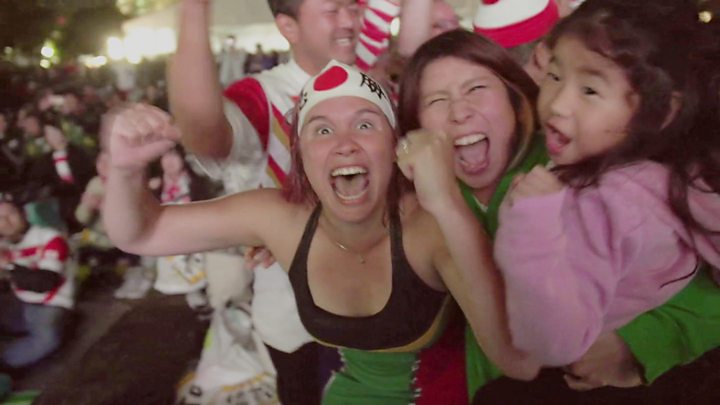 “We have come a long way from 1995 to where we are today. We are demonstrating to the world that we are a diverse and united nation,” said President Cyril Ramaphosa, who had gone to Japan to be with the Springbok team.

And there were other signs of South Africa’s progress on display today. Not just a black captain and a diverse squad, but smaller details like the fact that so many more whites in the crowd now appear to have learned the words to their multi-lingual national anthem – bellowing out all the African verses in the minutes before the match began.

But can success in a rugby competition transform a nation’s fortunes? Of course not. South Africans are all too aware that, come Monday, their economy will still be on the brink of being downgraded to junk status by international ratings agencies.

Youth unemployment will remain around the 50% mark. The power utility Eskom will continue to deliver blackouts as it hovers dangerously close to collapse. And the racial polarisation that has become entrenched in the country’s political scene will carry on.

“No we’re not (united),” said one of several voices on Twitter, responding to President Ramaphosa’s message. “Only our rugby team is a beacon of hope in the dark and dismal chaos that the ANC created and which you perpetuate.”