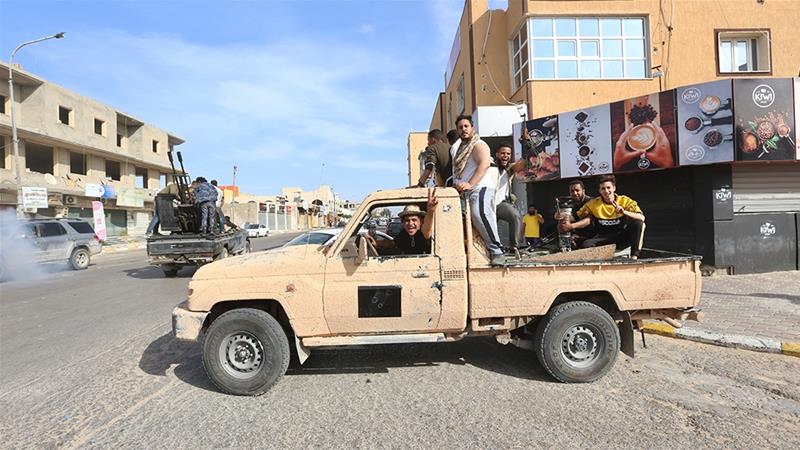 The announcement by military spokesman Mohamed Gnunu on Saturday came as forces aligned with the United Nations-recognised Government of National Accord (GNA) ramped up their offensive against Haftar’s forward bases in western Libya.

GNA troops have in recent days retaken a string of strategic cities located west of Tripoli, including Sabratha, Surman and al-Ajaylat.

Libya, a large oil producer, has been engulfed in chaos since 2011 when longtime leader Muammar Gaddafi was killed in a NATO-backed uprising.

It is now split between two rival administrations: The Tripoli-based GNA, led by Prime Minister Fayez al-Sarraj, and the House of Representatives allied to Haftar and his self-styled Libyan National Army (LNA).

In April 2019, Haftar launched a military campaign to wrest control of Tripoli but the offensive was largely stalled by forces loyal to the GNA.

Gnunu said GNA forces on Saturday overran a camp in the area of al-Hawatim near the city of Tarhouna, arresting 12 fighters from Haftar’s LNA and seizing several armoured vehicles.

“The latest developments are threatening the very existence of Haftar’s forces in the whole of western Libya,” said Al Jazeera’s Mahmoud Abdelwahed, reporting from Tripoli.

“The city of Tarhouna is a major stronghold for Haftar after they lost the city of Gharyan last June. It’s important to note that the central command of Haftar’s forces is now located in Tarhouna and it is from there that Egyptian, Emirati and Russian military experts are running Haftar’s offensive against Tripoli.”

On March 17, the UN and nine countries called on Libya’s warring sides to cease hostilities to allow health authorities to fight against the new coronavirus.

Numerous UN efforts to mediate a ceasefire have failed to result in a truce and have been on hold since envoy Ghassan Salame quit his post in early March, citing health reasons.