Mini-skirts and morals in Uganda 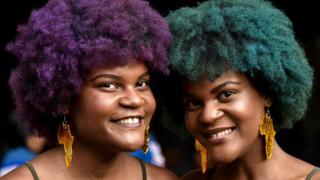 A new crackdown on what civil servants can wear in Uganda has reignited a fierce debate about morality, clothes and women’s rights in the country.

Women are not allowed to:

Adah Muwanga, human resources director at the Public Service Ministry, said the new circular was needed because of complaints – especially about female public officers – from male counterparts, who say “body parts should be covered”.

Civil servants are made aware of the dress rules at induction, says Moses Sempiira, a teacher.

“Each profession has got its code of conduct.

“When you’re at work, you have to dress up the way you’re expected.

“I have no problem with it.”

However, Rita Achiro, head of the Uganda Women’s Network, describes the order as a diversionary move.

“How does dress code affect service delivery?” she asks.

“What Ugandans need are more teachers and nurses.

“We have high maternal mortality, children in schools without teachers.

“I don’t see how the banning of mini-skirts and bright-coloured shirts is going to fix that.” 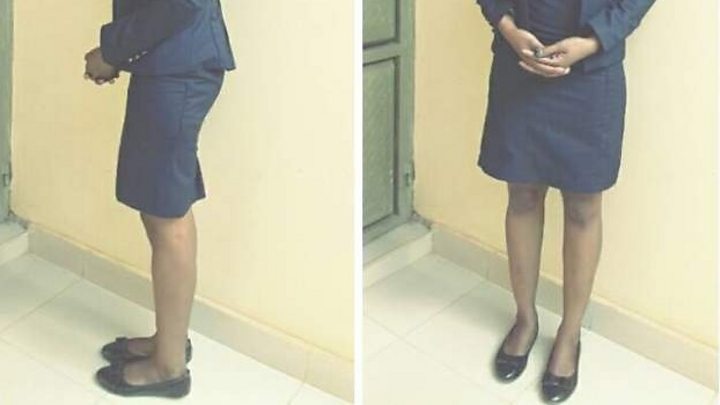 The debate on hemlines and neck-ties has gone beyond the formal setting of the public service.

In May, photos of two Makerere University students were shared widely on Facebook, with many Ugandans criticising them for wearing revealing skirts to a party.

Rebecca Naddamba, one of the two young women in the photos, was a final-year education student. She was dressed in a two-piece red outfit, with a long skirt made up of strips of cloth, showing her legs.

“People have asked me whether I am sane. Some said I shouldn’t be allowed to become a teacher,” she says.

The university wrote to her, citing “misconduct at a university function” and asking her to explain why she should not face disciplinary action.

Ms Nadamba thinks dressing should simply be about appropriateness.

“I am looking forward to becoming a teacher. I will tell my students that there is a difference between dressing for a classroom, a place of work and a party.”

Her case raised questions on whether Uganda, as a society, spends too much time and effort nit-picking what people should and should not wear.

“If decency was contained in clothes, we would spot a rapist or a corrupt politician from miles away”

Lawyer and activist Patience Akumu calls it the “institutionalisation” of the policing of women’s bodies. She thinks that public entities like Makerere University “shouldn’t pick and choose when to moralise”.

“Recently a girl jumped out of a window to near-death, after a friend allegedly tried to rape her,” she continues.

“Makerere did not issue a statement. Why are they now suddenly enraged?”

Uganda is caught up in rapid social change.

It takes only a short time for the latest trends seen in American films and pop music videos to arrive on the streets of Kampala.

On one side of life is the tabloid press, which thrives on daily pictures of half-naked women and columns about sex exploits. On the other, you have government officials telling people to cover up.

And there has been a spate of attacks on women deemed to be wearing clothes that are too revealing.

Lindsey Kukunda, an artist and writer, thinks it is an obsession with culture and religion – a fusion that oppresses women.

“If you’re a woman, your decency is in your clothes.

“If decency was contained in clothes, we would spot a rapist or a corrupt politician from miles away,” she argues.

The founder of Not Your Body, an online movement that documents incidents of harassment, Ms Kukunda has herself been a victim on Kampala’s streets.

“About a year ago, I was standing on the roadside waiting for a friend to pick me up. I was wearing shorts.

“Men started calling me a prostitute. I sought help from a traffic cop, who looked me up and down and said: ‘Well, isn’t that what you want?'”

For her, this is a sign that those in authority constantly promote the thinking that women should be questioned, or even punished, for their clothes.

Mrs Muwanga, from the Public Service ministry, says wearing a mini-skirt to work is tantamount to sexually harassing male colleagues, and if the new orders are violated, public officers are likely to face disciplinary action.

Ms Kukunda says her online movement is against this sort of thing.

“If there were more Lindsey Kukundas saying: ‘No, I will not let you inconvenience me because your eyes have a problem with my dimpled knees’, the people who push this attitude will start to keep quiet.”

Radio presenter and social critic James Onen believes men and women should wear whatever they want, but should accept the consequences of their choices.

“It is universally accepted that there are a certain set of physical attributes that men generally find appealing in women.

“When a woman dresses in such a way as to call attention to those physical attributes, it’s difficult for most people not to view it as deliberate action to draw attention,” he says.

Uganda’s Minister for Ethics and Integrity, Fr Simon Lokodo, referred me to the 2014 Anti-Pornography Act, when contacted for an interview. But the law says nothing about a national dress code.

Confusion over a clause that was removed before the bill became law, led to incidents of Ugandan women being publicly undressed.

When a group of women tried to get to the parliament building to protest against the public strippings, they were surrounded by heavily armed anti-riot police.

Ms Akumu, who was among the protesters, says little has changed since the grossly misinterpreted law was passed.

Ms Achiro, from the Uganda Women’s Network, refers to the new public service directive as a celebration of being colonised.

“We are insisting on neckties and suits. What does a man who likes to wear his African-batik shirt do?

“Our rights are being taken away piece by piece and soon we will have no space to speak,” she says.