Discussions due to resume on Monday with negotiators saying compromises have been reached. 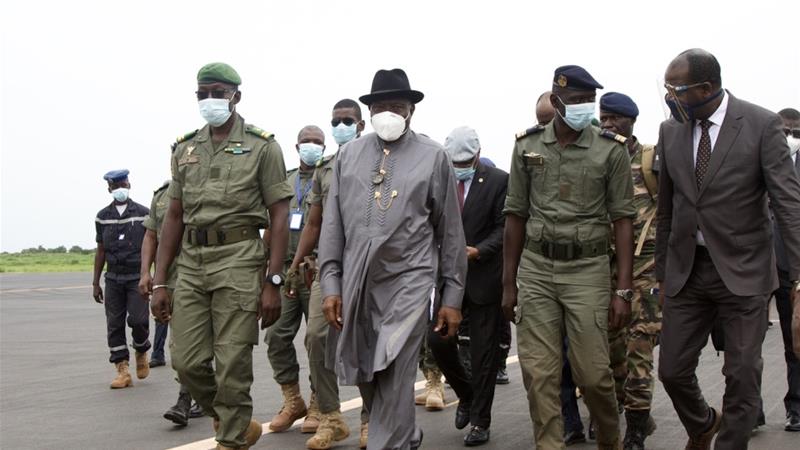 The military government that seized power in Mali wants a military-led transitional body to rule the country for three years and has agreed to release deposed President Ibrahim Boubacar Keita, a source in a visiting West African delegation said on Sunday.

“The junta has affirmed that it wants a three-year transition to review the foundations of the Malian state. This transition will be directed by a body led by a soldier, who will also be head of state,” a source in the ECOWAS delegation in capital Bamako told the AFP news agency.

“The government will also be predominantly composed of soldiers” under the military government’s proposal, the source said on condition of anonymity.

Leaders of the military government led by Colonel Assimi Goita and mediators from ECOWAS, West Africa’s regional bloc, led by Nigeria’s former president, Goodluck Jonathan, met behind closed doors all day on Sunday and are due to resume discussions on Monday.

“We have been able to agree on a number of points but not yet on all the discussions,” Jonathan told reporters on Sunday night after some nine hours of negotiations.

A spokesman for the military government, Colonel Ismael Wague, said: “We reached compromise on certain aspects and the negotiations will continue tomorrow.”

Neither gave details on what issues they had reached agreement on, and what were the outstanding issues.

The AFP source said the military government has agreed to “free president Keita”, who has been detained along with other political leaders since the coup on Tuesday, and he “will be able to return to his home” in Bamako.

“And if he wants to travel abroad for treatment, that is not a problem,” the ECOWAS source said.

Prime minister Boubou Cisse, who has been detained with 75-year-old Keita at a military base outside the capital where the coup began, would be moved to a secure residence in the city, the source said.

A military government official confirmed to AFP the decisions on the fate of Keita and Cisse, as well as that “the three-year transition would have a military president and a government mostly composed of soldiers”.

The coup followed months of protests calling for Keita to resign as public discontent with the government grew about the country’s brutal rebellion and collapsing economy.

While it met international condemnation, thousands of opposition supporters celebrated the president’s removal in the streets of Bamako.

The military government has said it “completed the work” of the protesters and has promised to stage elections “within a reasonable time”.

However, the 15-nation Economic Community of West African States (ECOWAS), weary of prolonged instability in Mali and the potential for similar power grabs in the region, has taken a hard line on the coup.

It suspended Mali from its decision-making institutions, shut borders and halted financial flows with the country.

Tuesday’s coup was Mali’s second in eight years, and has heightened concern about regional stability amid months of political unrest following a disputed election in March.