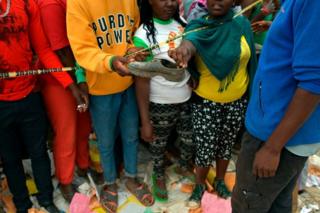 In our series of letters from African writers, Kenyan journalist Wahiga Mwaura says heads must roll when tragic events happen, yet very few officials seem to be held accountable.

The phrase “winners never quit and quitters never win”, coined by the late American Football player and coach Vince Lombardi, could also describe the mentality of many Kenyan civil servants.

Not the part about being winners but rather about never quitting – especially when disasters happen under their watch.

Kenyans have been outraged by two tragedies in the past fortnight that most would agree were preventable and ought to have led to resignations.

As I write this, divers are being despatched to Kenya from South Africa to search for the bodies of a 35-year-old woman and her four-year-old daughter in the Indian Ocean.

Just over a week ago, the pair had been travelling on a car ferry in Kenya’s busy Likoni channel when their vehicle slid off and sank with them inside.

It boggles the mind how this came to pass, considering that any vehicles aboard a ferry should be fully secured before it can set off.

It is possible that the driver made a mistake. Nonetheless there should have been a safety plan in place and divers on stand-by. But there were none.

To add insult to injury, the ferry company went on to wish everyone a “blessed and fruitful day” on its social media pages later that day. It angered many Kenyans.

Politicians were quick to express their outrage, and a Water Resources Management Authority spokeswoman said the dam had been built illegally. The farm’s manager denied any wrongdoing.

More than a year later, no government officials have lost their jobs and nobody has been convicted for the deaths.

And who will cry out for the 11 endangered rhinos that died last year after a botched relocation attempt from Nairobi National Park to the country’s biggest national park, Tsavo East?

According to Kenya’s market-leading newspaper Daily Nation, a parliamentary committee pointed an accusing finger at Tourism and Wildlife Minister Najib Balala, saying he should take full responsibility for the deaths.

But the minister denied any wrongdoing, and passed the buck on to the agencies that coordinated the relocation.

I could cite yet more examples to prove my argument, that in Kenya nobody in authority takes responsibility when things go wrong.

Until accountability becomes common practice the usual cycle will repeat itself.

Social media activist Phillip Ogola once aptly captured the response of politicians to a disaster as follows: “Rush to the scene, condole families, donate items, issue a tough statement, form a commission, wait for another disaster, repeat above”.

Hopefully one day that will change.