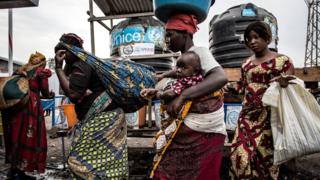 More than 1,800 people have died and more than 2,700 have been infected in the latest outbreak of Ebola in central Africa.

The World Health Organization (WHO) has declared the crisis a public health emergency of international concern.

The outbreak is the second-largest in the history of the virus. It follows the 2013-16 epidemic in West Africa that killed more than 11,300 people.

1. Ebola cases are on the rise

So far, more than 1,800 people have died in the Democratic Republic of Congo in the latest outbreak, which began in August last year.

The death of a priest from the disease in the eastern city of Goma, a major transport hub on the DR Congo-Rwanda border, could be a “game-changer” given the city has a large population, the WHO said.

He had travelled 200km (125 miles) by bus from Butembo – one of the towns hardest hit by Ebola – where he had mixed with worshippers sick with the disease.

The DR Congo health ministry said the driver of the bus he was travelling on and the other 18 passengers were being vaccinated.

However, the case has heightened concerns the outbreak could spread to Rwanda.

The country’s authorities have ruled out closing the border saying the priest’s death was not sufficient reason to shut the frontier.

The current 12-month epidemic began in the eastern region of Kivu in the DR Congo and cases have since been reported in neighbouring Ituri.

The latest case in the border transport hub of Goma is of particular concern to health authorities, as it is far harder to isolate patients and trace contacts in major cities, where highly-mobile, large populations are living in close proximity.

Goma adjoins the city of Gisenyi on the Rwandan side, and people travel between the two places every day.

Rwanda has stepped up border monitoring and has urged its citizens to avoid “unnecessary” travel to DR Congo. Some 2,600 health workers had also been vaccinated.

Ugandan health officials are also screening travellers at the border to check their temperature and disinfect their hands.

Three Ebola cases that originated in DR Congo were confirmed in the country last month, but no new cases have been registered there.

The country’s health minister, Jane Ruth Aceng, said the challenge was to stop people crossing at “unofficial entry points” between the two countries.

3. The virus can spread quickly

Even funerals of Ebola victims can be a risk, if mourners have direct contact with the body of the deceased.

Initial symptoms can include a sudden fever, intense weakness, muscle pain and a sore throat, according to the WHO.

Subsequent stages can bring vomiting, diarrhoea and – in some cases – both internal and external bleeding.

Patients tend to die from dehydration and multiple organ failure.

Ebola first appeared in 1976 in two simultaneous outbreaks, one in what is now South Sudan, and the other in DR Congo. The latter occurred in a village near the Ebola River, from which the disease takes its name.

There are normally fewer than 500 cases reported each year, and no cases were reported at all between 1979 and 1994.

The current outbreak is the worst on record after an epidemic that struck Liberia, Guinea and Sierra Leone between 2013-16, leaving more than 11,300 people dead.

It killed five times more than all other known Ebola outbreaks combined.

The WHO has warned the world is entering “a new phase” where large outbreaks of such deadly diseases are a “new normal”.

4. The virus can be fatal, but there are treatments

The fatality rate from Ebola is high – up to 90%, according to the WHO, and there is no proven cure as yet.

However, rehydration with oral or intravenous fluids and the treatment of specific symptoms can improve survival – especially if the virus is caught early.

Ebola patients are channelled into specialist treatment centres, where those of high-risk are separated from those of low-risk.

Although medics currently treat Ebola’s symptoms rather than offer a cure, a range of new drugs, blood products and immune therapies are currently being tested.

A multiple drug trial is currently under way in DR Congo to fully evaluate effectiveness, according to the WHO.

An experimental vaccine, which proved highly protective in a major trial in Guinea in 2015, has now been given to more than 130,000 people in DR Congo.

Thousands of health workers across the region have also been vaccinated.

5. With the right action, the spread can be stopped

The key to containing and controlling an outbreak is good communication with affected communities, the WHO says.

It is crucial to trace those who may have been in contact with infected people, ensuring they get tested and receive treatment, but people also need to know how to reduce the risk of passing on the virus.

The WHO and its partners are communicating advice to affected communities. Recommendations include:

In Uganda, mass gatherings including market days and prayers have been cancelled.

Tackling the disease in the DR Congo, however, has been complicated by conflict – between January and June there were more than 170 attacks on health workers and facilities.

Distrust of authorities is also a problem.