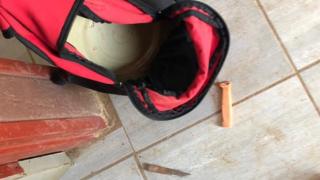 A South African teenager is in police custody accused of stabbing to death a young boy in a school toilet, where he had hidden in wait for him overnight.

The grade one pupil, thought to be seven-years-old, was stabbed multiple times, the authorities said.

The alleged perpetrator was thought to have been in a relationship with the victim’s older sister, they added.

The police are carrying out further investigations at the primary school in Makapanstad in North West province.

The suspect is a student in grade 11, which is usually for 16 and 17-year-olds, who attends a nearby secondary school. The victim was in grade one, usually for six and seven-year-olds.

The suspect “apparently slept in the toilet overnight without anyone knowing he was there”, the local education authority said in a statement.

He then stabbed the victim, who was taken to a local clinic but medics were unable to save his life.

The young boy may have been targeted after the suspect fell out with his older sister, the local authority said.

“Words cannot begin to comprehend the heartache caused by this tragic incident,” Education Minister Angie Motshekga is quoted as saying.

Officials were due to visit the school on Thursday.