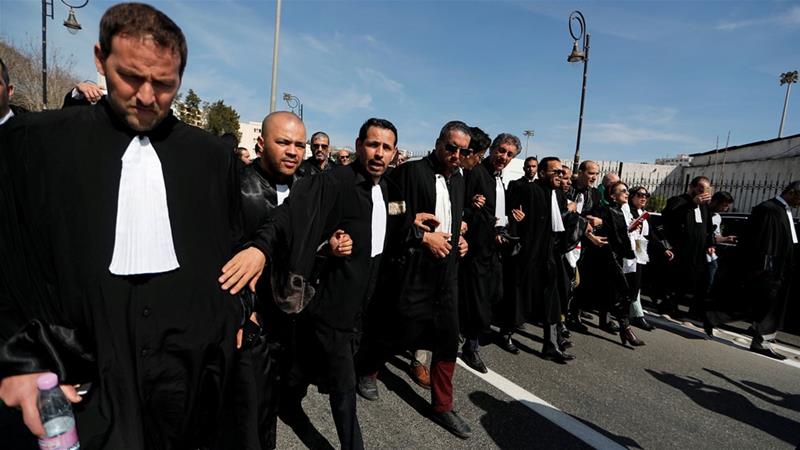 Algerian President Abdelaziz Bouteflika has warned that the ongoing protests against his reelection campaign risk being exploited by “internal and external” parties attempting to disrupt the country’s stability.

Tens of thousands of Algerians have taken part in nationwide protests since February 22, challenging Bouteflika’s attempt to run for a fifth consecutive term in office.

In a letter carried by the official Algeria Press Service news agency on Thursday, Bouteflika welcomed the peaceful nature of the demonstrations, but cautioned against infiltration aimed at “stirring seditions and spreading chaos”.

“There are many people who regret that Algeria survived … peacefully and serenely the surge of the Arab Spring,” the 82-year-old said.

“These circles, which envy our liberty, independence of our decisions and our just positions, have never ceased to conspire against our country.”

The statement reflected a growing concern among government officials that traditional supporters were becoming “more sympathetic with the protest movement”, Riccardo Fabiani, an analyst at Energy Aspects, told Al Jazeera.

“Bouteflika and his allies are trying to rally their supporters around the president’s flagship policy of stability,” said Fabiani.

“After all, this is the main achievement, having brought stability back to Algeria after 10 years of civil war. These messages aim to close ranks within the pro-regime coalition of interests and constituents.”

A veteran of the country’s war of independence against colonial France, Bouteflika has seen his popularity wane in recent years as a result of his deteriorating health.

He suffered a serious stroke in 2013, and the wheelchair-bound president has not addressed the nation since then. He was, however, reelected a year later for a fourth term.

Analysts say a combination of memories of the civil war and generous state subsidies – the result of high oil prices – have both played a role in helping the president weather the wave of protests that toppled leaders elsewhere in the region.

But the announcement on February 10 that Bouteflika would run for a fifth term in the April 18 election did not prove popular.

Defying a 2001 ban on protest in the capital Algiers, tens of thousands of people turned up on February 22 to demand the ailing president step down.

Security sources at the interior ministry told local media that as many as 800,000 people turned up to the protest in downtown Algiers last Friday.

In response, Bouteflika said that if he were elected, he would organise a national dialogue, reform the constitution and schedule elections within a year.

However, that has done little to assuage protesters, who have grown in number and spread to different parts of the country.

On Thursday, the protests continued when several hundred lawyers gathered in downtown Algiers and called for Bouteflika to be disqualified from running for the country’s top job.

They breached police cordons to march on the Constitutional Council, the body responsible for approving the candidacy of the 21 people registered to contest the poll.

Footage on social media showed the demonstrators being applauded.

“We are asking the Constitutional Council to assume its responsibilities,” Ahmed Dahim, a member of the Bar Association of Algiers, told AFP as nearby colleagues chanted “no to the fifth mandate”.

By law, presidential hopefuls must prove they are medically fit to run in the election.

The constitutional body has until March 14 to decide on the list of candidates.

Dozens of journalists also staged a rally in the Press Freedom Square in Algiers, alleging they were pressured to skew their coverage in favour of the incumbent.

Reporters from the Arabic-language Echorouk El Yawmi and El Bilad newspapers said they lost advertisements from public institutions in response to their coverage of the protests.

In a separate development, France announced it was watching the situation in Algeria closely, but insisted it was up to Algerians to decide their future.

“The current stance adopted by the French government is probably the only possible course of action,” said Fabiani.

“Algerians would reject any attempt to interfere in their internal affairs and any suggestion coming from the international community, even if well-intentioned, could easily backfire and reinforce the other side.”