The EU chief told his 454,000 followers it was easy to forgot “how easily wars start and how difficult they are to stop” as the world honoured its war dead from the First World War. But Twitter users hit back saying it was NATO that “maintained peace” – not the EU.

Mr Verhofstadt said: “A century ago my country was known for the senseless & endless war waged in it. Brave little Belgium. Flanders Fields.

“Never forget how easily wars start & how difficult they are to stop.

“Cherish the EU for what it is at heart: the bravest peace project ever. #LestWeForget” 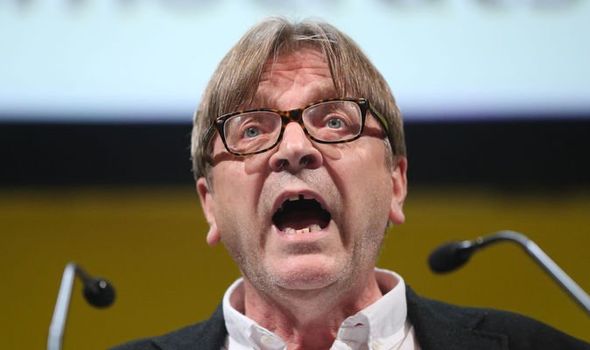 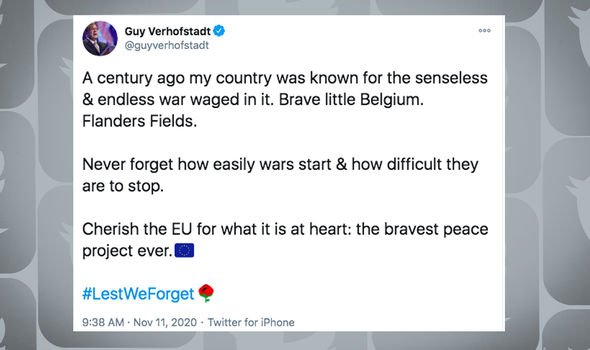 But critics said his remarks were “nonsense”.

“In the Balkan conflict the EU sat back and did nothing.

“It was left to the UK to consult directly with other European allies, get involved and restore peace.”

Another said: “NATO has prevented major war, not the EU. This is a fallacy perpetuated to justify the formation of an EU army.

“The EU grew out of a trading agreement, not a defence treaty.”

On posted: “I lost two great uncles in Flanders, fighting to give the ppl of Europe the freedoms they enjoy today.

“Without these people, the EU project would be a fragment of your imagination.

“Respect #Brexit and the millions who voted for it.”

Another asked: “What war has the EU prevented?”

One added: “NATO kept the peace. Cherish Europe not the EU, there’s a difference.

This year, Armistice Day marks the centenary of the burial of the Unknown Warrior in London’s Westminster Abbey after the end of the First World War.

Commemorations marked the funeral of the unknown British serviceman whose body was brought back from northern France in 1920.

He was laid to rest at the west end of the abbey’s nave on November 11 that year to represent all those who lost their lives in the First World War but whose place of death was unknown or body never found.