Donald Trump failed to squeak by with enough votes to retain his incumbency this year, as Democrat voters turned out in force behind Joe Biden. The race makes Mr Trump a rare one-term president, but he has chosen not to concede, spouting unfounded claims of electoral fraud. The latest events may ring familiar for millions of Americans who witnessed the 2000 presidential race between Al Gore and George W Bush.

Was Al Gore ever president?

Following Mr Trump’s vow to fight this year’s election results, Republican campaign staffer Tim Murtaugh posted a picture of his office decked with posters of an article from the Washington Times.

The front page spread of the publication’s election edition bore the headline “President Gore”, detailing a “bare majority” win for the candidate. 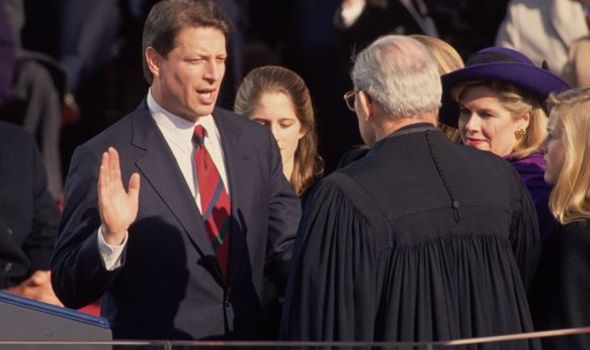 The publication took to Twitter stating the photos posted “had been doctored”.

They added the publication “never ran a ‘President Gore’ headline”.

Al Gore ran on the Democrat presidential ticket against George W Bush in 2000, which culminated in a bitter dispute over the state of Florida.

Lack of a clear winner in the state led to a polling stalemate, with several conflicting exit polls emerging in the press, and a court case titled Bush v Gore 2000.

On the evening of November 7, no clear candidate had emerged in the 2000 election, with inconclusive results for Oregon, New Mexico and Florida.

The latter state, known as a key battleground for its (at the time) 25 Electoral College votes, first had Mr Gore declared as the winner, and then Mr Bush.

Fewer than 600 votes ultimately separated the candidates, and both campaigns despatched lawyers to Florida to argue for a recount.

After documenting “chads”, both hanging and pregnant, which referred to the condition of some ballots, the issue went to the state Supreme Court.

Justices ultimately decided to order a recount in four counties of questionable ballots which officials must factor in.

After more than a month on December 12, the Supreme Court overturned the Florida decision five to four the recount should cease.

The decision handed Mr Bush the 25 votes and the presidency.

Gore later conceded in a television address, stating: “While I strongly disagree with the court’s decision, I accept it.”

So, while Mr Gore never held the presidency, the position was up for argument for more than a month after voting day.

Mr Trump has introduced similar challenges to the vote this year and threatened legal action in several states he disputes.

The President has wrongly asserted evidence exists of fraudulent voting and only disputed the results in states he has lost.