The Met Office has forecasted another wet day for most of the UK as a band of rain moves across the country. Meteorologist Alex Deakin explained that although it may begin dry in the southeast another pulse of rain is to move in through the afternoon. This new band of rain will bring a threat of thunderstorms to the southeast as it ensures temperatures remain relatively low for June.

Mr Deakin began: “Today marks the middle of a very wet week with further wet weather to come over the next few days after some very soggy conditions through Monday and Tuesday.

“There is a continued risk of problems from the rain and continued threats of flooding and we continue to have yellow weather warnings in force.

“It is all from an area of low pressure, it has been largely dry and fine in northern Scotland and we will see some sunshine here on Wednesday.

“It is looking like a wetter day for Northern Ireland and the rain extending to southern Scotland, north-east England. 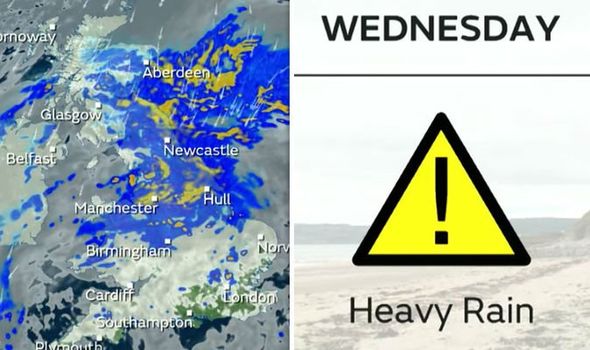 “With the southeast there is also further rain arriving.

“That will spread its way to southeastern areas and another pulse of rain working into East Anglia later on too.

“There will also be a brisk breeze coming in from the North Sea.”

The Met Office Meteorologist added that it could be drier than it has been this week in the West Midlands.

These sunny spells could extend into the late afternoon in these areas as well as the majority of Wales and southwest England.

Mr Deakin went on to say that the pulse of rain moving in from the east could also bring some more extreme weather.

He continued: “In the southeast could brighten up with some sunshine but that could trigger some heavy and possibly thundery showers here through the afternoon.

“The best place for dry weather for most of the day will be northwest Scotland but there will be still quite a brisk breeze blowing here.

“Even where we see any sunshine temperatures are going to struggle.

“At best most places 14 or 15C and possibly a little higher in the southeast with a bit of sunshine.”