BRITAIN is braced for more severe weather conditions as two weeks' rain is set to fall in just three hours.

A yellow warning for rain has been issued by the Met Office for Scotland and flood alerts are in place for certain parts of England. 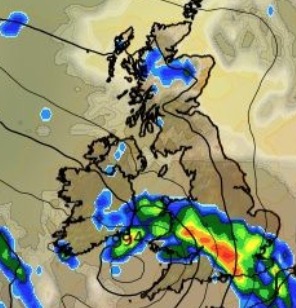 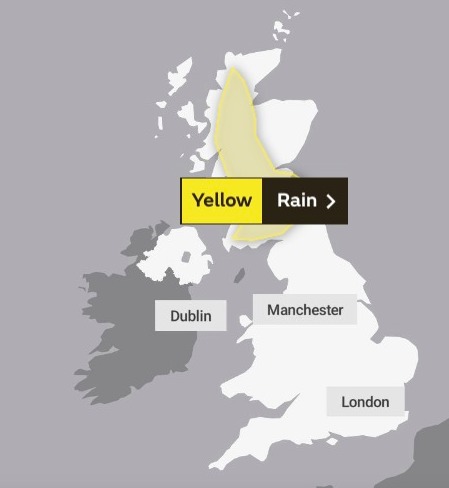 The Met Office said: “Low-pressure systems will continue to dominate the weather this week so further rain is coming, but we will also see things turning windier and eventually we will lose the humid air and it will turn fresher.

Today there will outbreaks of rain over Northern Ireland and northern England which will move north and turning more showery.

Tonight mist and fog patches will form under clear spells but strengthening winds and rain arriving across south-western parts.

Elsewhere there will be sunny spells but scattered heavy showers will develop across Britain with a risk of thunder.

A yellow warning for heavy rain is in place through the centre of Scotland and into the borers of the region from Tuesday afternoon until Tuesday night.

Some places could experience bursts of 20-25mm of rainfall in just one hour or up to 50mm in a few hours, according to Met Office forecaster Greg Dewhurst.

He continued: “England and Wales continue to have sunshine and showers, some of the showers could be heavy with thunder, but overall the showers will probably be less frequent compared to the last few days and not quite as intense." 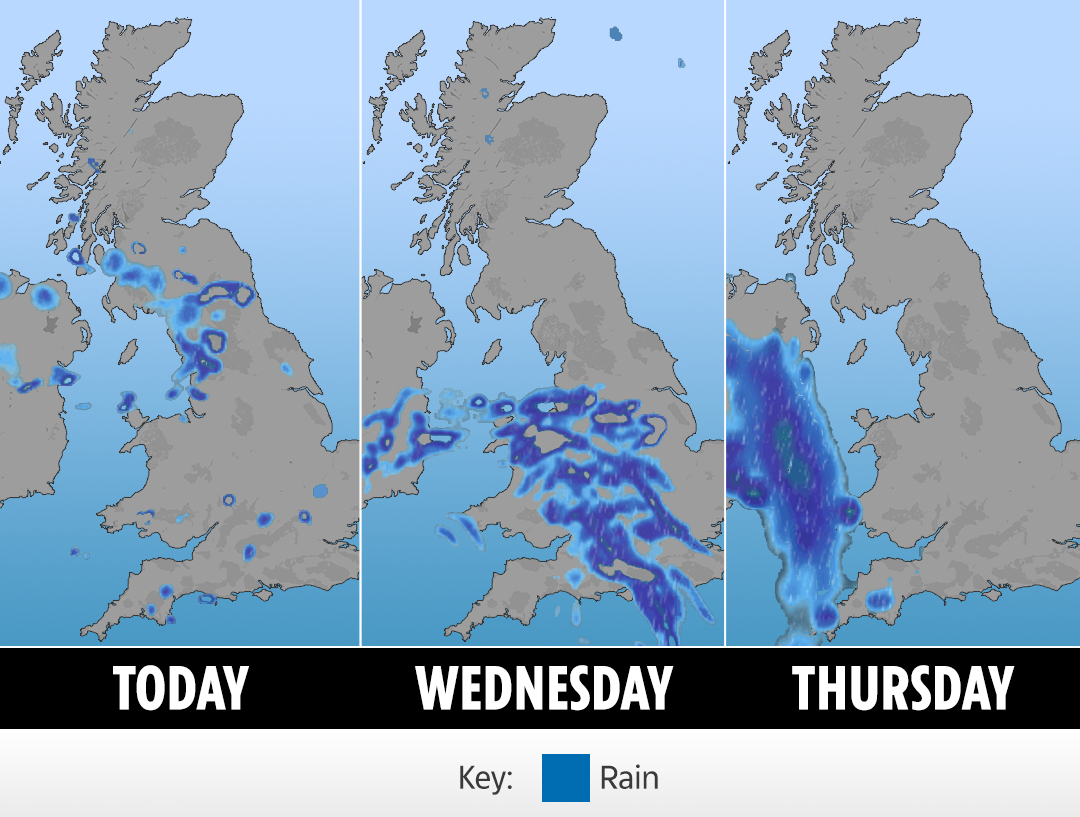 The heavy rainfall could lead to flooding, road closures and transport delays but should ease by Tuesday evening.

By Wednesday the rain will move north with drier spells and Britain can expect some much-needed sunshine.

Later in the evening, the south-west will experience further wet and possibly very windy weather.

The Environment Agency has issued several flood alerts for parts of the Midlands around Birmingham over the next few days.

Last night emergency services worked through the night to deal with more than 60 calls for help in Barnstaple, Devon.

Images showed water several feet high covering roads and pavements that caused traffic chaos across the area with some drivers abandoning their cars.

Crews from the emergency services then spent the night helping to pump water out of the affected homes.

Local resident Rob Tibbles took pictures of the chaos after clearing out his own home of floodwater.

Another local resident said: "It was a biblical rainstorm and within 10 minutes the place became gridlocked."

The heavy flooding comes after temperatures reached a scorching 37C in parts of the UK last week.

August 7 was recorded the hottest August day for 17 years, with the highest temperature recorded at 38.5C at Faversham in Kent. 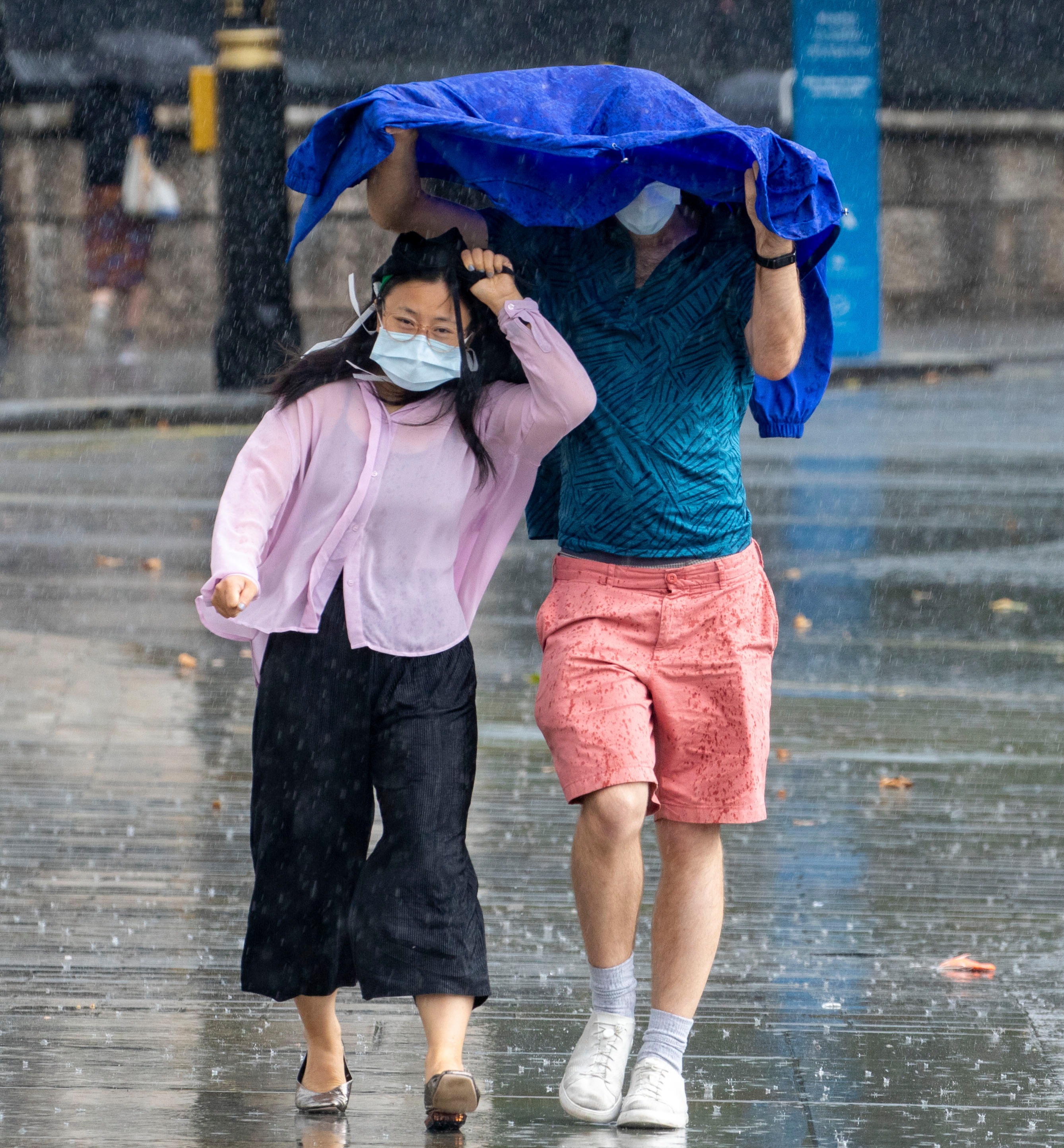 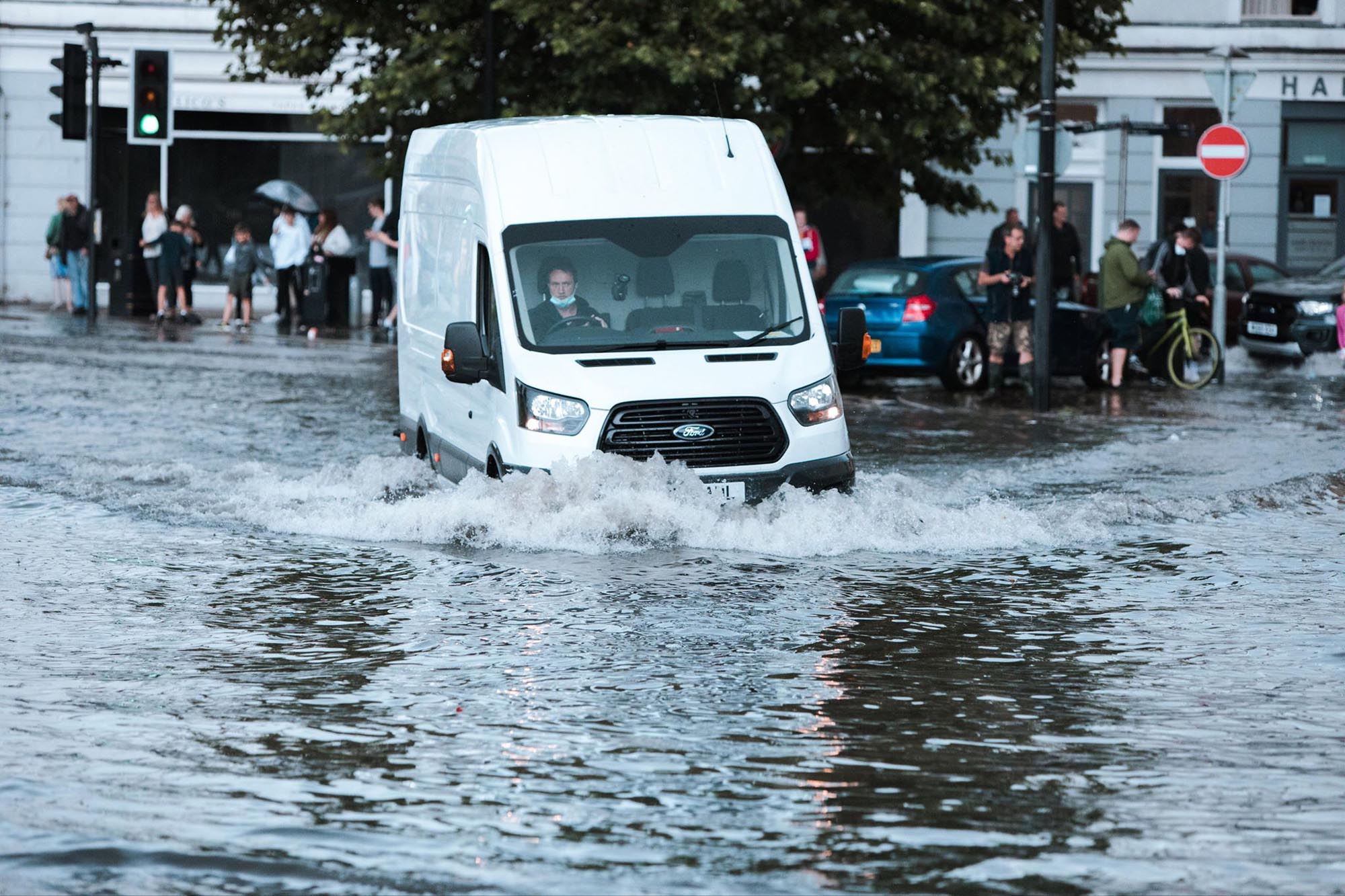 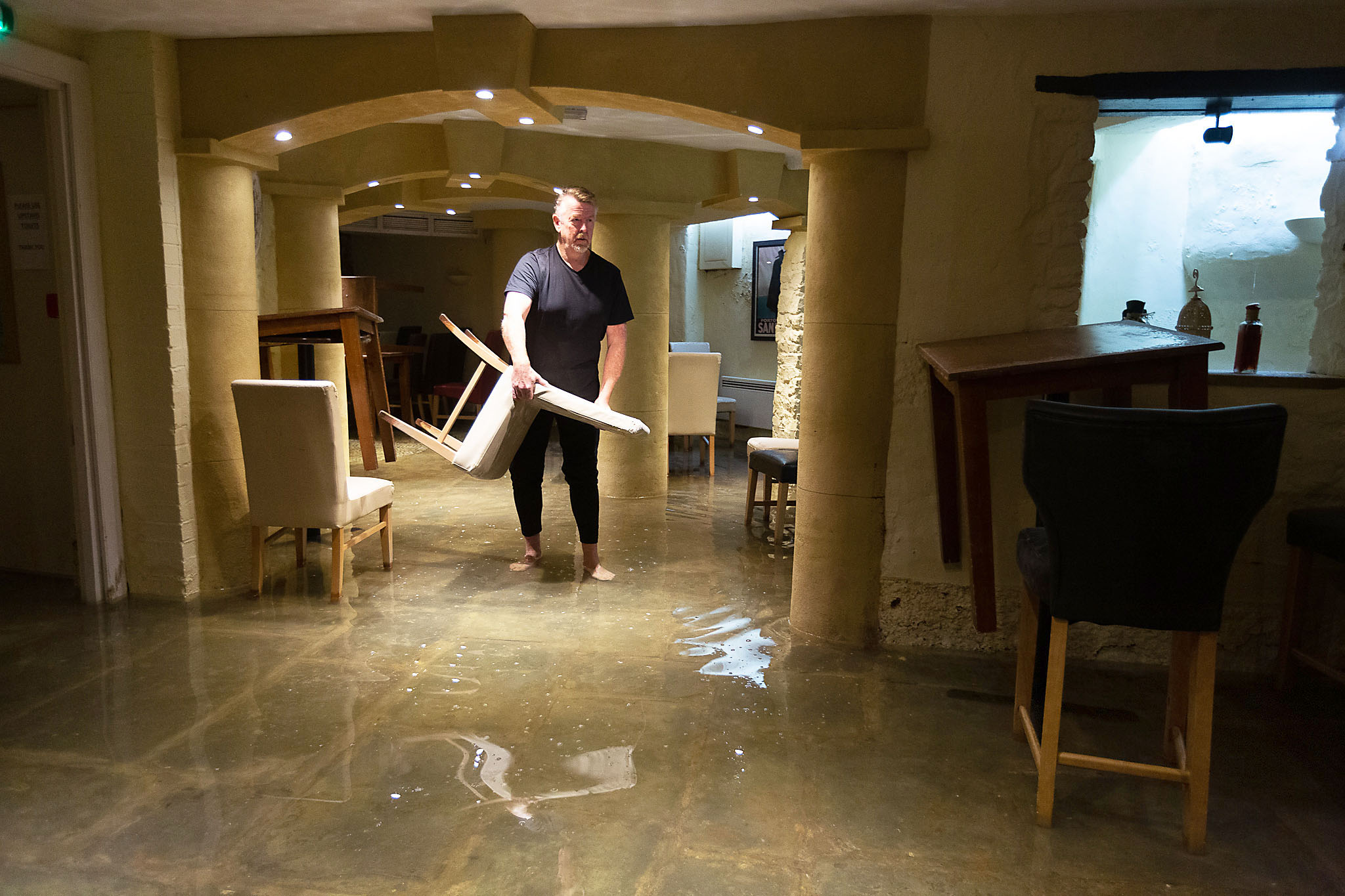 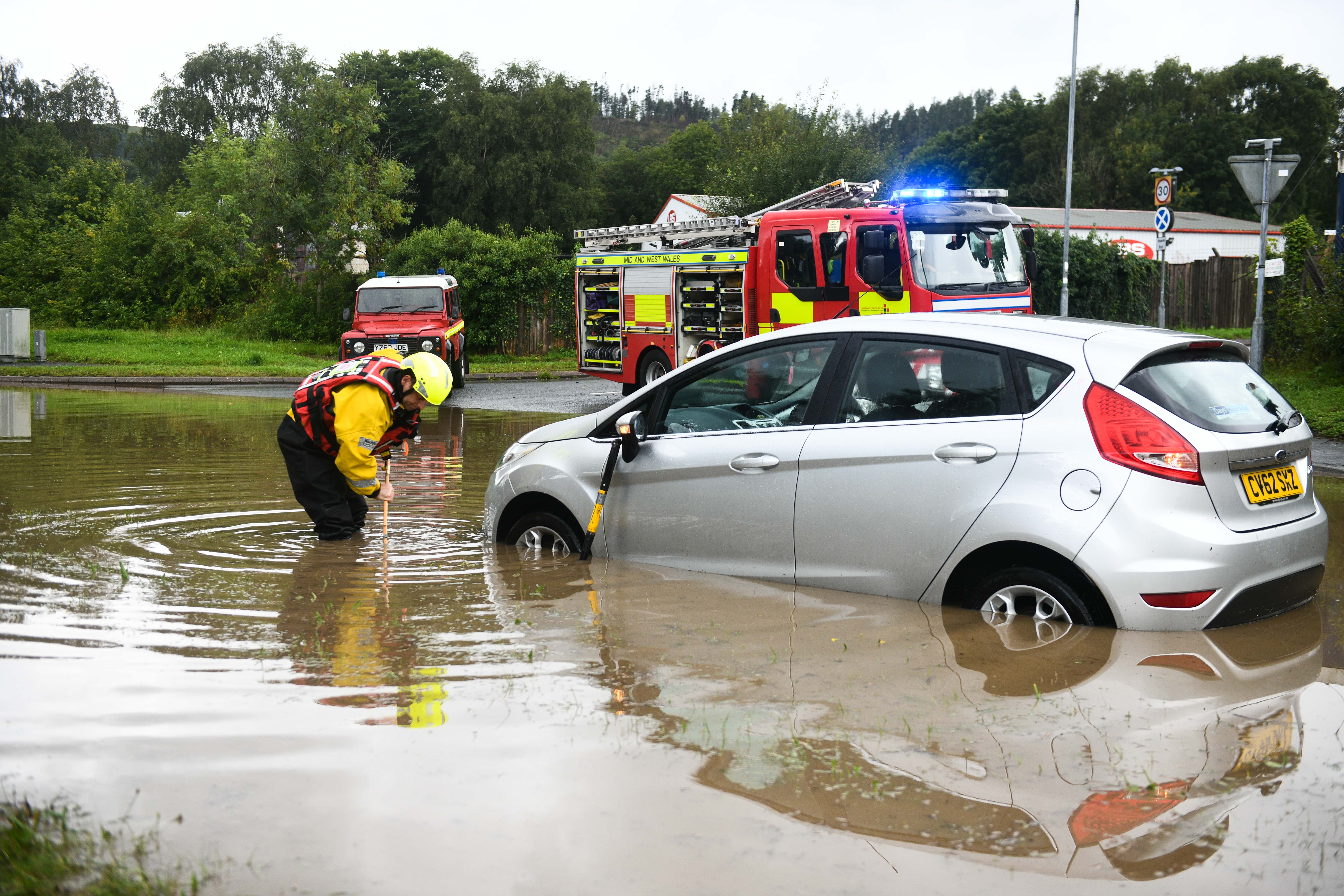 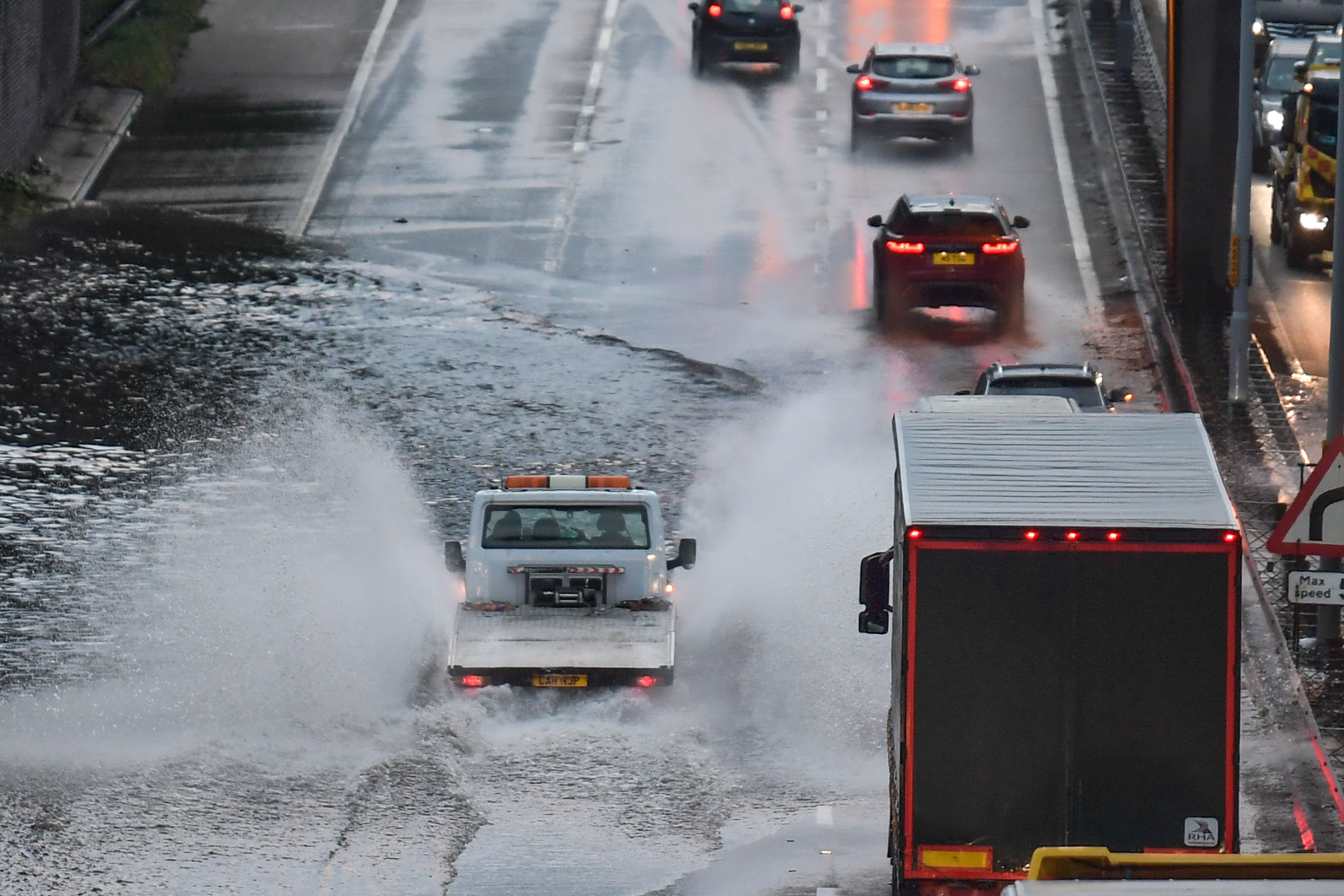