TfL Tube strike LIVE and UK rail updates: Underground lines are suspended until 8am and mainline trains restart from 7.30am as RMT and rail bosses hold talks today

Follow live updates here as the impact of the Rail, Maritime and Transport union’s strike at Network Rail and 13 train operators continues today:

Deputy Prime Minister Dominic Raab said today that the rising inflation figures – with a rate of 9.1 per cent revealed today – showed the need for pay restraint in the public sector and on the railways. He told Sky News there was a risk of a ‘vicious cycle’ of rising wages pushing inflation even higher if union demands were met, saying the Government was taking a ‘firm line’.

‘We are facing a global struggle against inflation, if you look at the UK figures they are broadly comparable to the US or, in Europe, the Dutch and the Belgians, and it’s going to be difficult. We really do understand the pressure that those on low incomes are facing at the moment, they are struggling to make ends meet.’

Setting out why public sector pay could not keep pace with inflation, he added: ‘If we don’t have those restraints, inflation will go higher for longer. And that will only undermine the pay packages of workers, particularly the most vulnerable workers, for a longer period of time. We’re taking the action, we’re taking a firm line with, for example, the RMT union, precisely because we want to protect this erosion of pay packets by inflation.’

Disruption caused by yesterday’s rail strikes will mean that ‘today is going to be quite a messy day’, for travellers, the independent watchdog for transport users said this morning.

‘Virtually all of the train companies have special timetables in place, services are starting up late and trains and staff are not in the right place. So please do not assume that this is a normal day.

‘If you are going to travel by train check before you leave the house, check on the way to the station and, for goodness sake, bring a bottle of water with you.’

The Waterloo & City line, which was completely suspended yesterday, is now running again this morning – as are the Northern and Victoria lines.

The Jubilee line is now running but with ‘severe delays’. There is currently no service on any other lines, according to the Transport for London website.

Stansted Express said services will ‘start later than usual this morning’ and urged passengers to ‘check times before you travel.

RMT general secretary Mick Lynch said the turnout at picket lines yesterday was ‘fantastic’ and had exceeded expectations in the union’s campaign for job security, defending conditions and a decent pay rise.

He said: ‘Our members will continue the campaign and have shown outstanding unity in the pursuit of a settlement to this dispute.

‘RMT members are leading the way for all workers in this country who are sick and tired of having their pay and conditions slashed by a mixture of big business profits and Government policy. Now is the time to stand up and fight for every single railway worker in this dispute that we will win.’ 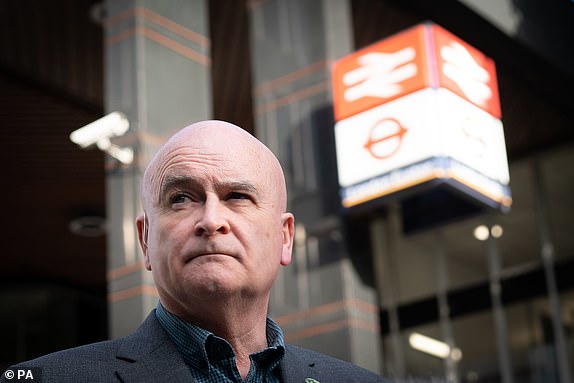 A survey of over 2,300 people by Savanta ComRes showed that 58% said the industrial action was justified.

Three out of five of those polled said they are generally supportive of the principle of industrial action, while just 35% were generally opposed.

As Britain’s railway network was paralysed yesterday by the RMT’s national strike, the most famous and feared hard-Left union leader in living memory emerged from a reclusive retirement.

Arthur Scargill appeared at Wakefield railway station yesterday, where a by-election takes place tomorrow. Read all about it in Richard Pendlebury’s report for the Daily Mail:

The London Tramlink running through Croydon is suffering ‘minor delays due to unavailability of staff’ this morning, according to Transport for London.

Moments after listing most Underground lines as having a ‘good service’ again, the Transport for London website has now made almost all of them ‘suspended’.

Only the Northern and Victoria lines are now listed as having a ‘good service’.

All other lines remain ‘suspended’. We’ll keep an eye on this to see what happens next, but it appears most lines are not back up and running after all.

Most London Underground lines have suddenly been listed as back up and running with a ‘good service’ on the Transport for London website – just minutes after they were almost all suspended.

However, the Central and Circle lines are still listed as ‘suspended’, while the Bakerloo is listed as ‘service closed’ until 8am.

Royal Mail workers have demanded a ‘no strings, inflation-based’ pay rise as they prepare to vote on industrial action, while 450,000 teachers are considering joining striking rail workers on the picket line. Here is the full story on MailOnline:

Militant unions have been accused of wanting to preserve ‘Spanish practices’ that include sending nine workers to ‘change a plug socket’, banning staff from working 500 yards from base and giving drivers 12 minutes of pay for making a 60-second walk. Here is the full story on MailOnline:

c2c, which restarted services at 6.30m this morning, has already had to cancel the 7.39am train from Shoeburyness to London Fenchurch Street ‘due to the train driver being taken ill’.

Clapham Junction station in South West London was eerily quiet this morning with no trains due until after 7.30am today, 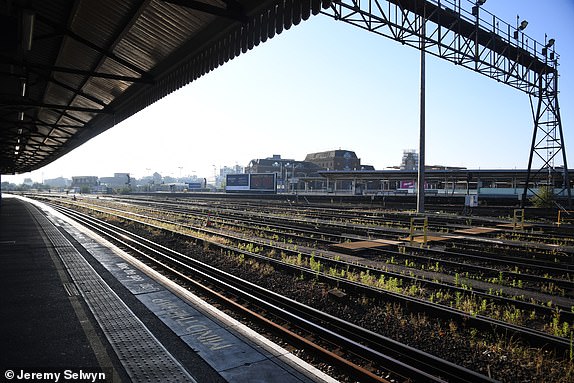 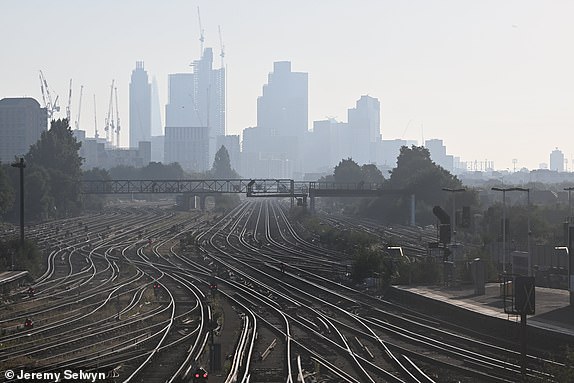 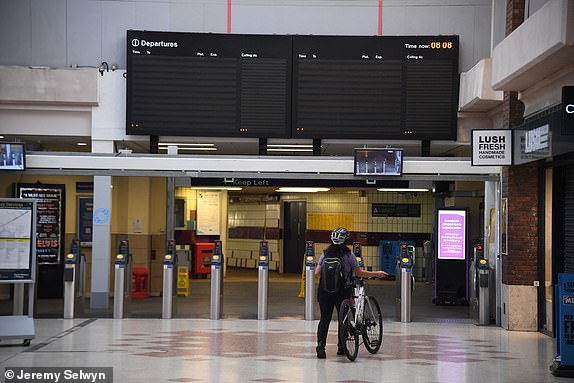 With London Underground services not due to restart until 8am this morning, commuters are having to queue up for buses again to get into work. 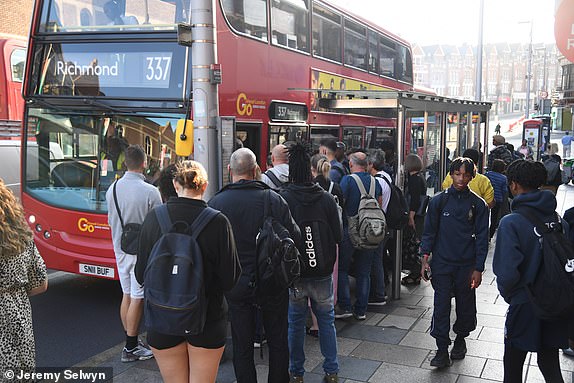 The Rail, Maritime and Transport union (RMT) will meet with Network Rail and the train companies today in another attempt to break the deadlock.

RMT general secretary Mick Lynch said the turnout at picket lines yesterday was ‘fantastic’ and had exceeded expectations in the union’s campaign for job security, defending conditions and a decent pay rise.

The RMT has also been asked by Network Rail to attend formal consultation talks next month on introducing ‘modern working practices’.

Network Rail has urged passengers to ‘check before you travel’ this week, with a special timetable set to be in place on all lines up to and including Sunday:

Let’s take a look at this morning’s newspaper front pages – all of which feature the rail strikes prominently: 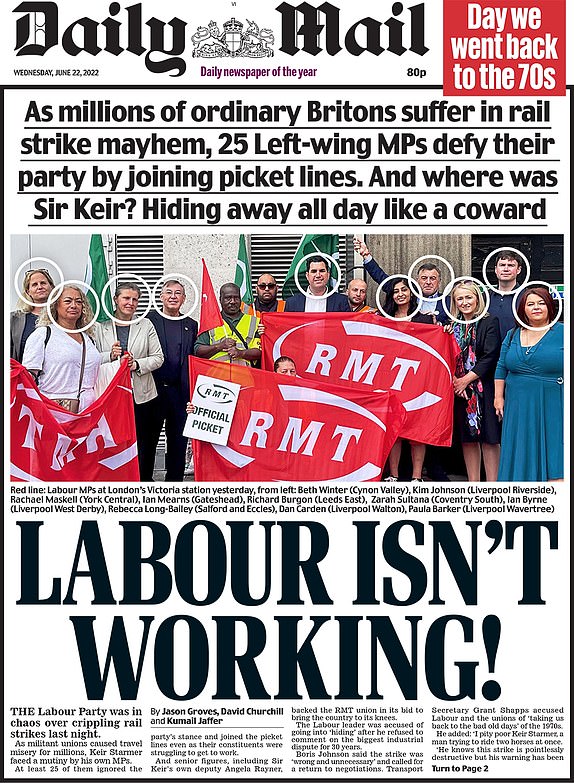 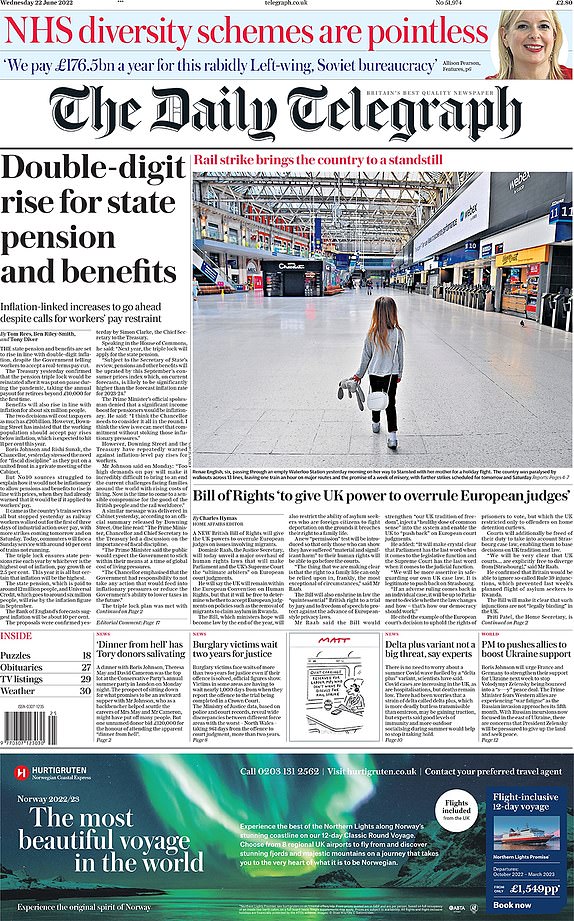 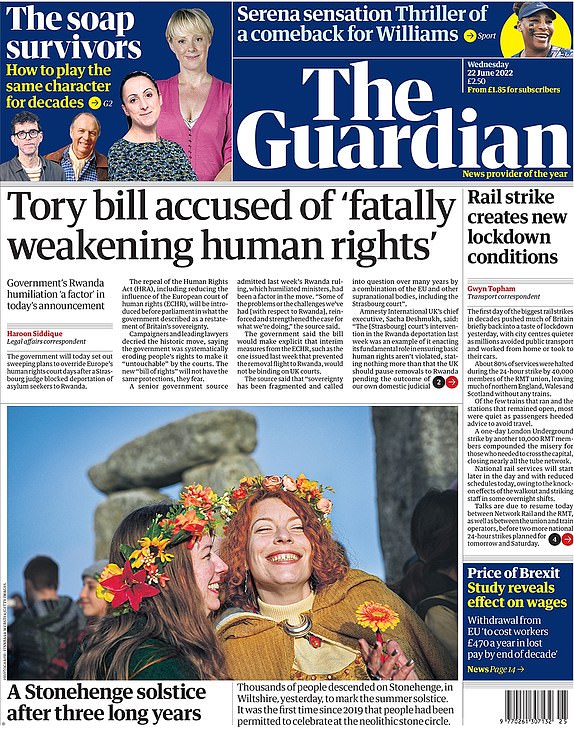 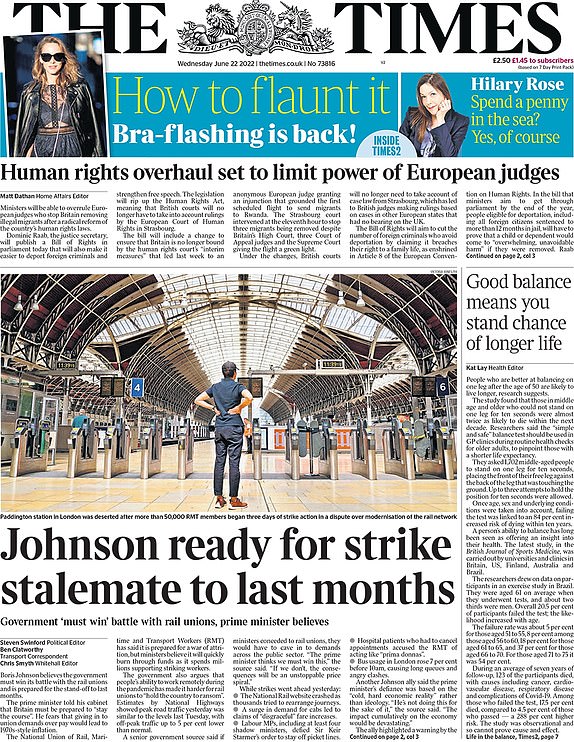 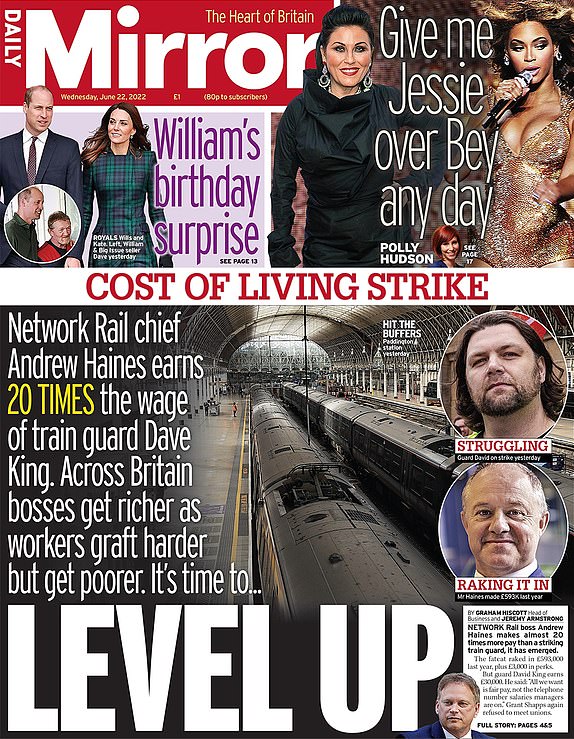 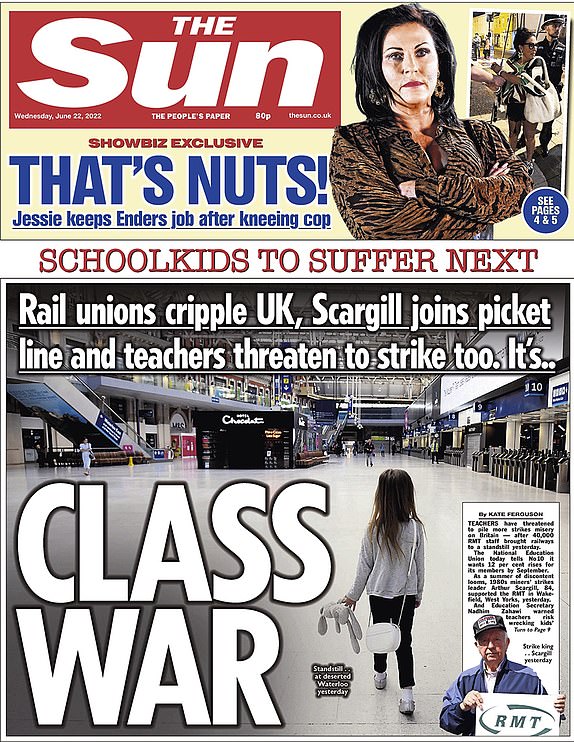 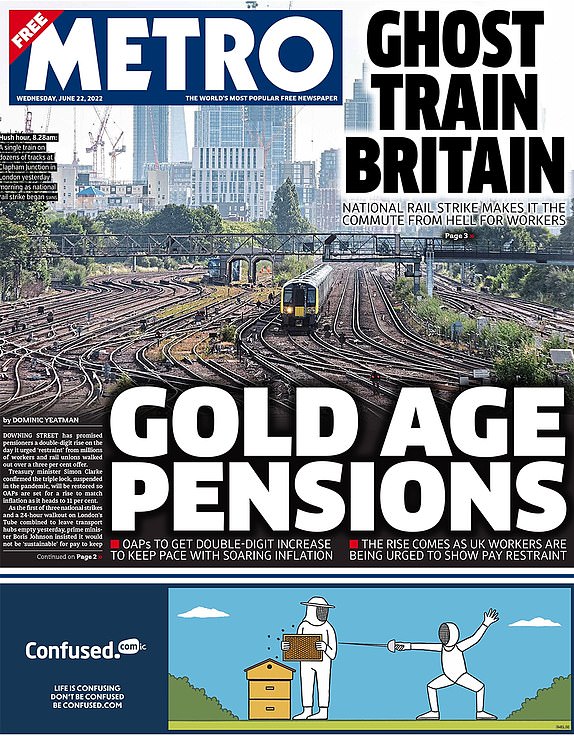 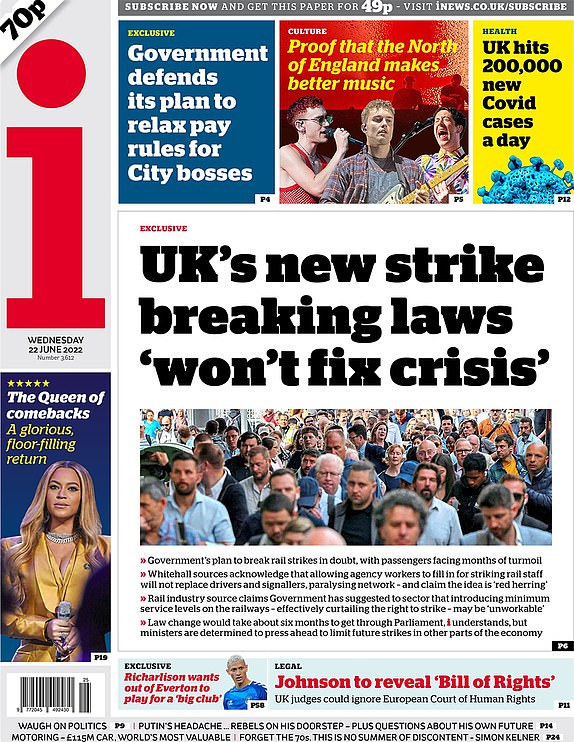 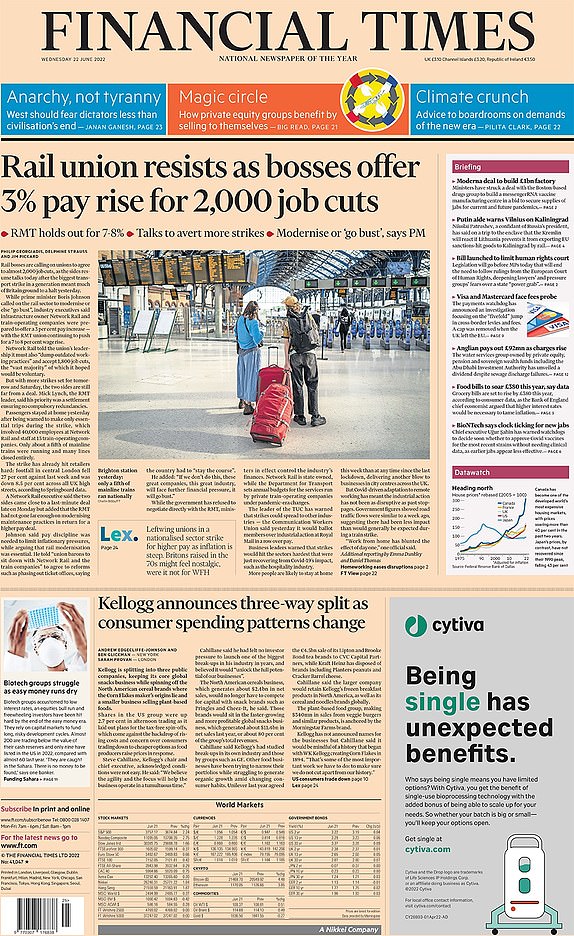 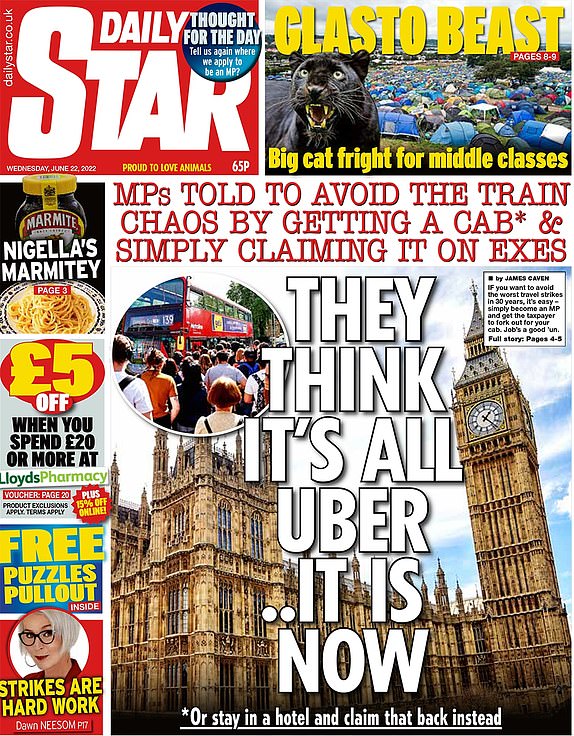 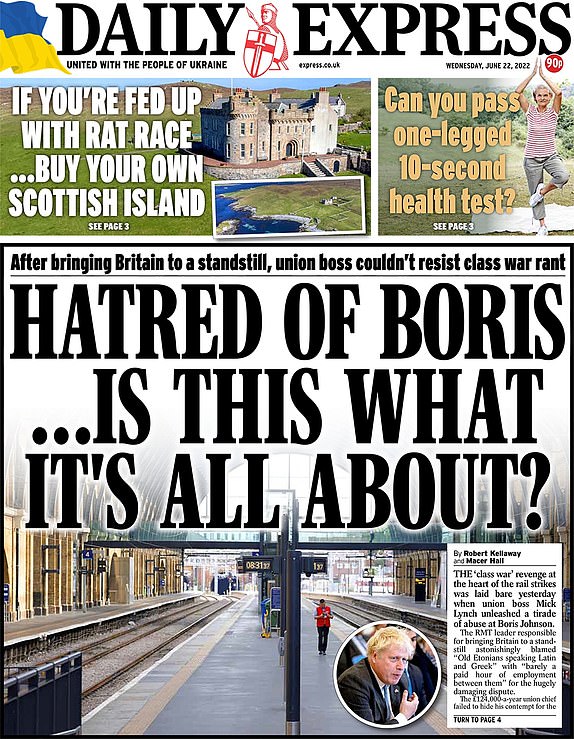 Only around 60 per cent of the 20,000 normal weekday services will be able to operate today. Walkouts by signallers and control room staff who would usually work overnight from last night into this morning meant trains left depots later than normal, delaying the start of services.

The start of services is expected to take up to four hours in some locations. But in London, services will increase quickly as trains do not have to travel long distances from depots to stations.

Network Rail said that ‘even during the day the service will stay thinner’ than usual and some operators will wind down services slightly earlier than normal.

Northern Rail services, which were crippled by industrial action yesterday, are already facing other issues this morning after a fire next to the railway at Burnley Manchester Road meant trains are unable to run between Blackburn and Todmorden / Hebden Bridge.

Buses will replace trains between these stations. This will affect the route between Southport / Wigan Wallgate / Kirkby and Blackburn, and also between Blackpool North and York / Bradford Interchange / Leeds.

c2c, which runs services between Essex and London, has now restarted running but warned that there will be fewer carriages than normal ‘due to more trains than usual needing maintenance’.

Transport for Wales, which saw almost its entire network suspended yesterday, has warned customers that services will start ‘later than usual today and are expected to be extremely busy’. They add: ‘Please do not travel unless necessary.’

Govia Thameslink Railway – which manages Thameslink, Southern, Great Northern and Gatwick Express routes – says it is running an ‘amended Sunday service’ today. There will be no trains before 7.15am today and some stations will have their first services around 8am.

National Rail had warned this morning that London Overground services between Richmond and South Acton would not run until 11am. But it has just issued an update, saying that the issue has been resolved. The first train from Richmond to South Acton and onto Stratford is due to depart the South West London hub at 7.57am.

CrossCountry has warned passengers that services will not begin any earlier than 7.45am today. The first train from Plymouth to Manchester Piccadilly will not run until 11.53am.

As a result of yesterday’s strike action, most National Rail services will not start running services until 7.30am.

Among them is Southeastern, which runs trains between London, Kent and East Sussex. It said staff will be ‘conducting essential electrical supply checks before allowing services to run, especially in the East Kent area’.

Three rail operators ran no service yesterday due to the strike – Gatwick Express, Caledonian Sleeper and Merseyrail. The latter has just reminded customers that there ‘may be a knock on affect to some services today’ and rail replacement buses will run until 7am.

As it stands, there is an Elizabeth line service operating between Paddington and Abbey Wood only.

Services between Liverpool Street and Shenfield, and between Paddington and Reading / Heathrow Airport are set to resume from around 7am due to the knock-on effect of yesterday’s strike action.

Transport for London is advising passengers to ‘avoid travelling before mid-morning if possible’.

The service on all London Overground lines is not expected to resume until at least 8am today. Transport for London has also advised: ‘Please avoid travelling before mid-morning if possible.’

In addition to this, National Rail has just announced that there will be no trains between Richmond and South Acton on the Overground until around 11am.

It said: ‘Following yesterday’s industrial action, some trains were unable to be prepared for this mornings service and as a result, trains may be suspended between Richmond and South Acton.’

Almost every London Underground line is still suspended this morning as a result of yesterday’s strike action by the RMT and Unite – which was separate to the national rail strike.

The only Tube line running any service as it stands is the Northern line, which is operating between East Finchley and High Barnet / Mill Hill East and between Golders Green and Edgware only. No service is on the rest of the line.

Most Underground services are not expected to start running until 8am this morning, although there should be a full service by the afternoon.

Good morning and welcome to MailOnline’s liveblog as we look at the impact of the national rail strike launched yesterday. While today isn’t strictly a strike day, there will be a severe knock-on impact of the industrial action both yesterday and tomorrow. Follow us throughout today for live updates.