With the focus sharply on the U.S. Presidential and Senate election results on Tuesday, it’s easy to forget that power of the country’s lower chamber of Congress — the House of Representatives — is also up for grabs.

The 435 seats of the House are contested every two years, meaning its members are on the ballot on Tuesday, too.

Here’s a look at what’s going on as time ticks down before polls close.

During the 2016 election, the Republicans won 241 seats to secure the House for the party. 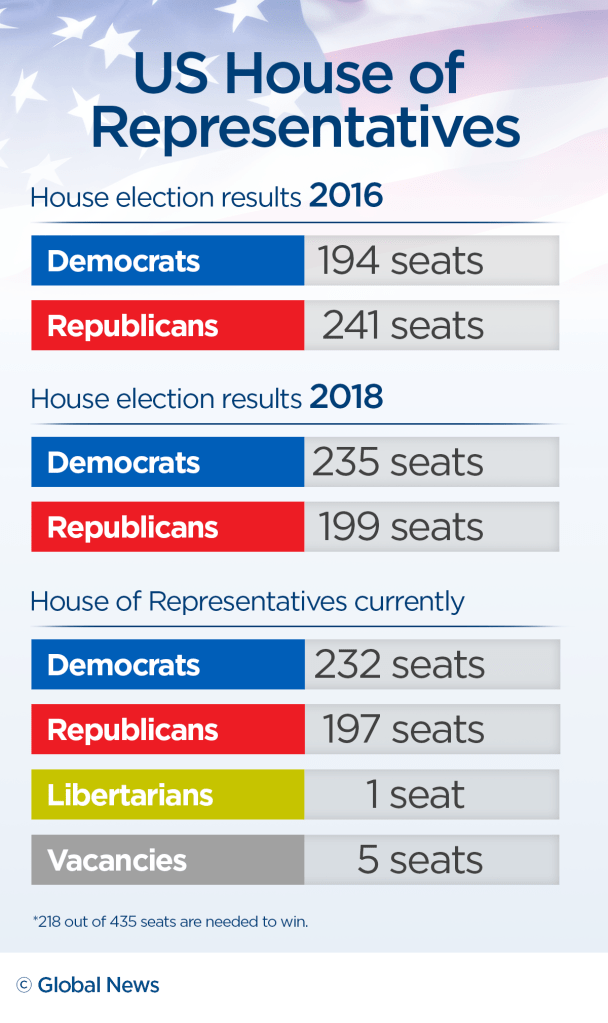 The victory marked a stunning 41-seat increase in what has been called the “blue wave.”

The Republican Party, which had held House since 2011, amassed 199 seats during the 2018 midterms.

The Democratic victory meant California Rep. Nancy Pelosi once again became Speaker — a job she previously held from 2007 to 2011.

Former Speaker of the House, Republican Paul Ryan, ultimately retired in January 2019, saying he did not intend to run for re-election in 2020 and wanted to spend more time with his family.

Currently, the House is comprised of 232 Democrats and 197 Republicans.

There is also one Libertarian — Michigan Rep. Justin Amash — and five vacancies.

This year, the Democrats are looking to expand their majority in the House.

They are also hoping their colleagues in the Senate are able to turn enough seats blue in order to take control and help pass legislation through both chambers of Congress more easily.

The last two years has seen the GOP-held Senate stall or vote down a number of Democratic bills.

Meanwhile, the Republicans are seeking to flip enough seats in the House to take control.

Amash’s seat is one they are hoping to regain on Tuesday.

However, experts say it is unlikely the Republicans will be able to flip enough seats on Tuesday.

In fact, by Monday evening, both political analysis websites Decision Desk HQ and FiveThirtyEight projected the Democrats would remain in control of the House of Representatives.

The latest projection from FiveThirtyEight said the Democrats have an 80 per cent chance of winning between 225 and 254 seats in the House.

According to Decision Desk HQ, the Democrats have a 98.3 per cent chance of keeping majority rule.

While Pelosi serves as Speaker of the House of Representatives, Maryland Rep. Steny Hoyer represents Democrats on the floor as Majority Leader.

Meanwhile, on the Republican side, Kevin McCarthy represents Republicans on the House floor as Minority leader with Steve Scalise serving as the party’s Whip.

According to FiveThirtyEight, each of the House’s top Democrats and Republicans are expected to maintain their seats on Tuesday.

The members, nicknamed “The Squad,” were elected during the 2018 midterms. Each have served on heavy-hitting committees, including those that oversee the financial industry, foreign affairs and the federal budget during their first two years as members of the House.

However, their progressive politics have made them the target of many Republicans, including U.S. President Donald Trump, who has launched repeated attacks.

Last year, the Republican president drew ire from the public after he wrote a tweet urging the four women to “go back” to where they came from, despite the fact that all are U.S. citizens.

Ocasio-Cortez, Pressley, Tlaib and Omar are each seeking re-election and are expected to maintain their seats on Tuesday.

The spotlight will also be on a number of members who made headlines during Trump’s impeachment hearings last year.

California Rep. Adam Schiff, who serves as the House Intelligence Committee Chair and Jerrold Nadler, House Judiciary Committee Chair, headed the proceedings in the House, outlining the case for impeaching the president.

Both men are vying to keep their seats and expected to be re-elected.

Meanwhile, California Rep. Devin Nunez, the top minority-party member of the House Intelligence Committee, who vehemently defended Trump during the hearings, is expected to maintain his seat.

Ohio Rep. Jim Jordan and Florida Rep. Matt Gaetz also made headlines for their questioning of witnesses during the impeachment hearings.

Both men are expected to win their seats for the Republicans on Tuesday, too.

— With a file from Reuters