Birmingham, Alabama: An apparent tornado slammed into an Alabama neighbourhood, shattering more than a dozen homes on Tuesday (Wednesday AEDT) while people were hunkered down inside because of the coronavirus outbreak, as storms caused damage from Mississippi to Georgia. 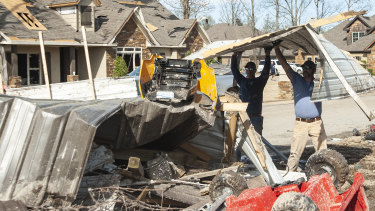 The aftermath of a tornado in Arkansas days ago. Credit:AP

Near the Alabama-Georgia line in Eufaula, a midday twister pulled the roofs off homes in a neighbourhood near the Country Club of Alabama. The area was left littered with pieces of about 15 houses and trees, but Mayor Jack Tibbs said only one minor injury was reported.

"I was really expecting it to be worse with the coronavirus with people at home, but it wasn't," Tibbs said in a telephone interview.

Tibbs said there was "no doubt" a twister was to blame based on the severity of the damage, and forecasters said photos and radar showed a tornado in the area at the time.

"The dispatchers are still busy answering all the calls coming in," she said.

Multiple trees were down across central Alabama, including Birmingham's southern suburbs. A barn was destroyed in rural east Alabama, the weather service reported, and video showed debris swirling around a tornado on the ground near the city airport in Troy.

More than 50,000 homes and businesses were without electricity in Alabama, Georgia and Mississippi, where the weather service said winds up to 97 km/h were possible.

Forecasters issued a series of tornado warnings and a tornado watch as storms moved eastward toward the Atlanta area. No injuries or touchdowns were confirmed, but the weather service said the threat would continue through late afternoon.