Hong Kong: A calligraphy scroll by former Chinese leader Mao Zedong estimated to be worth millions of dollars was cut in half after it was stolen last month in a high-profile burglary in Hong Kong, police said.

The scroll was found damaged when police arrested a 49-year-old man in late September on suspicion of handling stolen property. The South China Morning Post, quoting an unidentified police source, reported that the scroll was cut in two by a buyer who had purchased it for 500 Hong Kong dollars ($90) and had believed the scroll to be counterfeit. 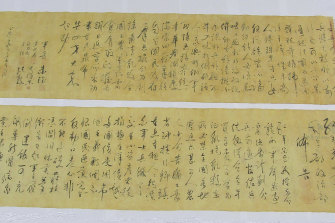 The two halves of a calligraphy scroll by former Chinese leader Mao Zedong estimated to be worth about $420 million. Credit:HK Police/AP

“According to our investigation, someone thought that the calligraphy was too long,” Tony Ho, senior superintendent of the police Organised Crime and Triad Bureau, said at a news conference Tuesday. “It was difficult to show it, to display it, and that’s why it was cut in half.”

Police said the scroll was part of a multimillion-dollar theft by three burglars from collector Fu Chunxiao’s apartment in September. Fu, who is well known for his collection of stamps and revolutionary art, was in mainland China at the time of the burglary and has not been in Hong Kong since January because of the coronavirus pandemic.

The burglars took 24,000 Chinese postage stamps, 10 coins and seven calligraphy scrolls from Fu’s apartment, where he stored his collections.

Fu estimated that the Mao calligraphy was worth about $US300 million ($420 million) and that the theft totalled about $US645 million. No independent appraisals of the collections were available.

Although some stolen items have been found, the 24,000 stamps and six other calligraphy scrolls have not been recovered, police said.