Washington: A teenager identified as Kyle Rittenhouse was arrested and charged with homicide on Wednesday after gunfire killed two people and wounded a third during protests over the police shooting of a Black man in Kenosha, Wisconsin, court officials said. 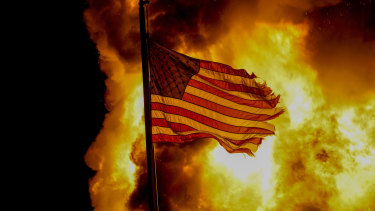 A flag flies over a department of corrections building ablaze during protests in Kenosha, Wisconsin. Credit:AP

The lakeside city been rocked by civil unrest since Sunday, when police shot Jacob Blake, 29, in the back at close range. That incident, captured on video, has reignited protests over racism and police use of force in the United States.

Rittenhouse, 17, was arrested on a warrant in Illinois and charged with first-degree intentional homicide in Kenosha, a Lake County court official said.

The third night of protests in the city of 100,000 between Milwaukee and Chicago erupted in gunfire shortly before midnight, prompting some elected officials to call for a reinforcement of National Guard troops or the deployment of federal law enforcement officers.

"TODAY, I will be sending federal law enforcement and the National Guard to Kenosha, WI to restore LAW and ORDER!" Trump wrote on Twitter, without elaborating. 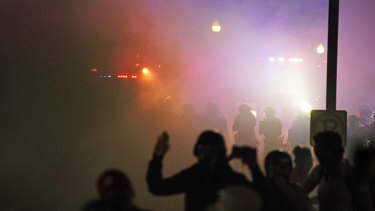 Police in riot gear clear the area in front of Kenosha County Courthouse during clashes with protesters.Credit:AP

Video on social media showed the shooter was a white man with a rifle.

Rittenhouse's now-deleted Facebook page shows him posing with another young man, both of them holding rifles. The photo is encircled by a Blue Lives Matter badge in support of police.