The UK is riddled with severe weather warnings ahead of Storm Dennis, with the Met Office warning of “danger to life” as the “perfect storm” builds. Now, the Environment Agency has issued a comprehensive timeline of when residents should expect to see the worst of the flooding.

John Curtin, Executive Director of Flood & Coastal Risk Management, Environment Agency, has issued the flood impact timeline below to help residents prepare for the worst of the hit.

He wrote: “Flood risk will be in phases and across different parts of the Country – upland fast responding catchments first then down into the larger rivers later.”

According to a graphic he tweeted, northern and northwest parts of England including Cumbria, Lancashire, Greater Manchester, and Yorkshire will be hit by heavy rains and flooding first from Saturday afternoon well into Monday afternoon.

They will be followed by parts of London and southwest England, which will see larger flood impacts on Sunday. 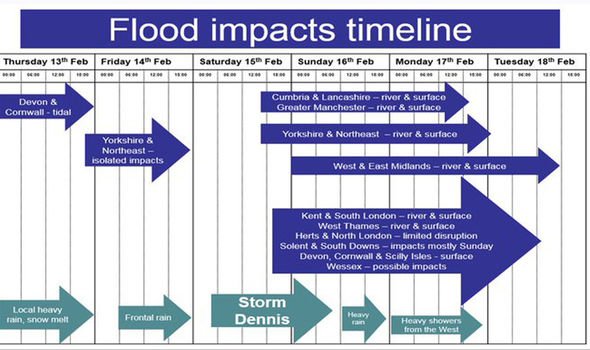 The west and east Midlands is also at risk for flooding from the early hours of Sunday and will extend right through into Tuesday afternoon.

Mr Curtin advised residents to sign up for the free flood warnings now, “before we reach these arrows” – sign up HERE.