Snoozing dog wakes up after smelling a strip of beef jerky

This dog in China had the most delicious nap by waking up to the smell of beef jerky.

Hilarious footage shows the French bulldog named Dou Dou enjoying a cosy afternoon snooze as its owner quietly approached the pet and put down the meat strip in front of the snoring canine.

Within seconds, the dog suddenly opened its eyes while licking its lips after smelling its favourite snack, the Chinese pet owner, Mr Fan, told MailOnline. 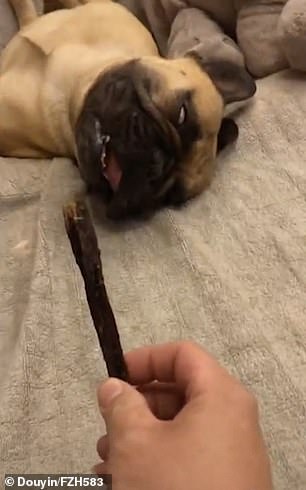 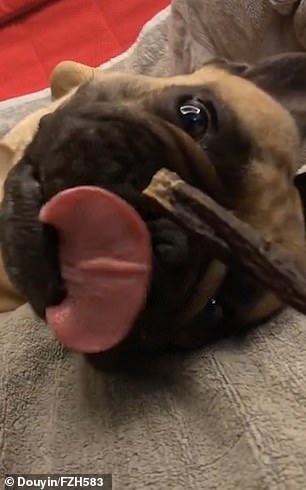 Mr Fan captured Dou Dou’s adorable reaction on camera at his home in Shanghai on Tuesday afternoon when the French bulldog was taking a nap.

In the trending video, the family canine, seemingly in a deep sleep, can be heard snoring loudly while lying on the bed.

The Chinese owner, holding a strip of beef jerky, crept into the room before slowly putting the snack in front of Dou Dou’s nose.

Within seconds, the snoring dog started moving slightly, apparently sensing something delicious nearby.

As Mr Fan held the meat strip closer, Dou Dou suddenly woke up with its eyes wide open and began licking its lips while looking at the beef. 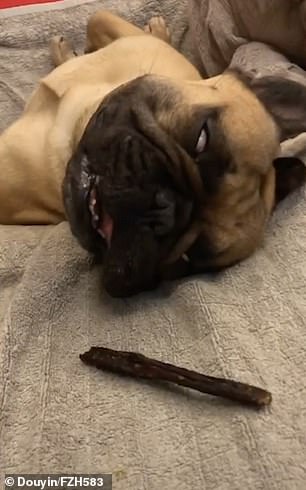 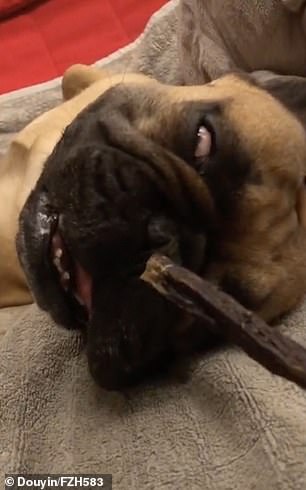 The Chinese pet owner, Mr Fan, captured Dou Dou’s adorable reaction on his phone at his home in Shanghai on Tuesday afternoon when the French bulldog was taking a nap

Amused by the pet’s reaction, the owner burst into laughter while tapping the canine’s nose with the beef strip.

The footage also entertained hundreds of thousands of netizens after Mr Fan shared it on Chinese TikTok-like Douyin yesterday.

One viewer wrote: ‘The dog smelled the beef jerky first with its eyes while still snoring with its mouth! Definitely a foodie.’

Another web user joked: ‘This is how I look like when I’m sleeping after having a couple of drinks!’

While Dou Dou woke up to its favourite snack, this golden retriever called ‘Weasel’ had slightly worse luck with its afternoon nap.

Weasel was enjoying a late morning snooze when she had a big stretch before suddenly rolling over and falling off the couch at her home in China.

After waking up, the sleepy-eyed canine remained still for a few seconds while looking around, seemingly puzzled by what had just happened.