The piece is part of a series featuring writers’ reflections on their lessons from months in lockdown.

There's an advertisement for yoghurt on Hoddle Street. It's one of those big obnoxious billboards that says something like SILKY SMOOTH DECADENT CREAMY SINFUL SPOIL YOURSELF.

I should know the exact wording, since I ride past it on my way to the ABC each morning. But in true non-commercial spirit I can't even tell you the brand name. 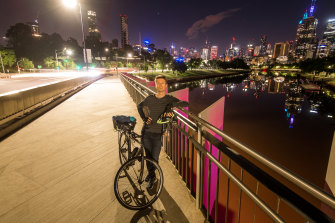 Sammy J says lockdown taught him that even as a comedian, he needed to show his sincere side.Credit:Justin McManus

Still, I've felt sorry for that company this year. They must have been pretty chuffed to secure such a prominent location for their ad.

How could they have known that the road would soon be purged of traffic, and one of their few prospective customers would be a bird-like man puffing past at 4am?

The CBD tells a similar tale of wasted investment. It's particularly brutal seeing all the Comedy Festival ads plastered over empty trams. I was one of many performers with a show planned in April.

After rescheduling, then rescheduling again, I finally pulled the pin when our second lockdown arrived.

Despite that disappointment, I can't complain about work during this pandemic. As a non-essential part of an essential institution I've had the huge fortune of a regular job, allowing me the freedom to leave home and present a radio show every morning.

So I haven't experienced the worst of lockdown, and I can't speak to the pain of those who have.

But I've still learnt some things during this weird time. I always thought doing radio would be like doing the comedy festival – prepare, rehearse, perform.

In practice, you can't "perform" for two and a half hours every day. Particularly at the crack of dawn after half a banana and an instant coffee.

At some point you have to be yourself, be vulnerable, and – in perhaps the cruellest blow of all for a comedian – be sincere.

Don't get me wrong; I've still worn a mankini in the studio and obnoxiously played musical theatre songs over Mick Malthouse as he tries to give me footy tips.

But at other times I've had to put stupidity aside and chat to people who are struggling, people whose families are far away, and people who – like all of us – still don't know how to process this dumpster fire of a year.

Because when we couldn't get together in person, radio helped us hold on to a sense of community. I'll be forever grateful that I was part of that community this year, and I suspect it meant more to me than the listeners much of the time. See that? I was sincere just then. You wouldn't have heard that in 2019, I guarantee it.

I can also happily report that after a lifetime of peak-hour gridlock frustration, cycling down an empty Hoddle Street is quite cathartic. And now that we're finally easing ourselves out of lockdown, l might just treat myself to some gourmet yoghurt.