While Britain’s politicians bicker over schools after the government shelved its plans for all primary school pupils to return this month, many other countries are already well ahead in resuming lessons.

Switzerland and the Netherlands have both achieved what Britain hoped to do, sending all primary-age pupils back before the holidays – saying that the risk of younger children spreading coronavirus is low.

Spain and South Africa are among the countries where secondary schools have already started to re-open, while New Zealand has resumed a full timetable after abandoning almost all its lockdown restrictions.

Many countries including France and Japan are opening schools on a regional basis, with specific virus prevention measures left up to local governments or even individual schools.

Schools have become a political battleground in Britain where Labour leader Keir Starmer today accused Boris Johnson of ‘flailing around’ while millions of children missed out on their education.

But Mr Johnson raged that Sir Keir had been ‘flip-flopping’ over whether schools were safe to return or not and needed to speak to his ‘left-wing friends’ in the teaching unions.

Education Secretary Gavin Williamson admitted yesterday that the ‘ambition’ of getting all primary age children back in class for a month before the summer break has been ditched, just weeks after it was set.

Here is how some other countries have dealt with the situation… 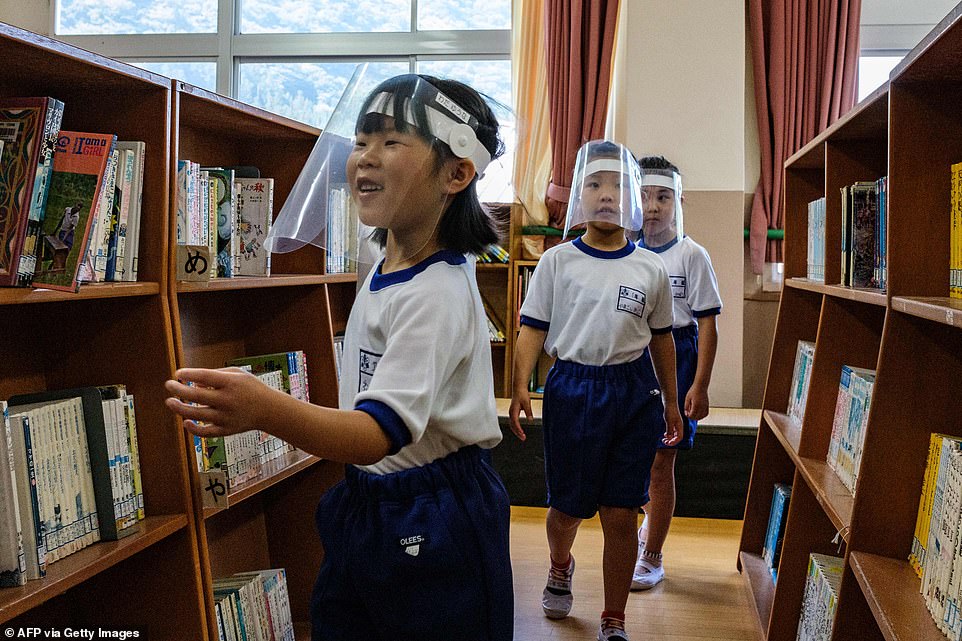 JAPAN: Young children wearing face shields look at books in the library of Kinugawa Elementary School in Nikko last week after the final states of emergency were lifted in Japan 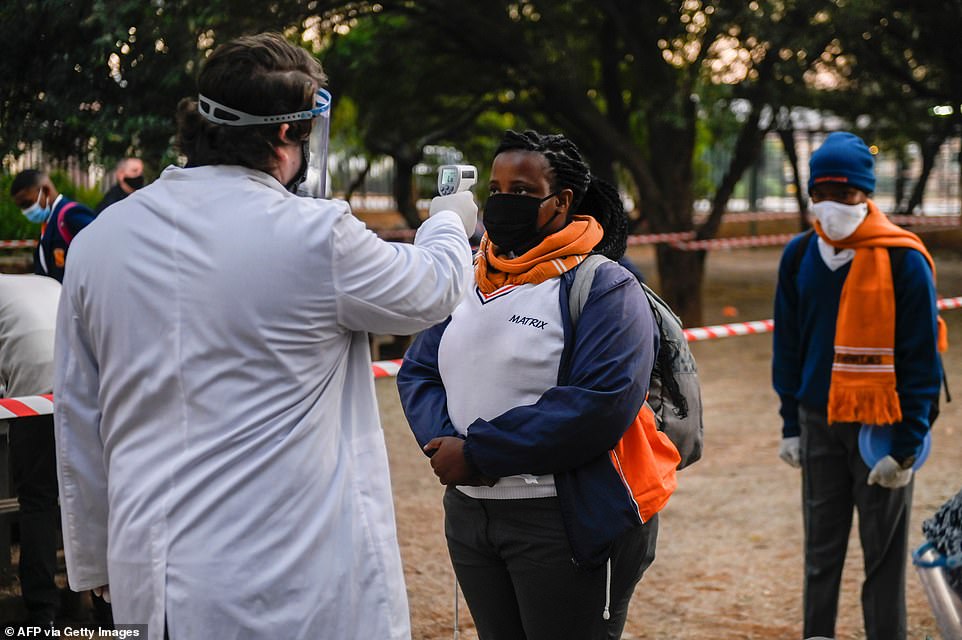 SOUTH AFRICA: A teacher checks the temperature of a pupil wearing a mask at the CR Swart High School in Pretoria on Monday as schools resumed after two and a half months of closure 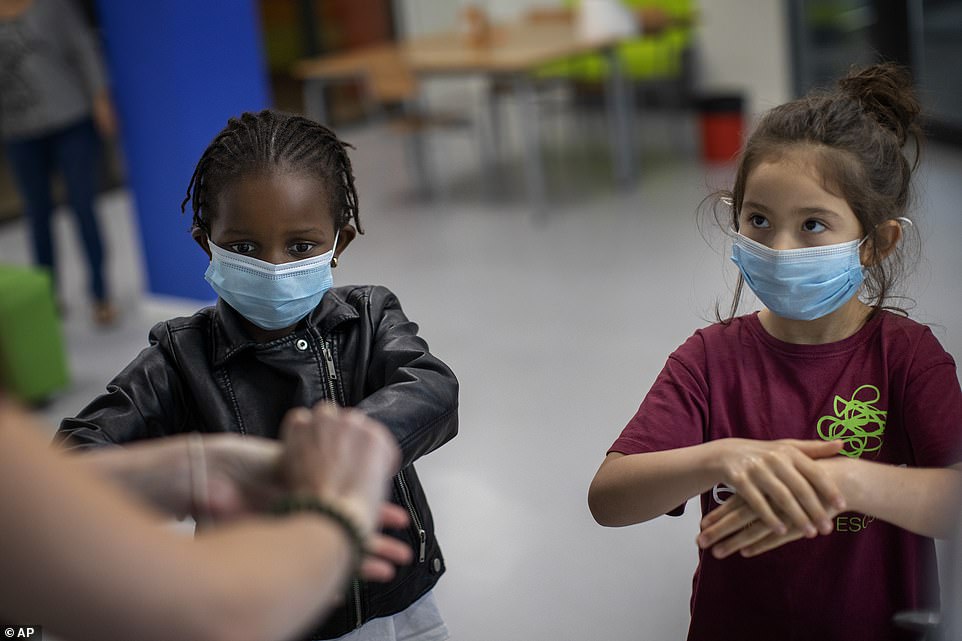 SPAIN: Oumou Salam Niang, six, and Andrea Celeste, seven, are shown how to clean their hands with sanitiser on the first day of lessons at a primary school in Barcelona on Monday 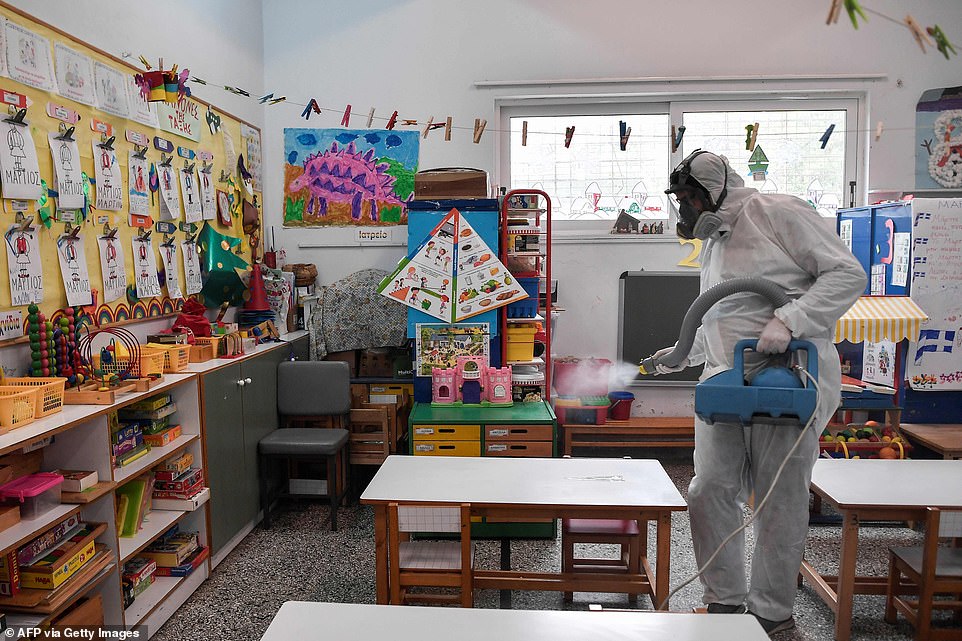 GREECE: A health worker wearing a full protective suit and visor disinfects the classroom of a kindergarten in Athens

Some German schools resumed lessons as early as the end of April, with the 16 state governments left to hammer out the details.

Classes have been split in half to enforce social distancing, meaning that some pupils are still at home much of the time – disrupting their parents’ working lives.

Dozens of parents protested outside the Berlin city hall on Tuesday to call for more decisive action, carrying placards including: ‘Open the schools or mum will lose her cool.’

The country has not suffered a second wave of cases since pupils started to return to classrooms, although the closely-watched R rate has sometimes drifted over the 1.0 threshold.

Germany has recorded 184,861 cases and 8,729 deaths, a far lower death rate than in Britain, Italy, Spain or France which has been attributed to the government’s effective handling of the crisis. 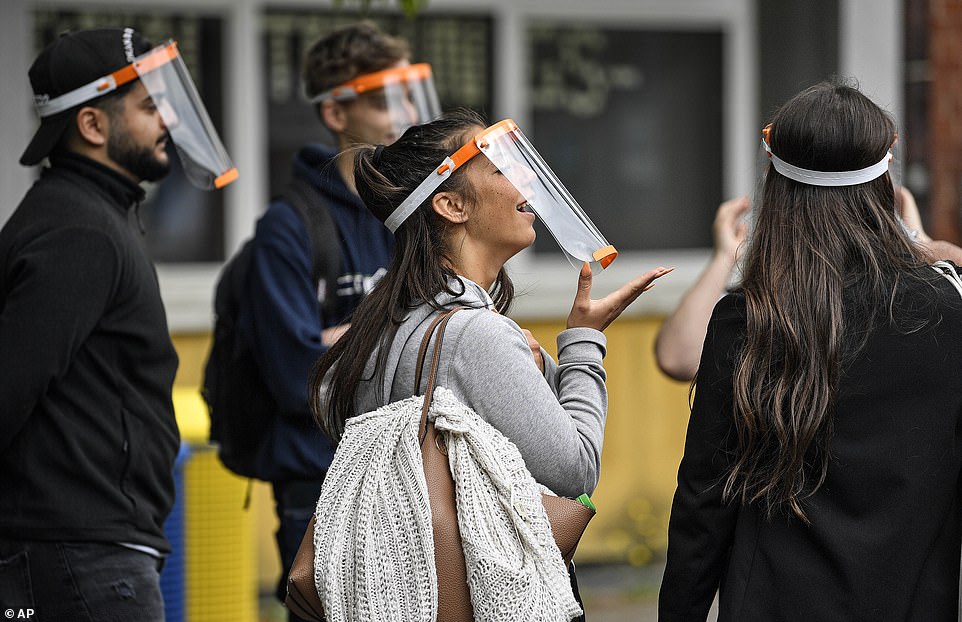 GERMANY: Pupils at a school in Cologne test out face shields after a local manufacturer donated around 140,000 of the visors for children in the city 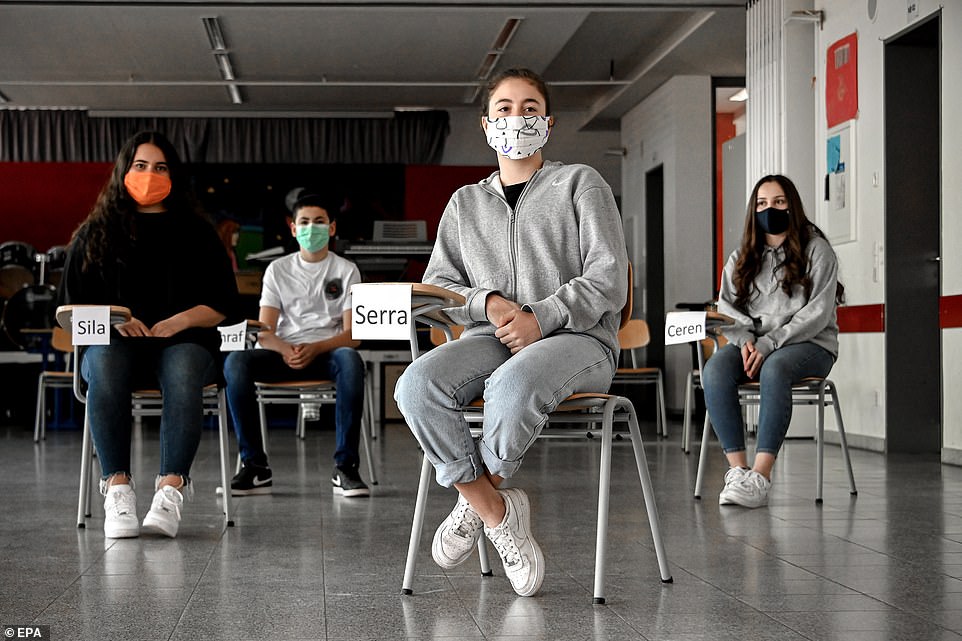 GERMANY: Pupils sit at a distance while wearing masks at Benzenberg secondary school in Düsseldorf.

France had an early scare when 70 new virus cases were linked to primary schools within the first week of lessons resuming last month.

A handful of schools were shut again, but primary schools are now open in most places and the government plans to speed up the return of secondary schools.

The exact timetable will be decided on a regional basis, with schools in France’s ‘green zones’ opening for more pupils than those in the harder-hit orange and red zones.

The government has imposed a limit of 15 pupils per classroom, or 10 in kindergartens, with the usual 3ft safety distance also in force.

However, universities remain shut and are not expected to return before the summer break.

France has seen 154,591 cases and 29,296 deaths, with the number of hospital deaths remaining consistently below 100 per day for the last three weeks. 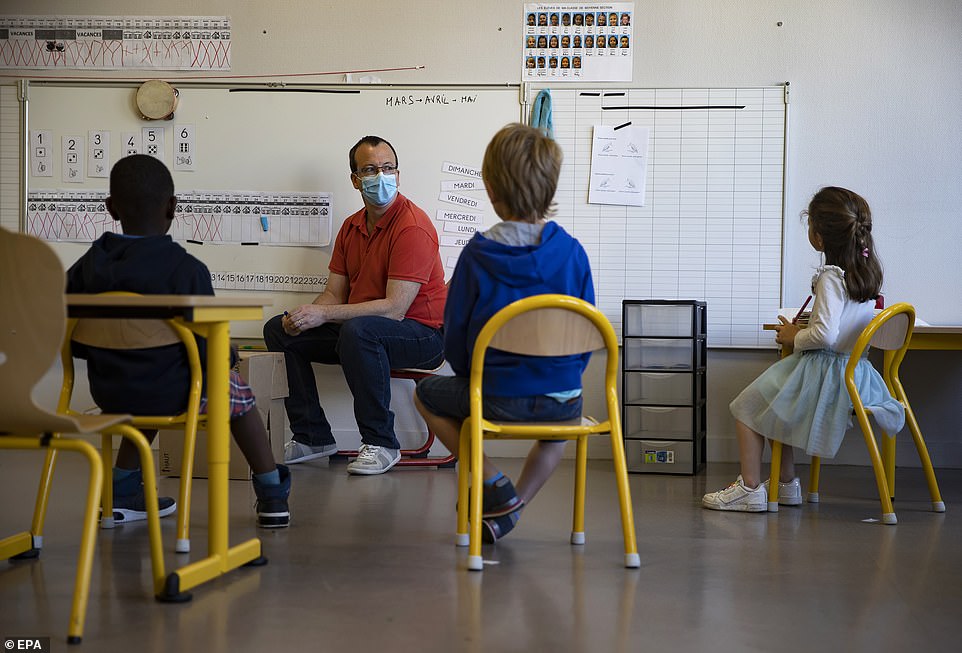 FRANCE: A few pupils sit on spaced-out chairs while their teacher wears a mask as he sits by a whiteboard at the Angela Davis kindergarten and elementary school in Montreuil 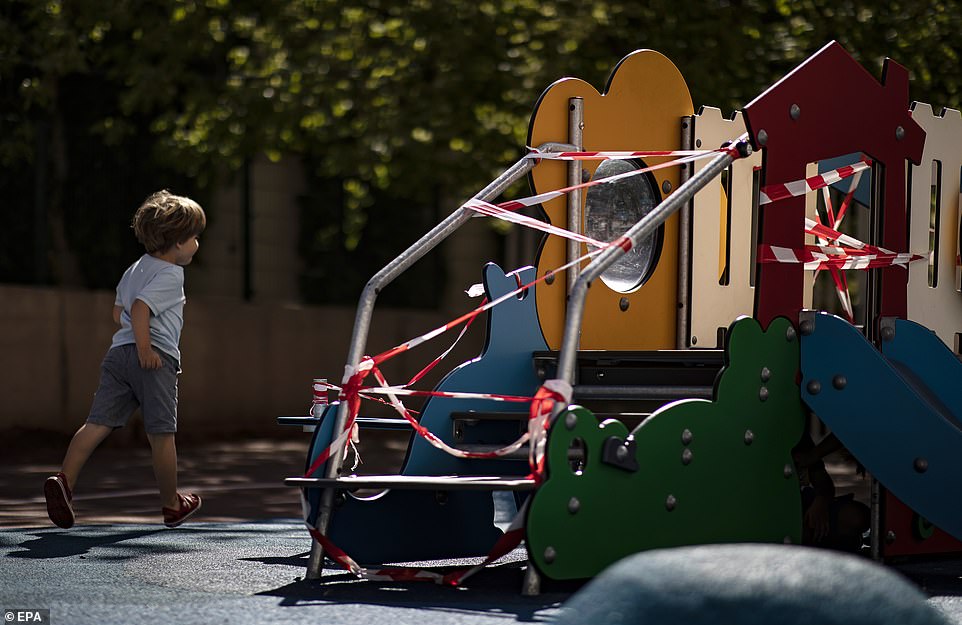 FRANCE: A child walks past a piece of playground apparatus which remains cordoned off at the school in Montreuil, France

Schools are gradually resuming classes in Japan, where the last of the regional states of emergency were lifted on May 25 – including in Tokyo.

Some pupils are wearing full-scale face shields, and others have complained that they cannot speak to their friends at lunchtime for fear of spreading the virus.

Staggered attendance means that some schools are only welcoming back a quarter of their pupils at one time in order to maintain social distancing.

Japan’s school year starts in April rather than September and the crisis has sparked debate about abandoning that policy to bring it in line with the Western academic year.

The Japanese health ministry has recorded 17,251 cases and 919 deaths, with only three recorded in the last 24 hours. 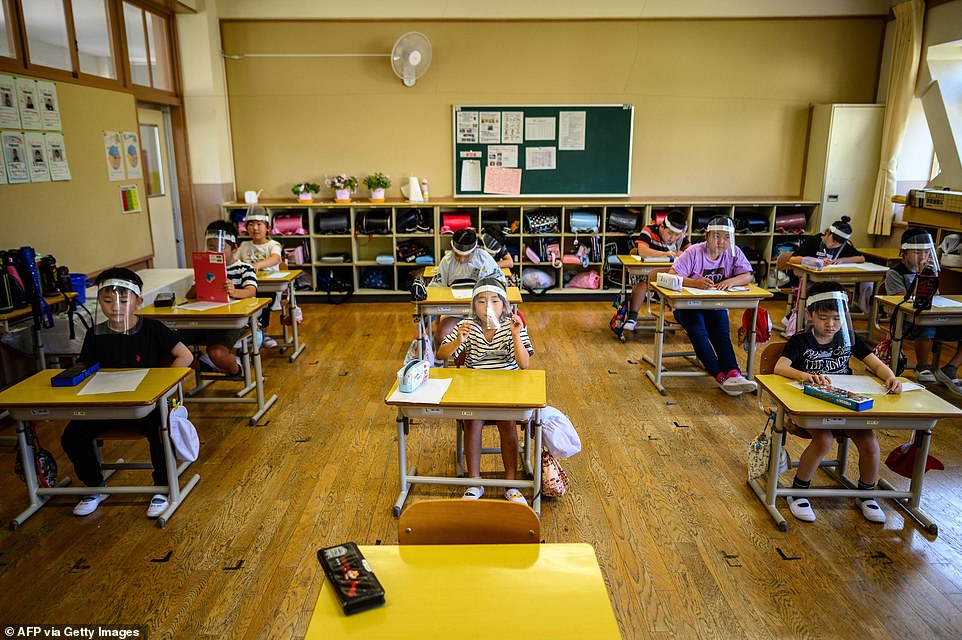 Children began returning to classrooms in South Africa on Monday, even as some parents worried not enough had been done to guard against infections.

The resumption of the school year had been delayed after unions urged staff to defy an order to return last week, saying schools did not have enough masks, gloves and other equipment.

Many government schools have no running water, making hand-washing nearly impossible. Others have been vandalised during the lockdown imposed by the government in March.

But the biggest union dropped its objections and education minister Angie Motshekga says 95 per cent of primary and secondary schools are now equipped to host classes.

Classes were limited to 20 pupils at some schools and teachers at one school in Johannesburg said they were handing out their own masks and gloves.

Initially, only pupils in grades 7 and 12 will return to class, with other years to be phased in gradually. South Africa has recorded 52,991 virus cases and 1,162 deaths. 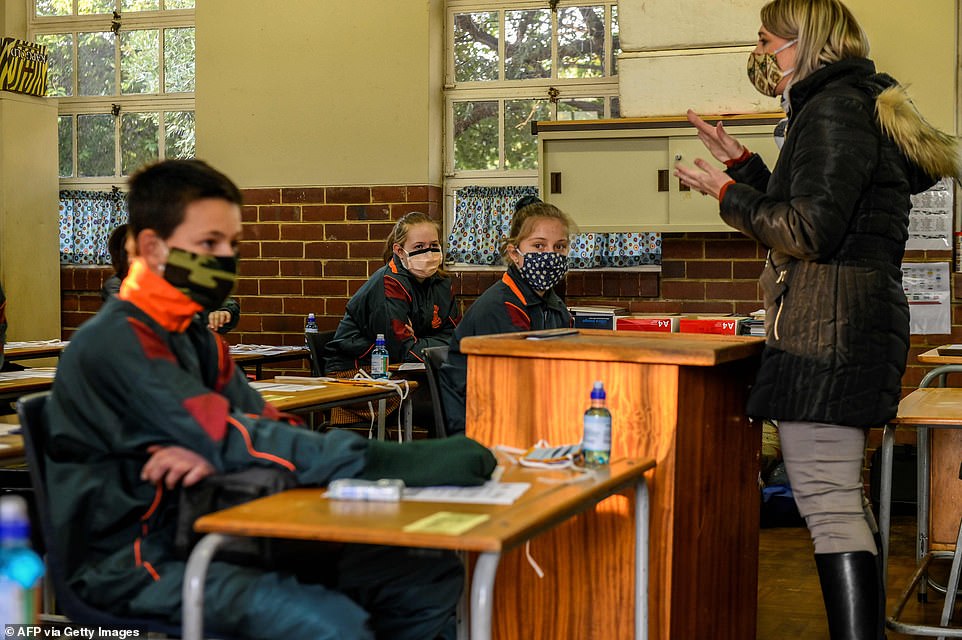 SOUTH AFRICA: Pupils wear face masks inside their classroom while looking at a coronavirus awareness video at the Totiusdal Primary School in Pretoria on Monday

Pupils returned to school in some areas of Spain on Monday in a further easing of the country’s coronavirus lockdown.

Spain’s initial lockdown had been among the strictest in the world for children, because exercise was not a valid excuse to leave the home.

But schools in the capital Madrid reopened for primary pupils on Monday and older children preparing for university entrance exams returned on Tuesday.

Children across the country were granted the right to play outside at any time of day, offering some relief after months spent indoors.

Spain has recorded 241,966 cases and 27,136 deaths, although its death figures have given rise to scepticism since a regular flood of new fatalities suddenly turned to a trickle when the methodology was changed. 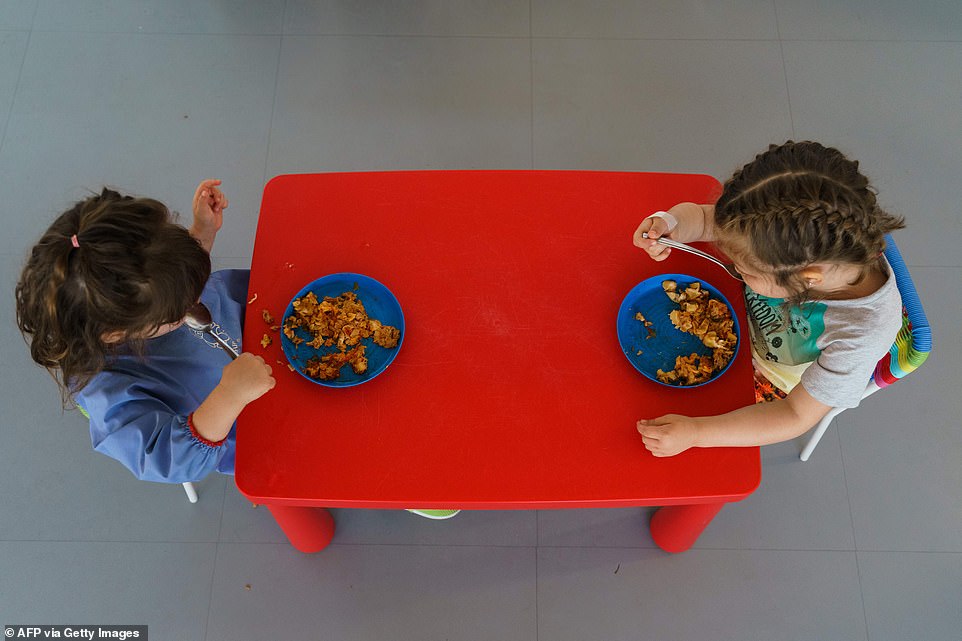 SPAIN: Children eat on opposite sides of a table – keeping a safety distance between them – at a pre-school in Valladolid today

The Dutch government says that ‘children can get the virus, but they have few symptoms and play no significant role in spreading the virus’, meaning all primary school pupils can return.

Schools are required to ensure a 5ft safety distance between its pupils, with students encouraged to walk or cycle if they live within five miles of the school.

Some primary schools had opened as early as May 11, but one in The Hague became the first to close again last week after two teachers tested positive for coronavirus.

The Dutch school’s two locations were closed, with about 500 students going back to online learning to minimise health risks.

The Netherlands has recorded 48,087 virus cases and 6,042 deaths, with only 11 new fatalities added in the latest daily update. 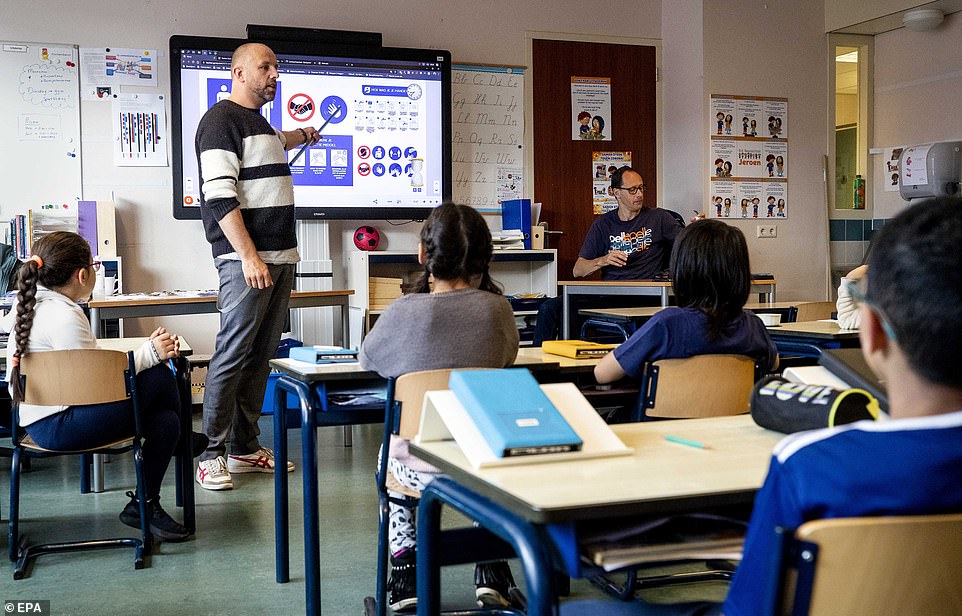 NETHERLANDS: A teacher tells his pupils about coronavirus safety measures at a classroom in The Hague, where primary schools have been allowed to re-open fully before the summer holidays 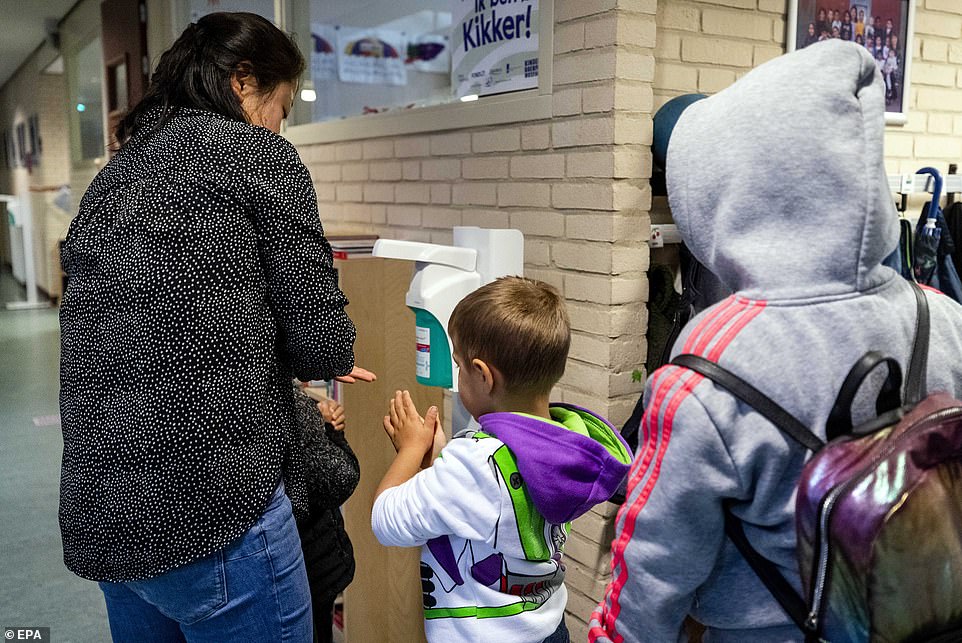 NETHERLANDS: Primary school students disinfect their hands at the start of the school day in The Hague on Monday

Finnish schools have already wrapped up for the summer holidays, which began on June 2 and will continue until August 12.

Before that, schools had already returned from lockdown in May and health officials said cases had continued to slow despite the resumption of lessons.

Pupils were advised to wear gloves to help protect them against the virus, while teachers were seen instructing them on how far apart they needed to stand while lining up for classes.

Finland has recorded only 7,040 cases and 324 deaths, far fewer than its neighbour Sweden which has never imposed a lockdown. 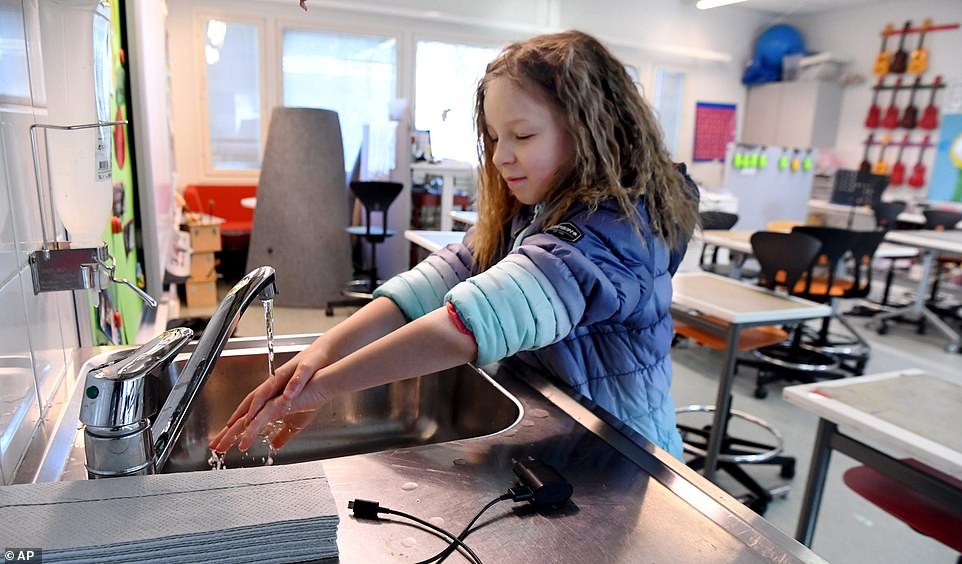 FINLAND: Melmi, a pupil at Lauttasaari elementary school, washes her hands ahead of a lesson at school in Helsinki

Some Greek schools have been back for several weeks, initially for pupils who were preparing for exams and then for younger children on June 1.

Class sizes have been cut to 15 in order to keep pupils 5ft apart, while breaks are being held separately for each class to avoid crowding in the playground.

Hand sanitizer is also being provided to each school with pupils encouraged to wash their hands frequently in order to keep infections down.

Greece has seen 3,058 cases and only 183 deaths, and is planning to restart its holiday season later this month to revive a tourism sector which accounts for a fifth of its economy. 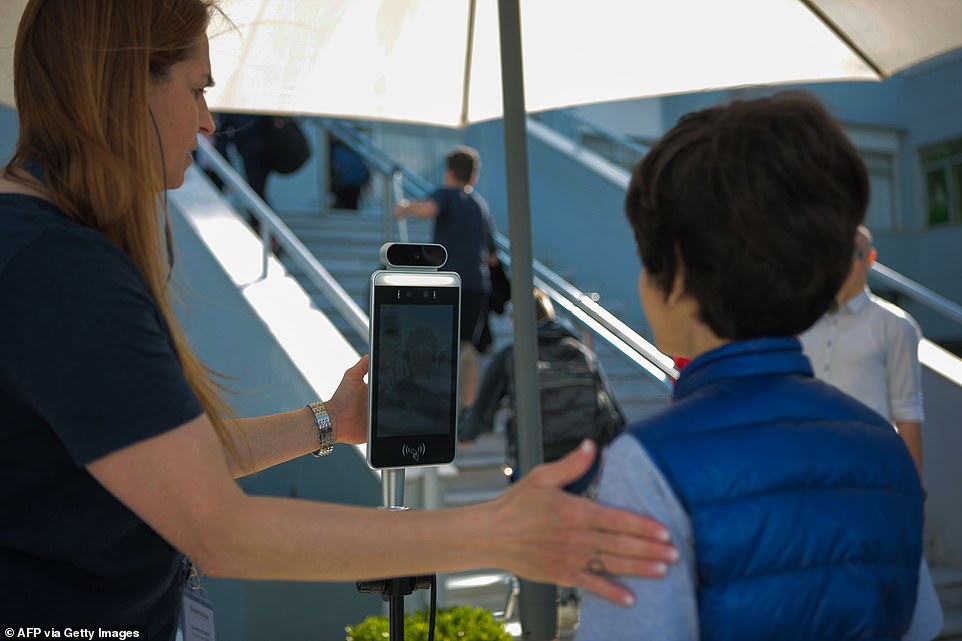 GREECE: A student stands in front of a temperature-checking device at the entrance of a primary school in Thessaloniki

Swiss schools are gradually returning, with all primary schools back already and older pupils returning on alternate days so that a safety distance of 40 square feet per person can be maintained.

Younger pupils are not subject to this restriction and the 15-person limit has been scrapped at primary schools, because Swiss authorities believe the risk of young children spreading the virus is small.

Sports lessons will be restricted, with contact sports such as football and handball not allowed for the time being. The current measures are in place until July 10.

School trips are also out of the question until the summer holidays, but graduation ceremonies can take place with appropriate health measures.

Switzerland has recorded 31,011 virus cases and 1,675 deaths, and is planning to re-open its borders to EU countries, EFTA members and Britain on June 15. 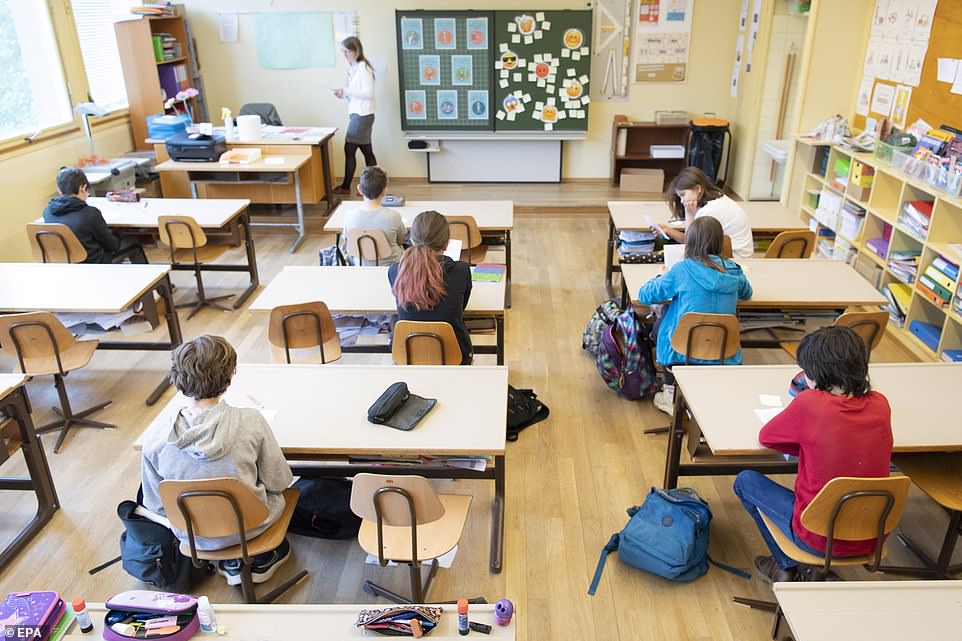 New Zealand has scrapped almost all its lockdown restrictions after seeing its number of active cases drop to zero, with no new cases discovered in the last 19 days.

Schools are fully open again and attendance is compulsory for everyone except youngsters with coronavirus symptoms or awaiting a test result.

Teachers are not allowed to check temperatures ‘as a matter of course’ because such screening is not necessary and is ‘not an overly effective tool’ to find virus cases, the government says.

New Zealand has seen only 1,504 ‘confirmed and probable’ cases with 22 deaths, and the government has seen its popularity surge because of its successful handling of the crisis. 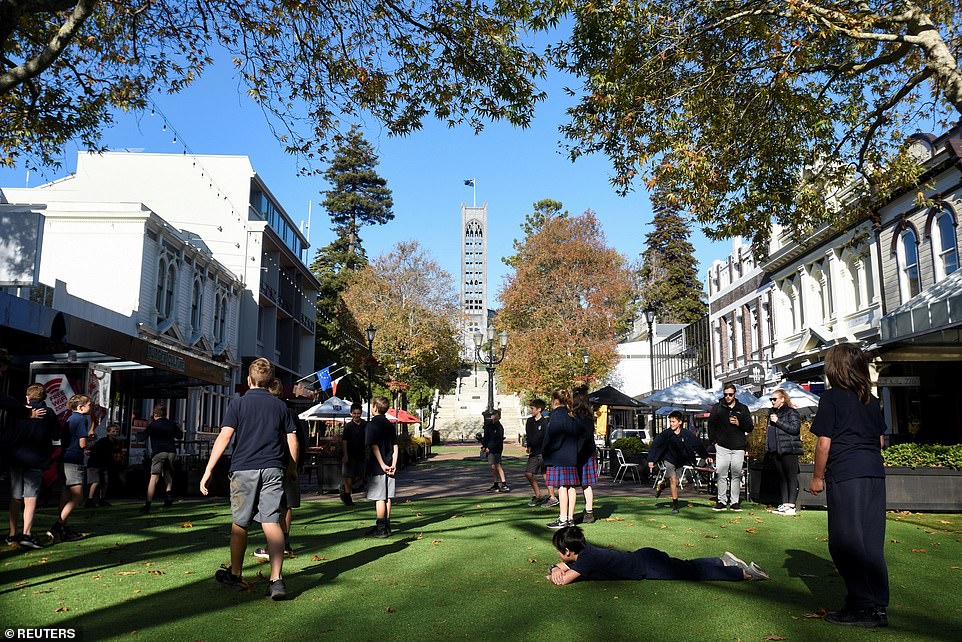 NEW ZEALAND: Children play at a school in Nelson yesterday on the first day of New Zealand’s restrictions being totally lifted