A thick layer of ‘sea snot’ is blighting the ocean near on of Turkey’s biggest cities – wrecking fishing nets, suffocating marine life and smothering corals on the seabed.

The gunk – officially known as marine mucilage – is a waste product of fat, carbs and protein created by tiny ocean-dwelling phytoplankton when they are placed under stress.

While the ‘snot’ is not typically a problem, when huge numbers of the plankton are crammed together it forms into thick, sticky webs that can cover many square miles of ocean and stretch up to 100ft underwater.

Experts believe this is what has happened in the waters near Istanbul, as the warming of the Marmara Sea due to climate change combines with nutrient-rich fertilisers and sewage being washed into the water, causing the plankton to multiply out of control. 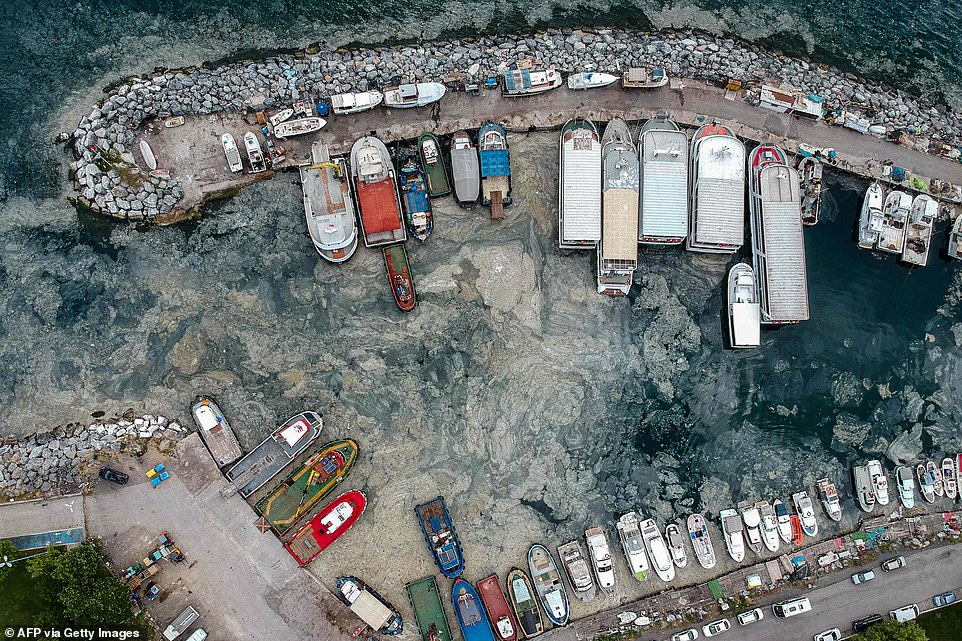 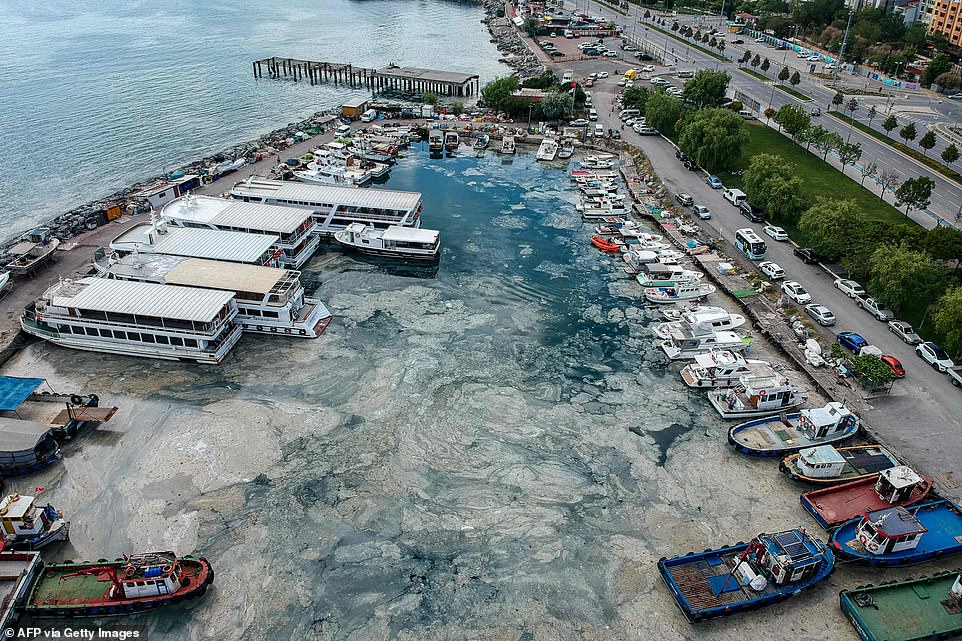 The plankton produce the slime – a mixture of fat, carbs and protein – when under stress. It is typically harmless, but if the plankton increase to sufficient numbers it can form large, sticky webs (pictured above) 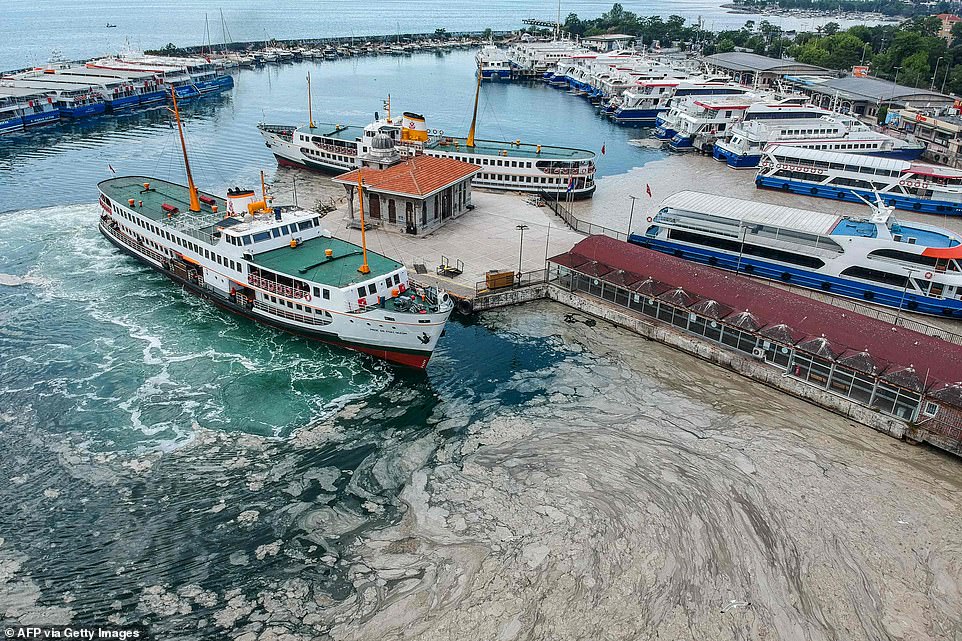 The ‘sea snot’ – officially known as marine mucilage – suffocates wildlife, wrecks havoc with fishing nets, and can clog the propellers of other boats which sail through it 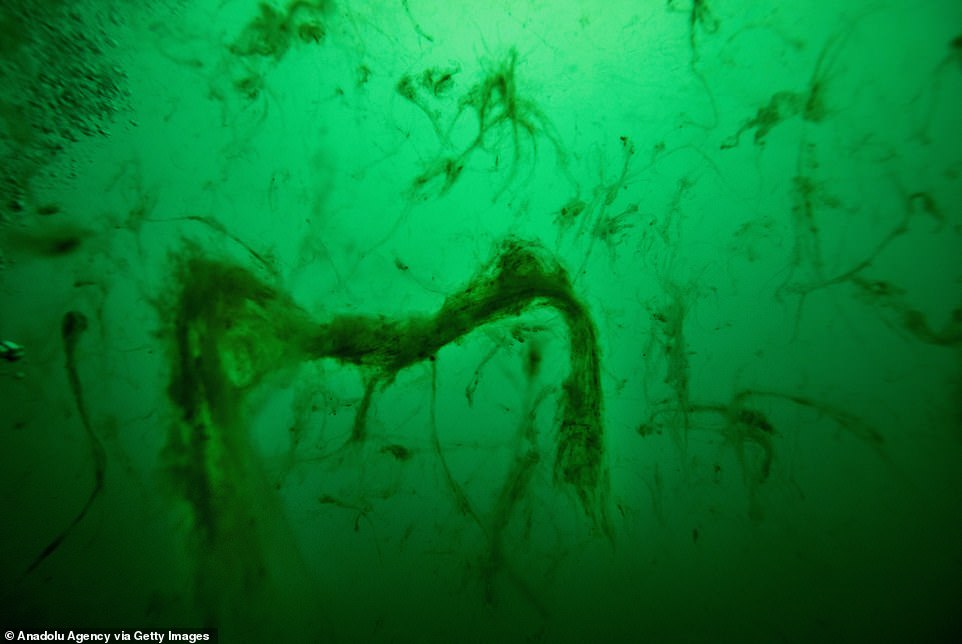 Mucilage is seen floating underwater off the coast near Istanbul, Turkey, amid warnings it can suffocate marine life 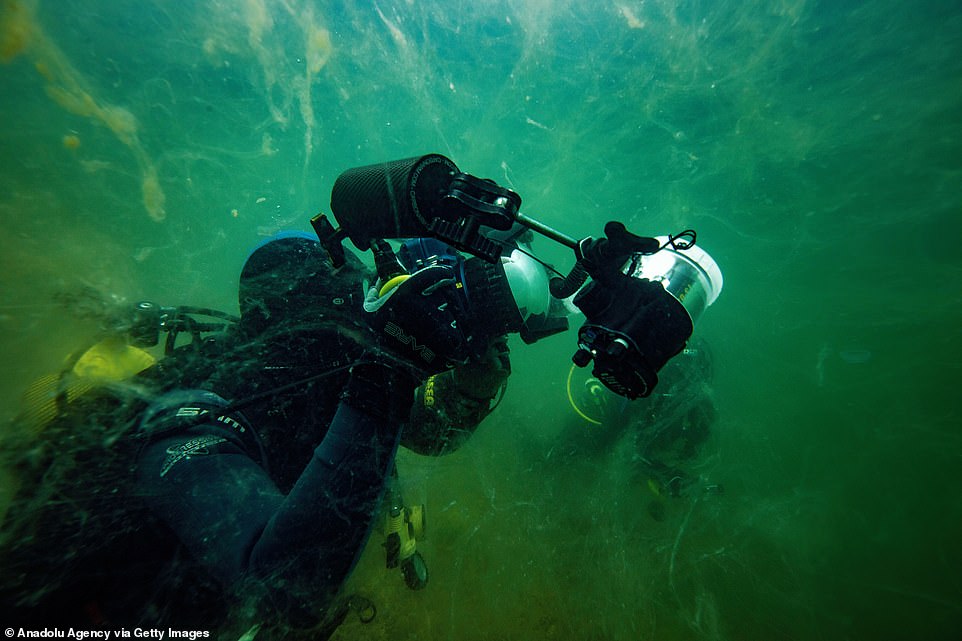 A diver swims through a thick blanket of sea snot that is clogging up the waters off the coast of Istanbul, Turkey 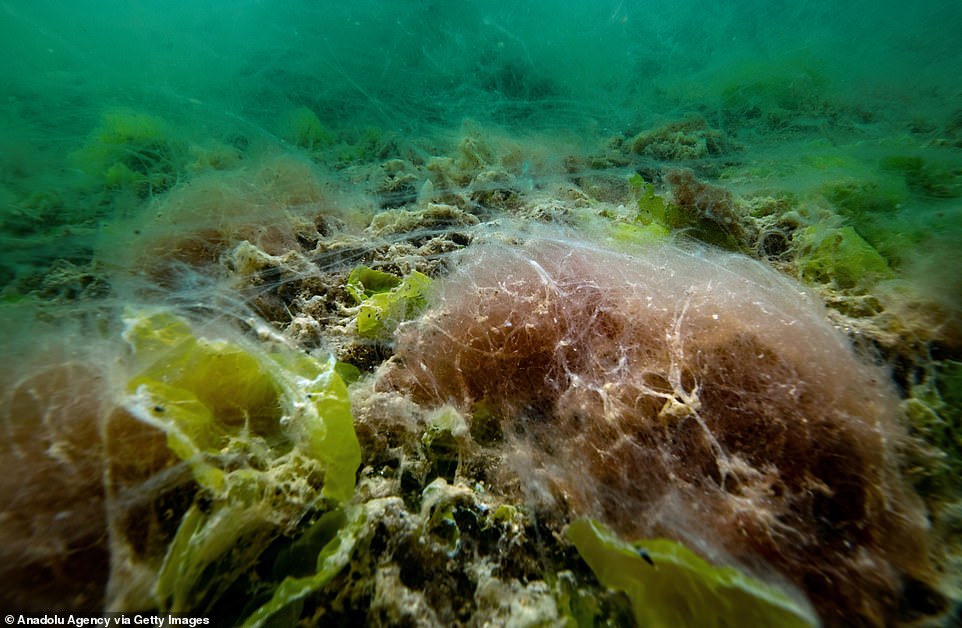 Sea snot can extend for up to 100ft underwater and blanket the ocean floor, suffocating corals and other marine life 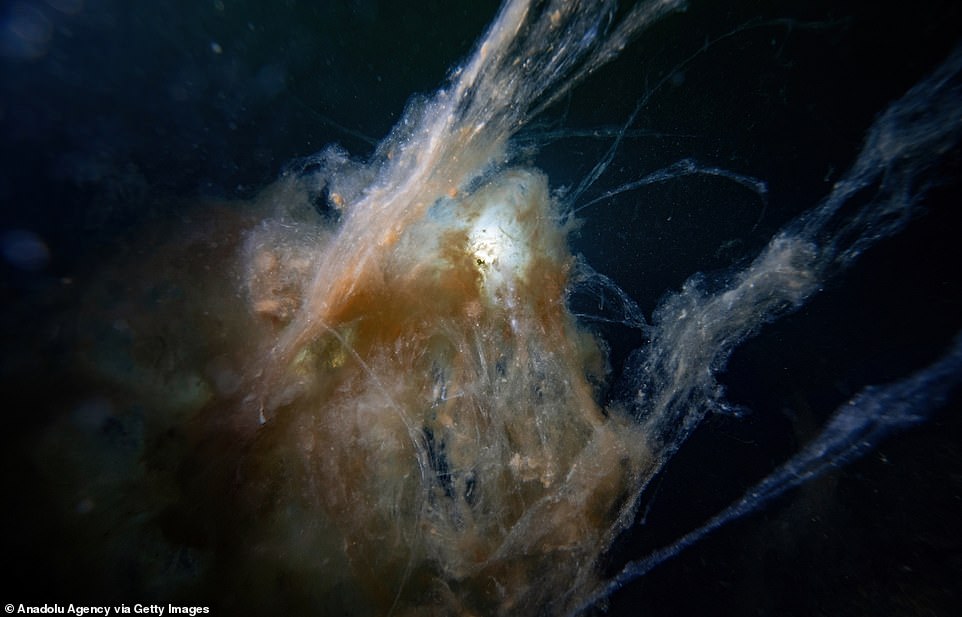 A thick blob of ‘sea snot’ is seen floating under the water off the coast of Istanbul, Turkey

The current bloom is thought to have begun in the Dardandelles Strait sometime around December last year, when marine researchers discovered a thick blanket of the slime resting on corals on the seabed.

Dr Barıs Ozalp told The Guardian that when he went back in March to study the corals, he found that a large number of them had died, likely due to the thick layer of slime covering them.

The slime has since found its way across the Marmara Sea to Istanbul, where it is now coating a miles-long stretch of coastline on the city’s southeast including a port on the nearby island of Buyukada.

Drone footage shot over the Sea of Marmara shows ferries and cargo ships criss-crossing harbours and seawater blanketed with the viscous, greyish substance.

‘The Sea of Marmara’s plight is the outcome of what humans did. This is the outcome of household waste and pollution,’ said filmmaker Tahsin Ceylan, who is making a documentary about the impact of the sea snot.

‘The only thing to do is not to throw your waste into the sea,’ he said. ‘I think nature does not deserve this.’

Mucilage had not been detected in the Marmara Sea until 2007, according to researchers at Istanbul University, but has since become an issue for those who make their living in the waters.

Fishermen say they are hauling in barely a fifth of their typical catch, and that the weight of ‘snot’ is breaking their nets as they attempt to haul them in.

Experts warn the ‘snot’ can also kill marine life by entangling them, clogging their gills, and sucking oxygen out of the water. Corals are particularly vulnerable as they cannot avoid the mucus when it sinks to the seabed.

Environment Minister Murat Kurum said the sea snot was a serious problem and a 300-strong team was assessing dozens of points in the Sea of Marmara as well as water treatment facilities and sources of pollution.

He said the government would bring together all concerned parties on Friday and announce an action plan to protect the sea on Sunday.

Hydrobiologist Levent Artuz warned that such ecological problems will continue unless there is a change in people’s behaviour, including flushing sewage into the water.

‘As long as we carry on with those practices, it does not make much sense to expect different results. We will continue to encounter disasters like this,’ he said.

Small marine animals such as sea-dwelling birds can get caught up in the sticky mass, while fish and corals are often suffocated underneath the giant ‘blanket’ 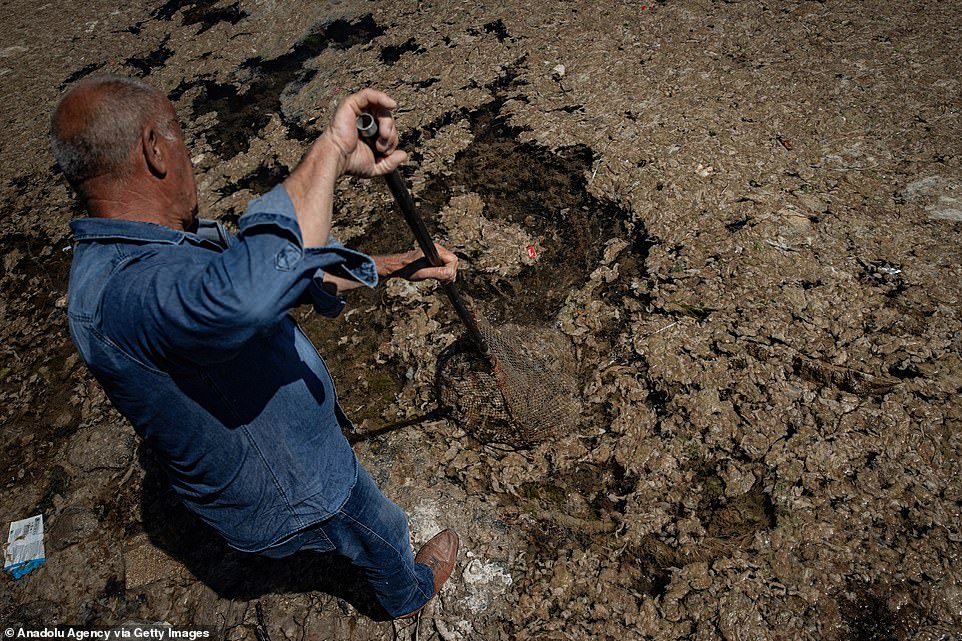 A man cleans ‘snot’ out of the sea using a net, trying to prevent it from causing oxygen in the water to decrease, threatening fish populations on the Maltepe Coast of Istanbul 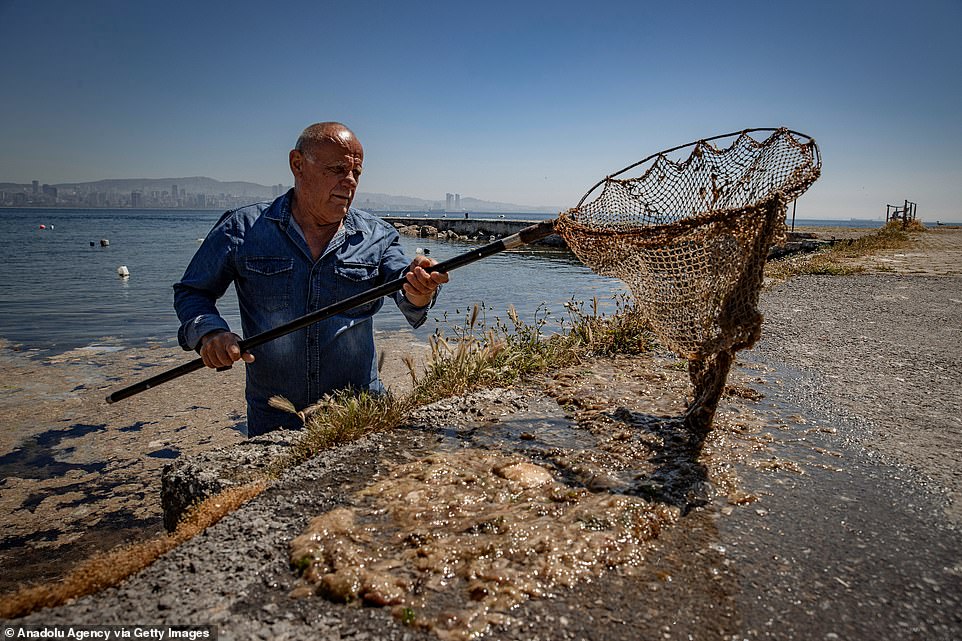 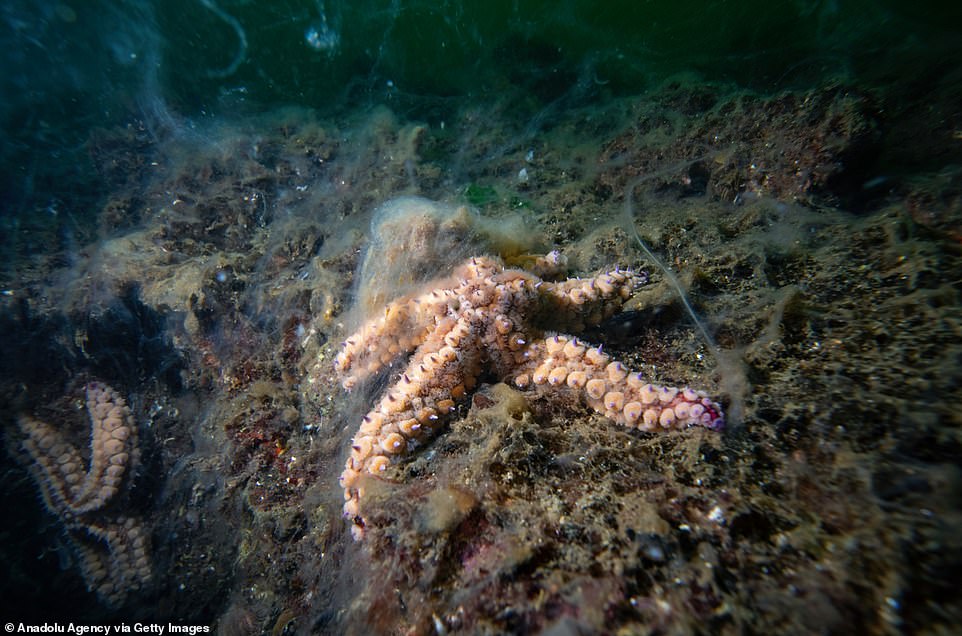 A starfish in the water near Istanbul is seen covered in mucilage, which can suffocate it along with other life such as coral 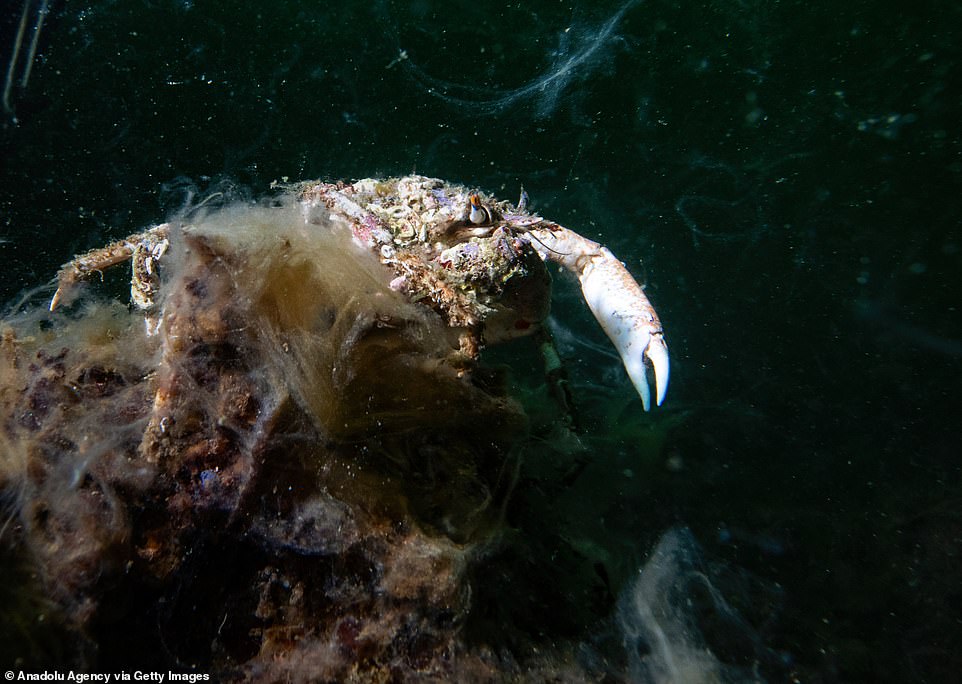 ‘Sea snot’ covers starfish, crabs, mussels, and other creatures 100ft down off Buyukada island in Istanbul 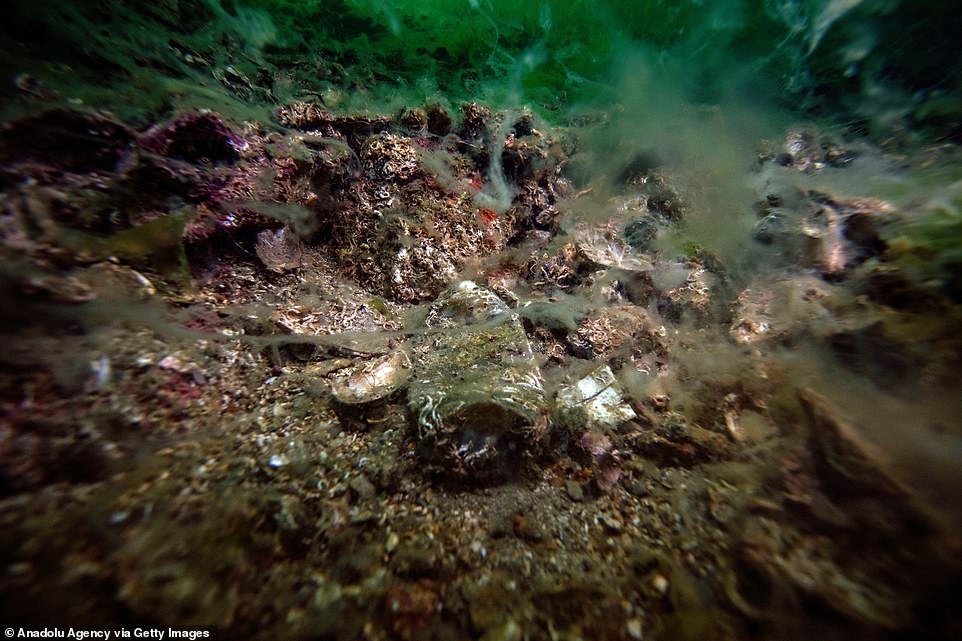 ‘Sea snot’ is seen collecting on the bottom of the ocean near Istanbul, as local fishermen warn it is clogging their nets 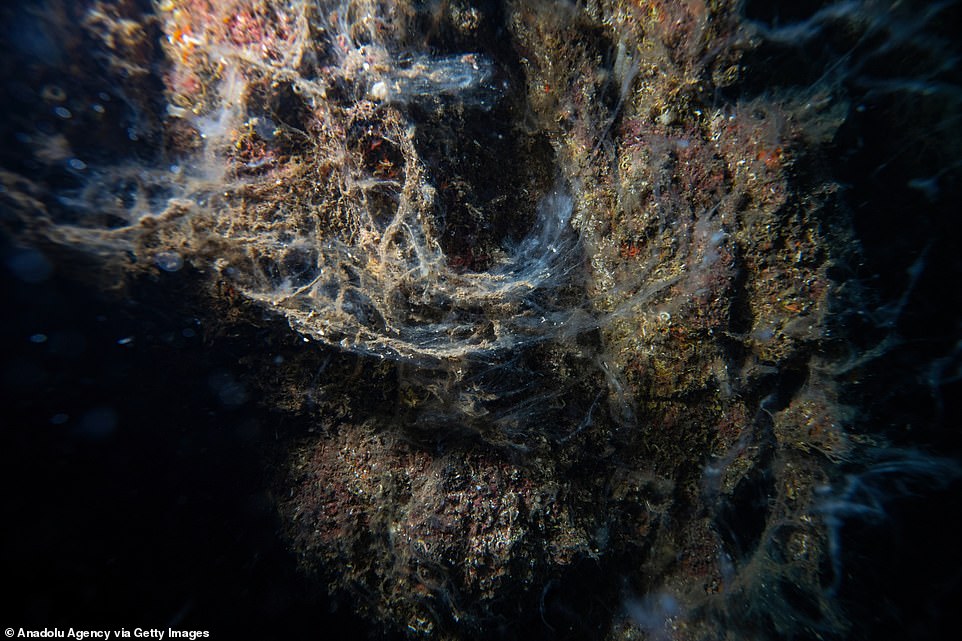 Local officials promise they are coming up with a plan to deal with the slime, and say it will be announced on Sunday