The former Hoffman Brickworks is on the Victorian Heritage Register because of its archaeological, architectural, historical and scientific significance to the state and as a rare surviving example of Melbourne’s brickmaking industry. 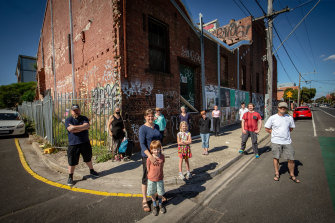 Elisabeth Jackson (middle back, in light blue) with Brunswick residents against the redevelopment proposal.Credit:Darrian Traynor

The site has had a troubled few years, including a fire, roof collapse, weather damage and the discovery of contaminated soil. Next week, the roofing and wall framing of the brick-pressing shed will be demolished after an engineer's report, agreed to by Heritage Victoria and Moreland Council, found it could not be saved.

Residents have been rallying against the next part of the private owner's plans: to tear down the 1884 shed and steam engine house and build an eight-storey, mixed-use apartment building with cafe, underground parking and museum.

The council – which wants any redevelopment to match the existing structures – said the poor state of the buildings should not be used as justification for their demolition. 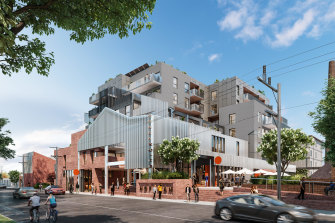 Redevelopment plans for Hoffman Brickworks that have have been lodged with Heritage Victoria.Credit:MGS Architects

"The land owner should not benefit from their failure to properly maintain the buildings and take action to prevent their further deterioration and structural integrity," the council said in its submission to Heritage Victoria in July.

"Our passion for preserving history is evident in our plans submitted for the site in which we showcase a new Hoffman Museum incorporated into the design which further celebrates the history of the site, complete with interactive displays and the original brick-pressing machines," a spokesman said.

Hoffman Brickworks, which bought the disused site in 1996, has already added 600 homes to the precinct and said the only way to properly resolve safety issues is to demolish both the heritage buildings.

Emergency works on the pressing shed, starting next Monday, follows work to make the roof of the steam engine house is safe after it collapsed in June.

Brick-pressing machines would be protected during the works and temporary roofing would be erected over the remaining structure, a letter sent by the owners to residents said. 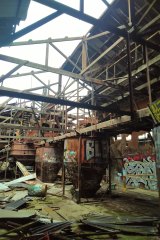 The site is pictured during make-safe work.Credit:Hoffman Brickworks Pty Ltd

Neighbours facing the northern wall of the pressing shed would be unable to use their balconies until the wall is made safe.

Redevelopment plans to build the mixed-use apartment building were first lodged with Heritage Victoria in 2017 before they were withdrawn and resubmitted in July.

The Environment Protection Authority earlier this year issued a compulsory removal notice of contaminated soil, which dates back to the brick-making process, after it was discovered beneath the factories.

The owners have argued this cannot be done while safely retaining the buildings, a position Moreland Council said there was inadequate evidence for.

The National Trust has called on Heritage Victoria to reject the redevelopment plans as they stand.

Simon Ambrose, chief executive of the Victorian arm of the National Trust of Australia, said he was appalled with the state of the heritage buildings and machines. 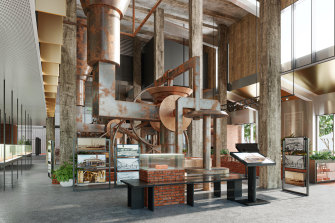 Plans for the Hoffman Museum, to feature six of the brick pressing machines.Credit:MGS Architects

"The current tokenistic plan to demolish the heritage buildings and insert some of the machinery into a primarily commercial and residential development is unacceptable," Mr Ambrose said.

Elisabeth Jackson, vice president of the Royal Historical Society of Victoria and a Brunswick local, wants the buildings to be restored with the original machinery.

"We just need to stand firm on this," said Ms Jackson, who was mayor of the former Brunswick council in the 1990s. "They need to be called to account and to spend money on fixing it up, as they were always supposed to."

Mr Ambrose said the original Hoffman Brickworks "created the building blocks of marvellous Melbourne", noting their bricks and terracotta tiles were said to have been used at Parliament House.

"We are working closely with Moreland City Council to manage the safety challenges of this site while retaining as much of the important historic buildings and equipment as possible."