Police battle to stop illegal raves including 140 revellers on boat

‘Covid? I need to get off my nut’: With nightclubs closed, police are battling to stop illegal raves blamed for spreading the virus… including 140 revellers cramming onto a canal boat in East London for brazen drugs party

Soaked in sweat, random strangers hugged each other as music blared out. Class A drugs were openly handed around and consumed with abandon. Revellers who had overdone it were violently ill in front of fellow partygoers.

Yet far from being a description of the goings-on in one of the Ibiza super-clubs during the pre-coronavirus era, these were the scenes on a barge moored on the River Lea in East London in the early hours of yesterday, as scores of people gathered for an illegal rave.

Despite growing evidence that these gatherings will reignite the spread of Covid, about 140 people turned up to pay the £15 entry fee. 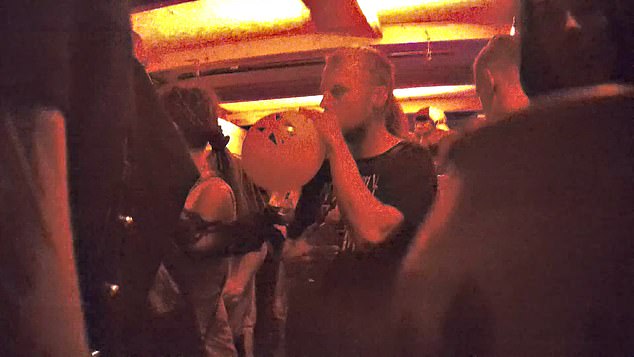 A man is seen inhaling laughing gas from a balloon. Soaked in sweat, random strangers hugged each other as music blared out. Class A drugs were openly handed around and consumed with abandon

After the first 80 were let on board, the others had to wait outside as a one-out, one-in system was implemented.

But that was the only token nod to social distancing. One reveller, who was enjoying a night off from his job as a sommelier at a five-star hotel, summed up the mood when he exclaimed gleefully: ‘F*** Covid. This is illegal, but why shouldn’t we be allowed to have a good time? I’ve heard you can get fined £10,000 for holding one of these but after lockdown I need to get off my nut.’

An Australian living in London added: ‘There’s nothing like this over there. This is amazing. Yes, people are dying – and, yes, this is bad.

‘But you can die from anything, so you might as well just party. We want to party.’

Within minutes of climbing aboard and being directed into a windowless party room, undercover Mail on Sunday reporters were offered a gram of cocaine for £50 by the ‘resident’ dealer. The same woman happily passed canisters of nitrous oxide – so-called ‘hippy crack’ – to partygoers from behind the DJ booth.

One man brazenly snorted white powder off the bar after cutting it into lines using an Oyster travel card. Another offered the horse tranquiliser ketamine to our team at £60 a gram. 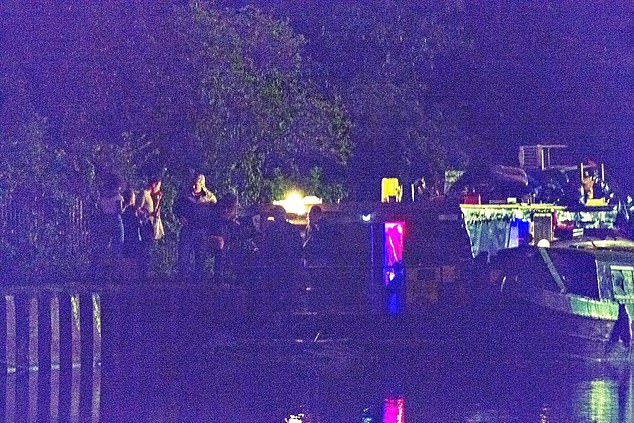 The canal barge is pictured above. Despite growing evidence that these gatherings will reignite the spread of Covid, about 140 people turned up to pay the £15 entry fee

At one point, a dealer pushed a 15-gram rock of MDMA – the chemical component of Ecstasy – into a reporter’s hand and bragged: ‘See, it’s the real deal – just £40.’

Outside, a man dipped a key into a small, see-through plastic sachet, or ‘baggie’, scooped out a quantity of white powder – thought to be cocaine – and handed it to the woman beside him.

Against that backdrop, it is hardly surprising that the authorities are facing an uphill battle to enforce social distancing and put an end to late-night revellers causing mayhem in local communities.

The closure of nightclubs and the banning of gatherings of more than 30 people has forced these dance events underground and, in some instances, into the hands of criminal gangs. 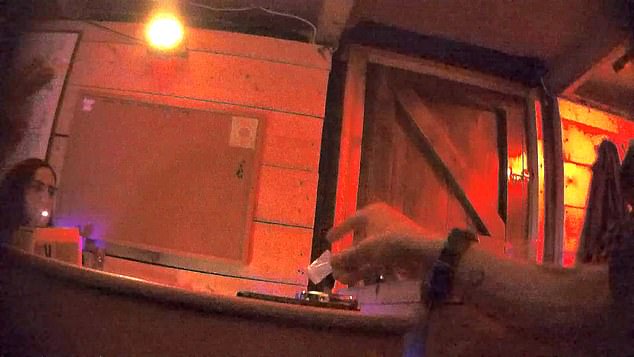 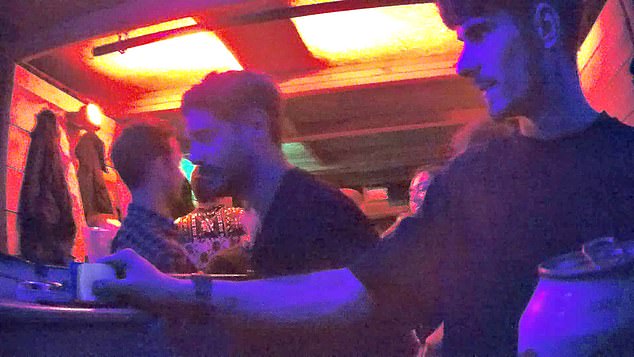 Last week, the Metropolitan Police revealed that officers were called to break up 200 parties in one weekend alone, while more than 1,000 unlicensed music events had been held in London since June.

West Midlands Police received reports of 125 raves and parties over a single weekend earlier this month.

The Mail on Sunday has also discovered unscrupulous companies – including ticketing sites, minibus companies offering to ferry party-goers, and even teams of private event paramedics – cashing in on the situation.

Eventcube, which boasts of working alongside the O2 venue and which has been used for 100,000 events worldwide, has hosted a string of illegal raves on its site, including one last week called Juiced Up: Ldn.

A poster for the event and link to the Eventcube ticket page was advertised on private social media groups and messaging channels.

Another rave, billed as Carnival Sunday and featuring seven DJs, is set to be held at a ‘secret location’ in South London over next week’s Bank Holiday weekend.

Our reporters were able to set up an event organiser’s profile on Eventcube without any checks on our identity or background. The company, founded by William Troup, a 43-year-old supporter of former Labour leader Jeremy Corbyn, charges between £29 and £99 a month to members and up to three per cent per transaction.

It claims to have processed over 35 million tickets since it was founded in 2014 and has worked alongside some of the world’s biggest event organisers.

Mr Troup’s company is based in East London and has offices in Turin, Lisbon and America.

The company website also boasts of its ‘deep respect for human beings inside and outside our company and for the communities and environment in which they live’.

Elsewhere, on one private Facebook page, a minibus company, which typically offers airport runs, boasted that it had provided transport for partygoers at a rave held at an old RAF base near Bath and attended by 3,000 people. The rave, dubbed a Scumerset Free Party, was so large that police were unable to bring it to a stop.

The minibus firm owner, in conversation with an undercover reporter, said he could provide services for illegal raves and had ‘done loads’ of similar events over the past couple of months.

A private team of paramedics was even offering its services on a Facebook page dedicated to rave events in the Midlands last week. Senior officers have told how events are often targeted by drug gangs, while they can also be linked to organised crime.

A police source told the MoS that forces were struggling to cope with the volume of parties being held each weekend.

They added that events were being organised by ‘organised criminals, rival gangs looking to get one up on each other, music producers, DJs and event groups of friends. It’s a real mix’. ‘Irrespective of the links to criminality and drug dealing, we’re also very concerned about the potential for the spread of Covid,’ the source said.

‘It’s not just about the typical criminality but also who is providing the equipment and facilitating these events. They are illegal.’

Forces across the country have reported a number of illegal raves and parties, but officials have told how the problem is more often seen in and around urban areas.

Greater Manchester Police have disrupted some of the largest raves documented by officers, including two in June attended by 4,000 people in Droylsden and 2,000 in Carrington. 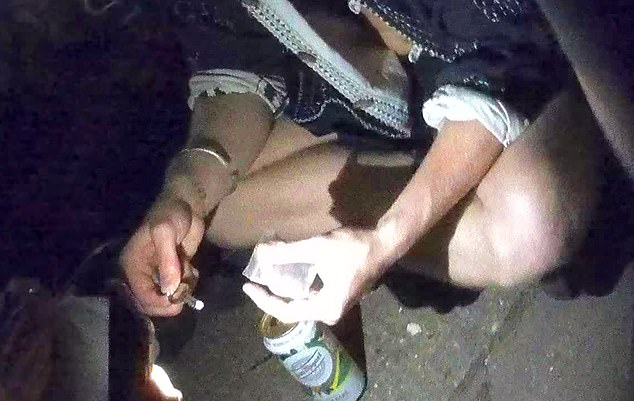 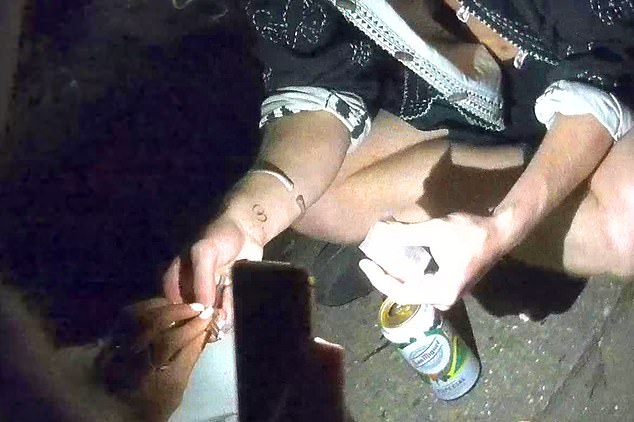 And hands to young girl 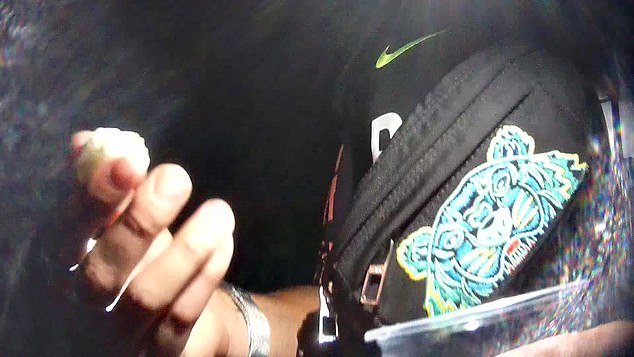 A giant rock of MDMA is seen above

‘These events are hosted without regard for the safety of those attending, and police have observed cases of anti-social behaviour, sales of drugs and gang activity.

‘We ask anyone thinking of attending a block party or a rave to avoid doing so.’An Eventcube spokesman, who pointed out one of the events was also hosted on another ticketing site, said: ‘Eventcube has not organised illegal raves, nor do we condone them.

‘We provide self-service ticketing software which event organisers use for a range of events from business conferences to yoga retreats.

‘All event organisers are required to confirm their event is both licensed and adheres to Covid-19 distancing guidelines.’