One killed,eight injured as migrants scale wall around African enclave

One man has died and eight people have been injured after 300 migrants tried to storm a border fence around the Spanish enclave of Melilla in north Africa.

The man, whose identity and nationality were not known, died after falling 16ft from the fence, and medics were not able to revive him.

‘It was dark, the area was unknown and it seems like he fell,’ the spokesman said, adding it was not clear if the migrant died from injuries sustained in his fall of from a heart attack. 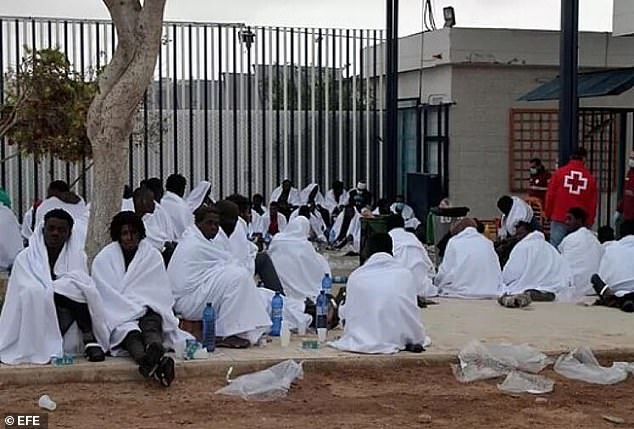 One man has died and eight have been injured after a group of migrants tried to climb a border fence around the Spanish enclave of Melilla, in north Africa (file image)

Another eight migrants were lightly injured, mainly with bruises, as well as three police officers, including one who dislocated his soldier, he added.

‘It was not a violent assault, there was just the typical pushing of those trying to get in who we did not let through,’ the police spokesman said.

About 30 of the roughly 300 migrants who stormed the triple barbed wire fence which separates Melilla from Morocco managed to get into the tiny Spanish territory, the statement said.

The rest were ‘intercepted and rejected’ by Moroccan security forces, it added.

It was one of the largest such mass attempts to cross over the border into Melilla, which along with Spain’s other North African enclave of Ceuta, have the European Union’s only land borders with Africa and are regular flashpoints for African migrants. 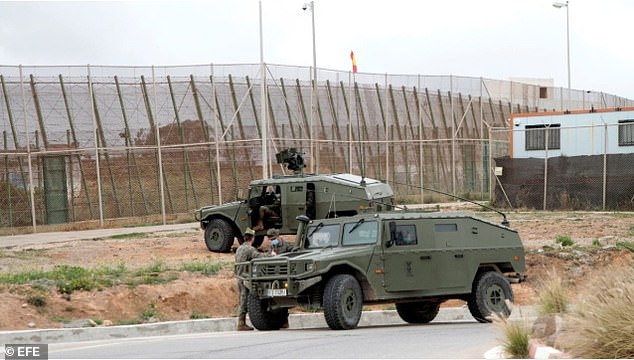 Guards said migrants tried to scale the fence overnight and one man slipped and fell 16ft to the ground. Medics said it is not clear if he died from the fall, or a subsequent heart attack

Lockdown measures introduce to fight the coronavirus pandemic have reduced the arrival of migrants in the enclaves.

During the first seven months of the year, 3,136 migrants managed to enter Ceuta and Melilla, compared to 3,136 during the same time last year, according to interior ministry figures.

But in contrast the number of migrants who have arrived in Spain’s Canary Islands off the west coast of Africa has hit 3,136 during the period, a seven-fold increase over last year.

Spain’s maritime rescue service discovered a boat near the archipelago on Wednesday with eight-10 dead migrants on board, and at the beginning of the month at least 27 migrants who were trying to reach the Canaries died when their vessel failed off the coast of Mauritania.