'No-deal' could cause drug and food shortages in UK 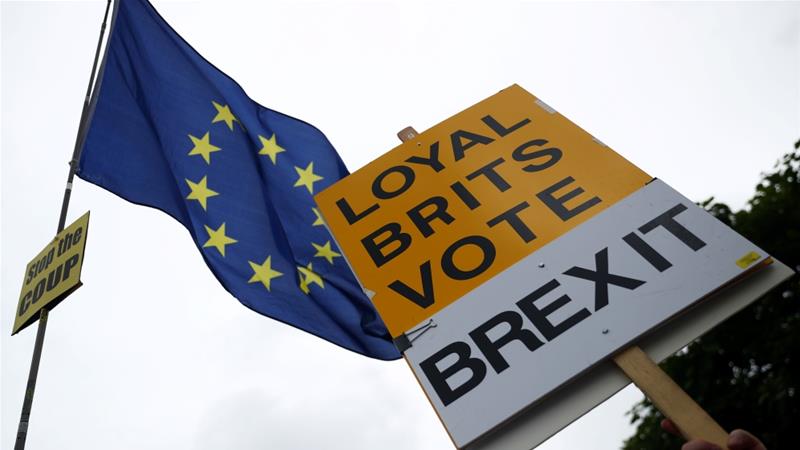 The British government’s plans for a “no-deal” Brexit highlight “severe risks” including disruption to supplies of medicine and fresh food that could unleash protests and public disorder.

“Operation Yellowhammer” – government documents outlining worst-case scenarios of crashing out of the European Union without an agreement – was published on Wednesday by the government of Boris Johnson and forms the basis of its planning.

It analyses the negative consequences if the UK leaves the EU on October 31 without a divorce deal.

The plan said that public and business readiness for such an outcome would likely be low, in part because of continued political confusion in the run-up to Brexit day.

Lorries may have to wait up to two-and-a-half days to cross the English Channel, and British citizens could be subjected to increased immigration checks at EU border posts.

“Certain types of fresh food supply will decrease,” it said. “There is a risk that panic-buying will cause or exacerbate food supply disruption.”

The British territory of Gibraltar could be particularly badly affected, it said, because of the imposition of checks at its border with Spain.

Disputes could also flare up in fishing areas with non-British vessels still active in British waters, while “there may also be a rise in public disorder and community tensions”, said the assessment.

The plans confirm the “severe risks” of a no-deal Brexit scenario, the Brexit spokesman of the UK’s main opposition Labour Party said.

“It is also now more important than ever that Parliament is recalled and has the opportunity to scrutinise these documents and take all steps necessary to stop no deal,” Keir Starmer said on Wednesday.

‘No place to hide’

Drew Hendry from the Scottish National Party told Al Jazeera from Inverness the information in Yellowhammer “doesn’t come as a surprise”.

He said it has been a pattern of the Conservative government to try and deny the realities of a no-deal Brexit.

“Some of these things are very serious indeed,” said Hendry, adding it was “unacceptable” the British people should be the ones to pay for crashing out of the European Union without an agreement.

The release of the documents leaves the government with “no place to hide”, Hendry said, as everyone now sees in “black and white” the economic and social harm a no-deal would cause the UK.

“And for him [Johnson] to still be saying ‘come what may’, ‘die in a ditch’ … ‘we are leaving on the 31st of October’ is reprehensible,” he added.