THE NHS Test and Trace programme is not yet 'gold standard' – as the first figures show a third of Covid-infected Brits could not be traced.

Nearly 27,000 people were ordered to self-quarantine during the first week of the contact tracing scheme, new NHS stats reveal. 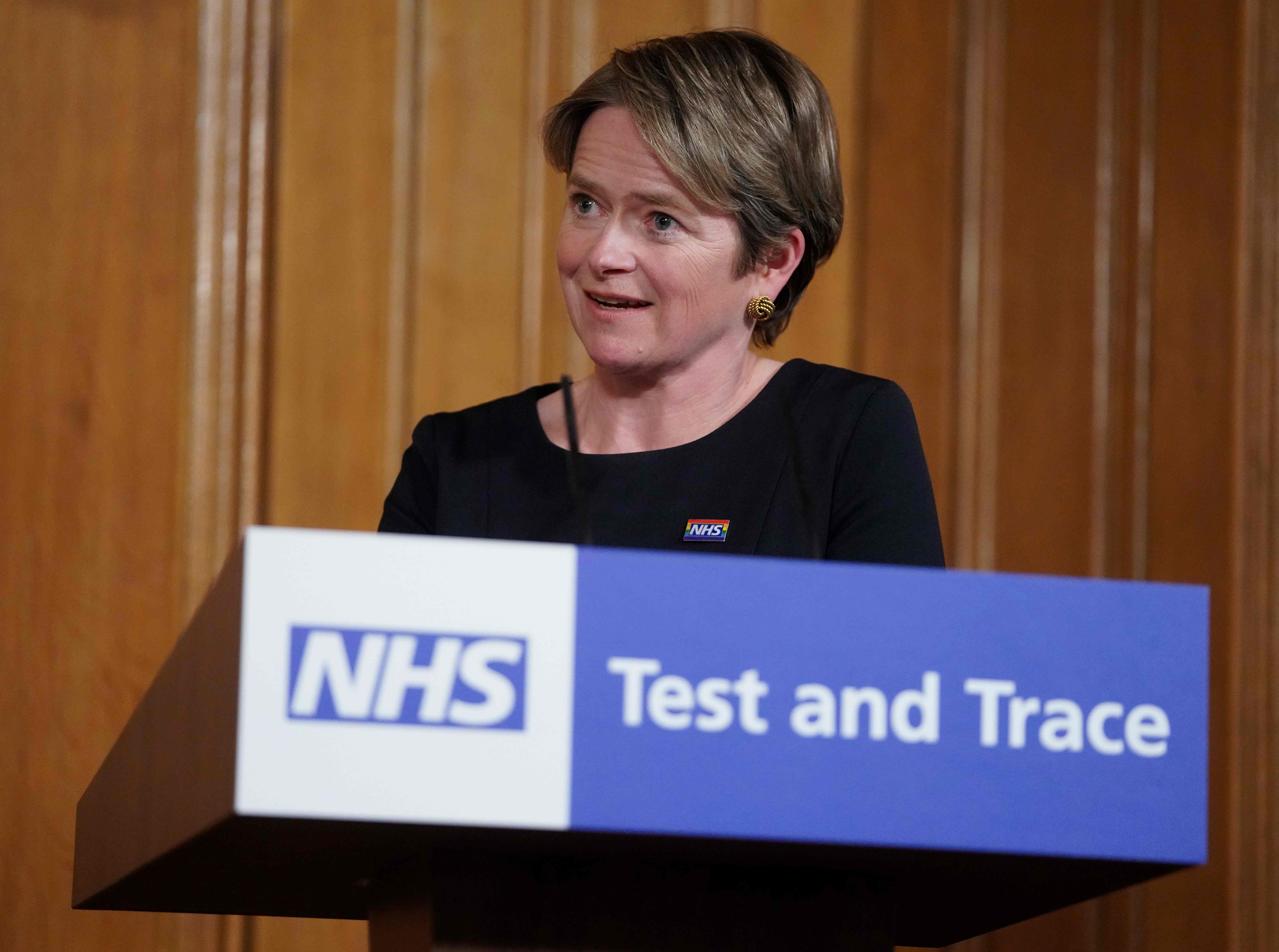 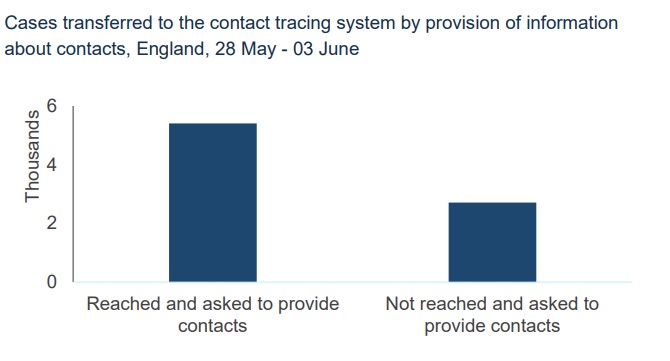 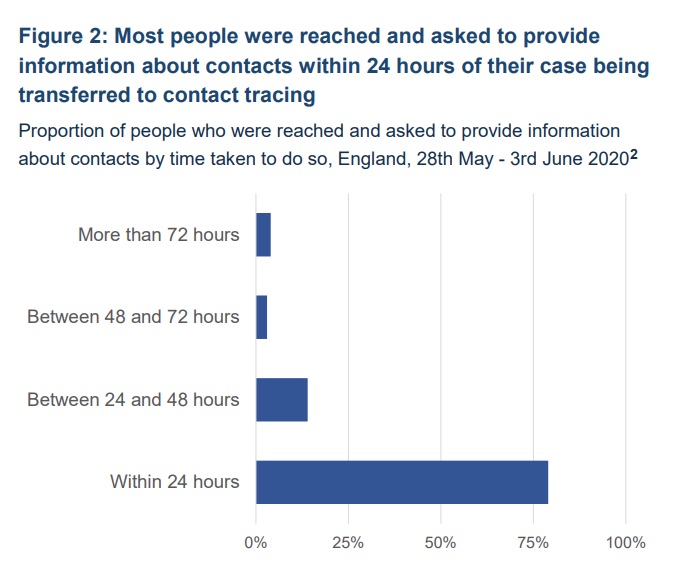 But one in seven close contacts of infected patients were missed – raising the risk they could continue to spread Covid.

Speaking at tonight's Downing Street briefing, Health Secretary Matt Hancock, reminded the public it is "your civic duty" to take part in the proramme.

He said: "You have your part to play, you must isolate and get a test.

"You must work with test and trace to identify who you have been in contact with and if you are asked to isolate you must do so.

The new army of tracers attempted to reach 8,117 people who tested positive for the killer bug.

But, of the remaining 15 per cent, some were not contacted, others said they were already taking action and some simply refused to comply.

'Not yet Gold standard'

Test and Trace chief, Baroness Dido Harding, admitted today that improvements are needed, but said the system was "fit for purpose".

"We are not at the gold standard yet that we want to be, of isolating all contacts within 48 hours of someone requesting a test," she said.

"But you can absolutely see the path of how we are going to get there." 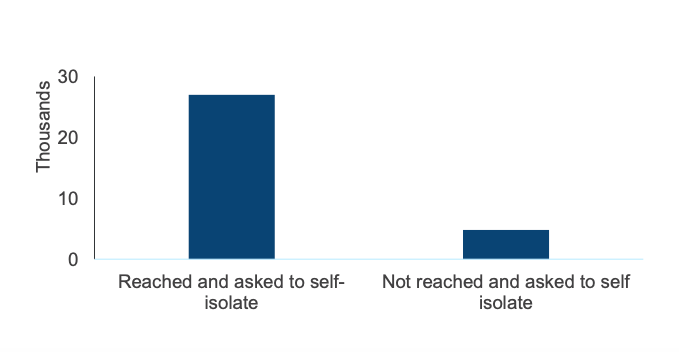 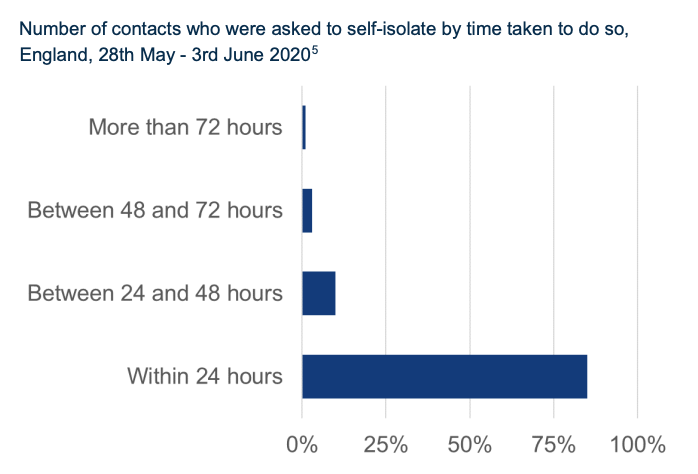 Lady Harding said the scheme would get better over the course of the summer.

"Is it completely perfect? No, of course it isn't," she said.

"Is there stuff that we all need to do better? Yes there is."

She was unable to give a date for the launch of the app which will form part of the test and trace programme she leads.

The app "is the cherry on the cake, it's not the cake itself and what you are seeing today is the first baking of the cake is going reasonably well", she said.

The programme said the number of people reached includes those who provided details about recent contacts or whose cases have been investigated as part of an outbreak.

The number that were not reached includes those where contact details were unavailable or incorrect, or where there has been no response to text, email and call reminders.

It also includes people who the service has been able to contact but who have not provided information about contacts.

Time is of the essence

Four in five infected people were dealt with by trackers within 24 hours of their positive result, the stats show.

But for one in 25 cases, it took longer than three days.

Contact tracers identified 31,794 people who were at high risk of being infected and must self-isolate.

Experts say the figures are "a good result" but have raised concerns that contacts are only being told to self-isolate and not given a test, as many other countries are doing.

Prof Mark Harris, a virologist at the University of Leeds, said: “These stats are encouraging but of course there is room for improvement.

"In particular only 67 per cent of positive individuals could be reached for a number of operational reasons, for example, they had the wrong contact details.

Why are they not being tested, as is undertaken in other countries?

“What is both surprising and concerning is that the contacts identified are only being asked to self-isolate for two weeks. Why are they not being tested, as is undertaken in other countries?

"By testing contacts we will also be able to identify other infected individuals and broaden the scope of the contact tracing to the next tier of contacts."

Prof Keith Neal, an epidemiologist at University of Nottingham, said: “Eighty-five per cent of contacts being reached is a good result, but we don’t know how many will self isolate for two weeks. The more that do the better.

“An absolutely crucial part of the test and trace system is the public committing to it – the system can not work without the public’s involvement.”

Boris Johnson claimed there has been an “extraordinary degree” of public compliance.

Speaking in the Commons yesterday, the Prime Minister said he was "encouraged" by the progress NHS Test and Trace is making.

He said officials are now able "to identify hot-spots to do whack-a-mole to stamp out outbreaks of the epidemic where they occur".

Meanwhile, Matt Hancock said the service is a vital part in easing the lockdown – and he urged every Brit to play their part.

The Health Secretary said: "The service is key to helping us return to a more normal way of life.

"The new data shows how we are already helping to stop the spread of the virus with tens of thousands of people booking a test, isolating and sharing their recent close contacts.

"We need everyone's support and collaboration to ensure that we can continue to keep infections falling."

The official statistics will cover the first week of the service, which began on May 28.

More than 12,500 Brits tested positive in that period, with an army of 25,000 trackers chasing down those who were near them in order to slash the spread of the bug.

The programme has been marred with teething problems, including testing delays and staff being axed after complaining of nothing to do. 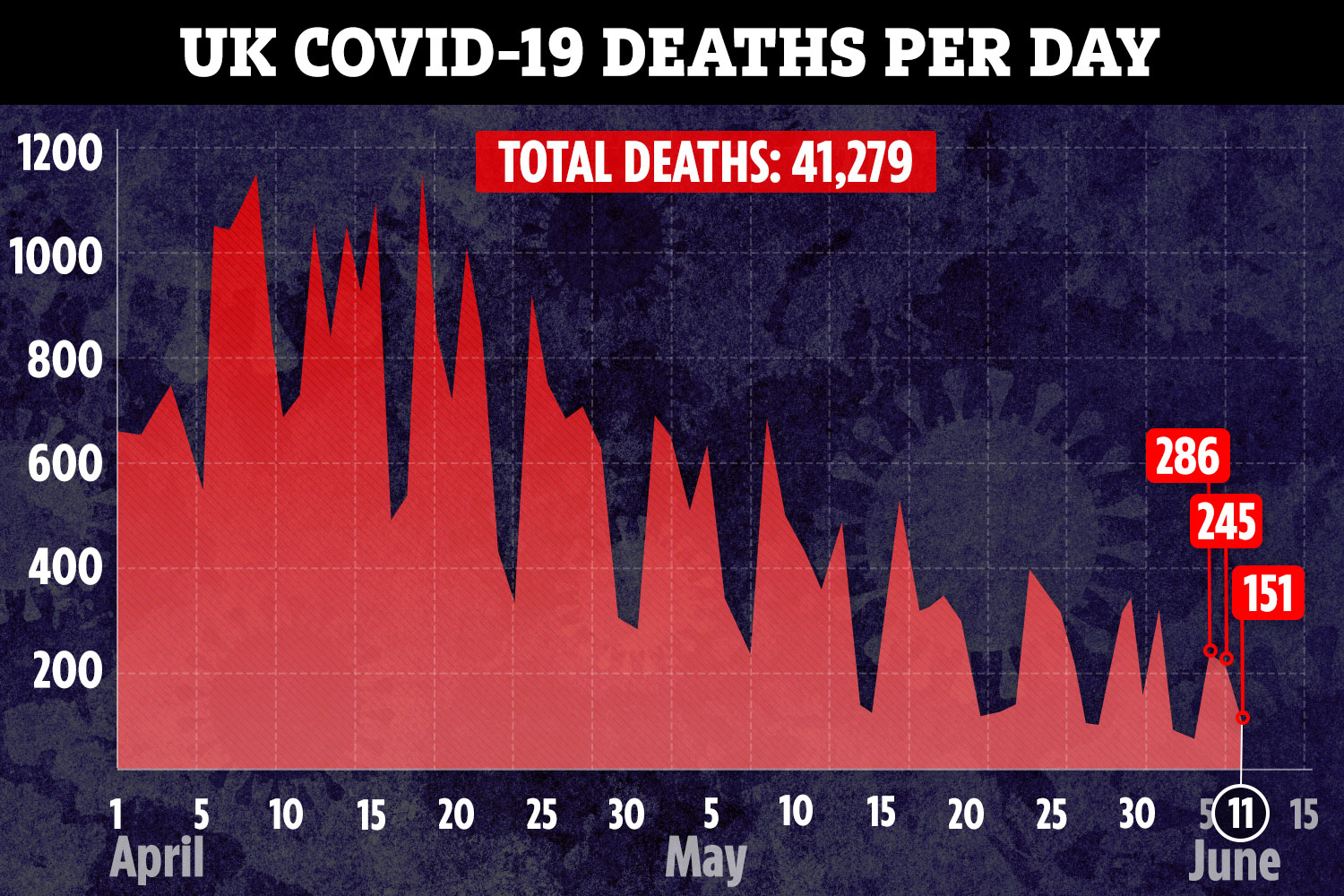 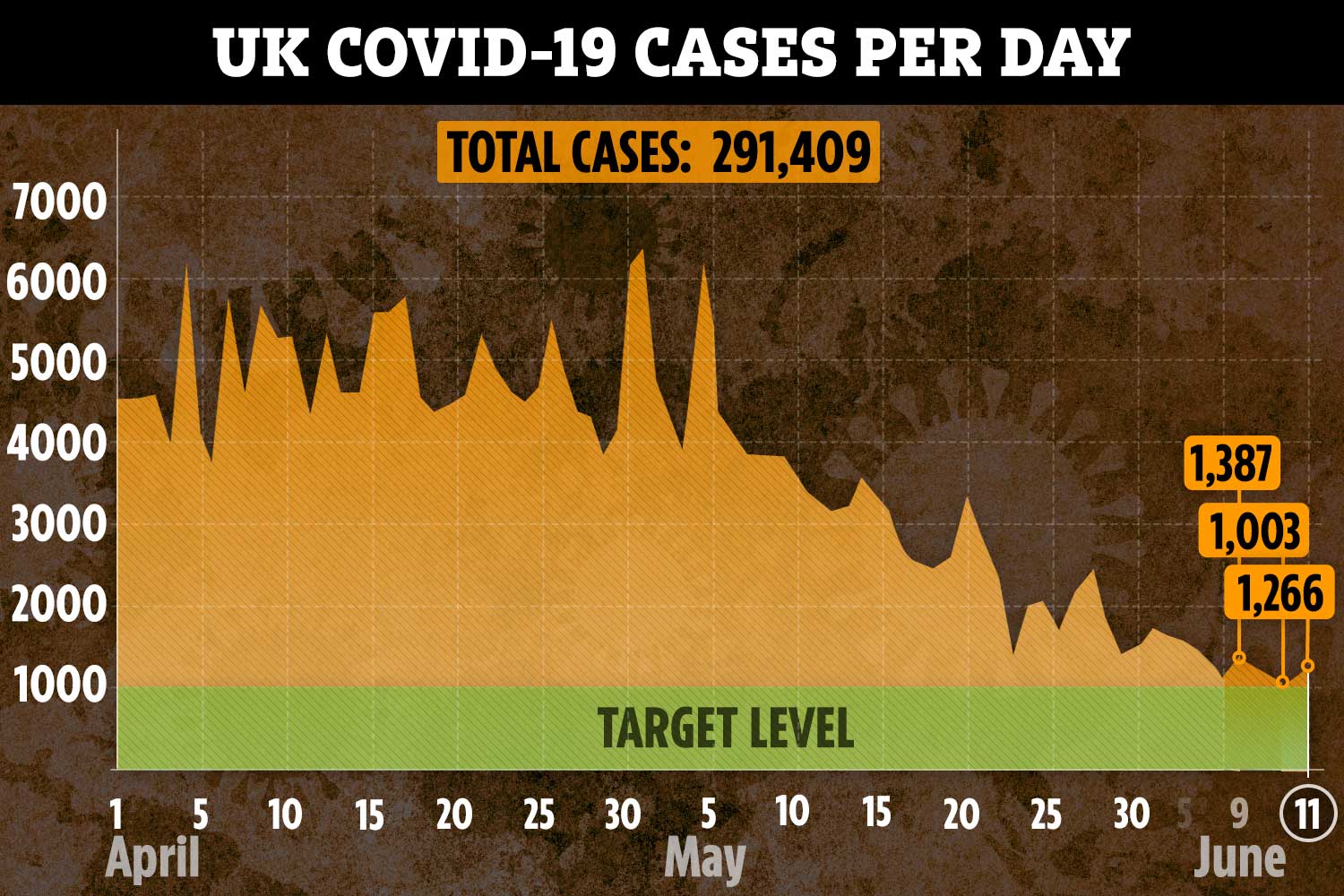 Officials plan to release Test and Trace data every Tuesday from next week.

The Office for National Statistics estimates 5,600 Brits a day are currently catching the bug.

However, only 1,387 positive checks for the virus were reported on Tuesday – suggesting three-quarters of cases are being missed.

In Scotland, 741 contacts have been traced through its Test and Protect scheme.

Nicola Sturgeon said these individuals were tracked and isolated between May 28 and June 7.

Matt Hancock yesterday admitted he still cannot say when the Government's contact-tracing app will be ready – almost a month after it was slated to launch.

The Health Secretary told the CogX technology conference that trials are continuing on the Isle of Wight.

He said: "The app is progressing and we will launch it when the time is right. I am not going to put a date on it.”

He said persuading people to self-isolate if they had been in contact with someone with the disease was better done by humans – not tech.

CORONAVIRUS CRISIS – STAY IN THE KNOW

Don't miss the latest news and figures – and essential advice for you and your family.

To receive The Sun’s Coronavirus newsletter in your inbox every tea time, sign up here.

Get Britain’s best-selling newspaper delivered to your smartphone or tablet each day – find out more.

He told a Chatham House briefing on Covid: "We do know though that you can't replace that human element of contact with people who are sick, to identify their contacts, and then contact face to face with those contacts to make sure they understand what their responsibilities are.

"And also to identify contacts of them, should they become sick.

"So apps are going to be important to evaluate. I would volunteer to do it, but in the future they may have more of a role than they do now.”