The first presidential debate between President Donald Trump and former Vice President Joe Biden was a train wreck: Trump trampled over both Biden (who at one point implored Trump to “shut up”) and moderator Chris Wallace, who later said he had “never been through anything like this.”

NBC News correspondent Kristen Welker was in charge of moderating Thursday’s second and final presidential debate in Nashville, Tennessee, and a calm debate this time around seemed unlikely, since Trump repeatedly trashed Welker this week as “extraordinarily unfair” and “a radical left Democrat, or whatever.”

But Welker, the first Black woman since 1992 to moderate a presidential debate on her own, did an exceptional job that received wide praise. She asked tough, substantive questions while ensuring that the debate moved at a productive pace. Many colleagues applauded her for being respectful, but not backing down from fact-checking both candidates on big issues.

“As of tonight, more than 12 million people are out of work and as of tonight, 8 million more Americans are born into poverty and more families are getting hungry every day. Those hit hardest are women and people of color,” Welker said before asking Trump a question about the coronavirus. “They see Washington fighting over a relief bill. Mr. President, why haven’t you been able to get them help they need?”

When Trump blamed Speaker of the House Nancy Pelosi (D-Calif.) for not approving it, Welker quickly responded: “But you’re the president.”

Welker’s showing was in stark contrast to the first and only other presidential debate, which CNN’s Jake Tapper described as “a hot mess inside a dumpster fire” because the two candidates repeatedly yelled and spoke over one another. It was so bad that the Commission on Presidential Debates implemented the ability to mute candidates’ microphones when their speaking time ran out in subsequent debates.

On Thursday, producers used the mute button to cut Trump’s mic twice throughout the 90-minute debate.

Welker did not let up on Biden either, asking him tough questions about how he plans to revive the economy after supporting shutdowns to fight the spread of COVID-19.

“You said you would support new shutdowns if scientists recommended it. What do you say to Americans who are fearful that the cost of shutdowns, the impact on the economy, the higher rates of hunger, depression, domestic and substance abuse, outweighs the risk of exposure to the virus?” Welker asked Biden.

“So how will these families ever be reunited?” Welker asked the president.

Trump leaned on racist stereotypes ― claiming migrant children are brought to the U.S. by “coyotes” and “cartels” ― and attempted to pivot, but Welker was not having it. “But how will you reunite these kids with their families, Mr. President?” she repeated, only to ask the question one more time in response to Trump’s retort.

“Kristen, I will say this. They went down, with reporters and everything, and they are so well taken care of. They are in facilities that were so clean,” Trump said of the migrant children being held in detention centers. (Reports at the time stated that many children were living in “appalling” conditions; some were denied medical care and were not given access to basic necessities like toothbrushes and soap.)

Before questioning Biden’s decisions related to former President Barack Obama’s murky immigration policies, Welker reminded Trump yet again that some of the migrant children still “have not been reunited with their families.”

Welker also pushed both candidates on the topic of race in America, asking Trump and Biden if they understand the fear that people of color — especially parents of Black and brown children — feel regarding racism and police brutality. She questioned both candidates’ records on policing and ensured that each was able to respond to the other’s accusations without too much crosstalk.

At one point, Welker asked Trump to explain some of the ways he has responded to the Black Lives Matter movement. “You’ve shared a video of a man chanting ‘white power’ to millions of your supporters, and you have said that Black professional athletes exercising their First Amendment rights should be fired,” Welker said. “What do you say to Americans who say that kind of language from a president is contributing to a climate of hate and racial strife?”

Trump responded that he has “great relationships with all people” and told Welker, a Black and Native American woman, that he is “the least racist person in this room.” Instead of bristling at Trump’s statement, Welker continued to push the president on his divisive rhetoric.

Many viewers applauded Welker for being level-headed, tough and fair.

“Kristen Welker is putting on a master class in how to moderate a presidential debate,” tweeted Philip Rucker, White House bureau chief for The Washington Post.

Biden commended Welker on her performance, telling reporters after the debate he “thought the moderator did a great job.” Even Trump complimented the NBC News correspondent, telling Welker at one point that he “very much” respected the way she was handling the debate.

We want to know what you’re hearing on the ground from the candidates. If you get any interesting — or suspicious! — campaign mailers, robocalls or hear anything else you think we should know about, email us at [email protected]. 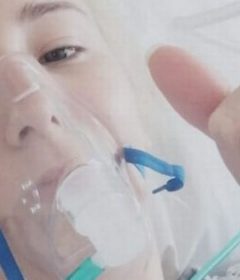