Mike Pence backs out of fundraiser hosted by QAnon supporters 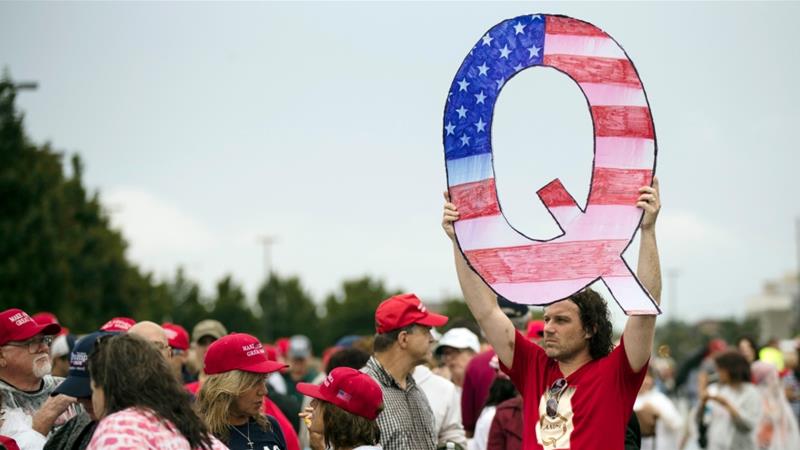 The US president’s re-election campaign told The Associated Press news agency on Saturday that Pence’s schedule had been changed, but the campaign did not provide a reason why or say whether the fundraiser might be held at a later date.

The change comes after the news agency reported on Wednesday that hosts Cayrn and Michael Borland in Bozeman, Montana, had shared QAnon memes and retweeted posts from QAnon accounts.

The baseless and diffuse QAnon conspiracy theory alleges, among other things, that Trump is battling an entrenched bureaucracy and a sex trafficking ring run by paedophiles.

The FBI has deemed the theory – which, while still marginal, is increasingly creeping into mainstream US political discourse – a potential “terrorist” threat.

Three Republicans seeking election in Montana had also been scheduled to attend the fundraiser: US Senator Steve Daines, who faces a November challenge from Democratic Governor Steve Bullock; US Representative Greg Gianforte, who is running for governor; and state auditor Matt Rosendale, a candidate for the US House.

Pence has said QAnon is a conspiracy theory and last month told CBS, “I don’t know anything about QAnon and I dismiss it out of hand.”

Trump, however, has not said outright that QAnon is false and even has had positive things to say about supporters and Republican Party candidates who embrace the movement.

In August, Trump called QAnon supporters “people that love our country”, while maintaining he did not know “really anything” about the actual underlying conspiracy theories.

He also congratulated Georgia congressional candidate Marjorie Taylor Greene, who has in the past supported QAnon and made xenophobic and racist comments on social media, after her primary win last month.

“Congratulations to future Republican Star Marjorie Taylor Greene on a big Congressional primary win in Georgia against a very tough and smart opponent. Marjorie is strong on everything and never gives up – a real WINNER!” Trump tweeted at the time.

Under state law, the window appears to have closed for Democrats to put forward another candidate, leaving Greene to run unopposed in the already overwhelmingly conservative district.

While other congressional candidates have voiced varying degrees of support for the broad QAnon conspiracy theory, Greene currently has the most direct path to a seat in the US legislative chamber.

Greene in 2017 referred to “Q”, the mythical person at the centre of QAnon, as a “patriot” who “very much loves his country” and is “on the same page as us”. After winning the primary, however, she told Fox News she has started questioning certain aspects of QAnon.

Best wishes to @KevinVanAusdal, who stepped down from the #Ga14 race today.

According to the Southern Poverty Law Center’s Hatewatch, which monitors far-right groups in the US, Greene also incorporated into her campaign messaging from far-right organisations.

Greene has also suggested that Muslims were trying to infiltrate Congress, and she recently posted a photo on Facebook of herself holding a gun next to images of Democratic representatives Alexandria Ocasio-Cortez, Ilhan Omar and Rashida Tlaib.

Text posted with the image urged people to go on the “offense against these socialists”. Facebook later removed the photo.