Home » World News » Members of the far-right, including a Proud Boys leader, were reportedly stabbed during an altercation in Washington, DC

Members of the far-right, including a Proud Boys leader, were reportedly stabbed during an altercation in Washington, DC 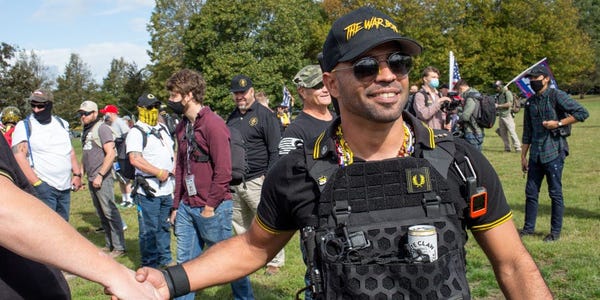 Several conservative activists, including multiple members of the far-right group the Proud Boys, were reportedly stabbed Wednesday in an altercation in the early morning hours in Washington, DC.

Washington, DC, police told Insider that they received a report about the stabbing, which occurred in the 1400 block of New York Avenue, at 2:26 a.m.

According to WJLA, DC police said the stabbing victims were two men and one woman, and all three were taken to a local hospital. While the victims told police the perpetrators were members associated with the Black Lives Matter movement, there was no evidence currently to substantiate those claims, according to the report.

DC police told Insider it could not "verify any specific affiliation of the suspects" and said its investigation was ongoing.

The Proud Boys, which recently received a shoutout from President Trump, was founded in 2016 and is an extremist "fraternity" and is classified as a hate group by the Southern Poverty Law Center. The group has been associated with recent incidents of violence in the US, as Insider's Rachel E. Greenspan previously reported.

Tarrio did not immediately return Insider's request for comment, but told far-right news outlet The Gateway Pundit that he had been "slashed in the stomach." He told the outlet his injuries weren't serious.

In a seven-minute video posted to Instagram from a hospital bed, Beatty, while criticizing the Black Lives Matter movement, said she and two other people were stabbed after they had left Harry's Pub, a bar in DC not far from the White House.

She said as they were watching the president's speech, a group of "three young Black kids" approached a nearby man and lobbed verbal insults. She and her group intervened because she believed the group was attempting to rob the man. When they did, they were attacked, she said.

"This is the one time I was being careful and just hanging my friends and trying to figure out what was happening with the election," Beatty, who is known for defacing Black Lives Matter murals, said from her hospital bed. "These kids came out to attack and fight. I think they were planning to rob the man. These were kids from the hood. These are the kids that BLM protects."

Beatty said she was stabbed three times in the back, causing one of her lungs to partially collapse and damage to her liver. Video of the incident shared on social media shows a chaotic scene, ending with Beatty walking away while grabbing her back, yelling that she was stabbed.